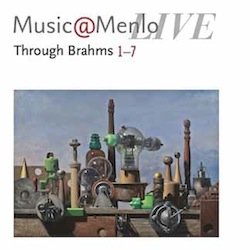 One of the several admirable aspects of the South Bay’s [email protected] Festival is the organizers’ devotion to audience education through thematic programming — to trying to tie individual programs, and the festival as a whole, to some aspect of musical history. Last year’s theme was Johannes Brahms, his predecessors, his emulators, his successors, and his friends. Thanks to another admirable practice — that of putting selections from each year’s highlights on disc for release the following year — both the caliber of the performances and the weaving together of the historical skeins the planners teased out can be enjoyed even if, like me, you couldn’t be there.

Naturally, the majority of the disc space in the 2011 seven-disc box set (the discs are also sold individually) goes to Brahms himself. A good selection of the major chamber works from throughout the composer’s career are here, ranging from the First String Sextet (Op. 18) of 1860 (the only earlier surviving big chamber piece, the First Piano Trio, is almost always played in a much-revised version from the end of Brahms’ life) to the very last of them, the Second Clarinet/Viola Sonata (Op. 120/2) of 1894. In addition there are small tidbits: a few Hungarian dances; three of the more harmonically astonishing late, tiny piano pieces; and the very early Scherzo Brahms contributed to a composite violin sonata for his lifelong friend the violinist Joseph Joachim.

The plum of the crop, to my mind, is the magnificent performance of the Second String Quintet (Op. 111). The team of Ani Kavafian and Philip Setzer (violins), Paul Neubauer and Yura Lee (violas), and Paul Watkins (cello) play with well-nigh-perfect ensemble balance, tone at once bright and rich, and an exuberance and joy that are irresistible. I don’t know which of the outer movements I’m more impressed with. The voicing of the first movement — the opening, with its wide-ranging cello solo fighting against a unified and busy accompaniment on top of it, is a notorious balance problem — is as well-handled as I’ve ever heard it: Watkins doesn’t sound like he’s straining, nor the others like they’re trying to go easy on him. The finale, though, is just as good, its mercurial mood-shifts all taken in stride, and the marvelous fake-out of the coda (you’re in for a treat if you haven’t heard it before) wild, reckless, and yet somehow not spinning out of control.

The plum of the crop is the magnificent performance of the Second String Quintet (Op. 111).

Nearly as good is the Op. 115 Clarinet Quintet (with David Shifrin on clarinet, and the strings the same as Op. 111 minus Neubauer). The tone of the work is quite different from that of Op. 111, being predominantly melancholy and restrained, apart from the astonishing Gypsy-style clarinet solos in the middle of the slow movement, and the strings moderate their tone accordingly.

Another standout is the two-piano version (Op. 34b) of what eventually became the Piano Quintet. The piece isn’t heard often in this form, and those who know only the final scoring might be surprised how effective it is when played as well as Alessio Bax and Lucille Chung do here.

Neubauer’s way with the clarinet or viola sonata, Op. 120/2, is maybe a bit too ruminative for my taste, yet he plays with exceeding beauty of tone, and he has a superb partner in Gilbert Kalish, whose accounts of the three little late piano pieces I mentioned above are minor miracles of color and touch.

I was less taken with the Op. 18 Sextet, whose first two movements seemed too cautious about balance. Yes, you want every line audible, and the principal strains clear, but the trick is to do that without sounding as though you’re working at it. String players (amateur and professional alike) will know this great, sprawling, rollicking tunefest as the best piece of Brahms to bash through at a chamber music reading party. Worrying too much about whether the other players are projecting enough sucks some of the fun out. The bumptious Scherzo and the Rondo finale — the latter taking a lot more detours than the title suggests — get the groove back.

On the vocal side, we have the unique Op. 91 songs with viola (Neubauer again), with mezzo Sasha Cooke and Kalish, beautifully sustained and sung; and the first set of Liebeslieder Waltzes, for vocal quartet (Erin Morley, Cooke, Paul Appleby, and Kelly Markgraf) and piano four-hands (Kalish and Wu Han, delightfully high-spirited and blended).

I should protest the absence of texts and translations from program booklets that are otherwise well-designed.

Now to all the not-Brahms. There are connections from the past (Bach, including a full-toned and often touchingly inflected Second Cello Suite from Laurence Lesser; Vivaldi, for the old “Follia” melody that is so much like the theme of the Sextet’s variations; Haydn, for a piano trio finale in Gypsy style). There are connections to the 20th century, including Ravel’s Tzigane (another virtuoso, Gypsy-inflected work); Arnold Schoenberg’s late violin-and-piano Phantasy, played with Ian Swensen’s usual justified bravado; and, rather puzzlingly, John Harbison’s 1981 Piano Quintet, whose connection to the Brahms Piano Quintet, alleged in the program notes, completely escapes me. And then there are the contemporaries: Robert and Clara Schumann, Antonin Dvořák.

Not to be missed: Schumann’s late Märchenerzählungen (Fairy tales) for clarinet, viola, and piano (Carey Bell, Lee, and Wu Han). Bell’s melting tone blends exquisitely with Lee’s, and the notoriously pesky piano part can rarely have been played with such clarity; the peculiar but fascinating texture of the first movement and the ineffably smooth, sustained lines of the third, with their undulating accompaniment, are both glorious in their different ways. Another late-Schumann rarity, the Spanische Liebeslieder, is presumably one inspiration for the Brahms Liebeslieder Waltzes, being scored also for vocal quartet and piano four-hands. They are tiny songs, between one and two minutes long, and utterly charming.

The recording quality is spectacular, and the audiences completely inaudible.

(I should protest, by the way, the absence of texts and translations from program booklets that are otherwise well-designed. The vocal numbers already mentioned, plus the isolated Schubert and Schumann songs that appear here, deserve to be understood.)

Clara Schumann’s Mendelssohnian Piano Trio, much her biggest piece of chamber music, is yet another rarity, performed with clarity and passion by pianist Juho Pohjonen, Lee (on violin this time, and very well, too), and cellist Eric Kim. And there are many smaller pieces, vocal and instrumental … but you get the idea. Like every [email protected] set I’ve heard, this is a treasure trove. I should add that the recording quality is spectacular, and the audiences completely inaudible.