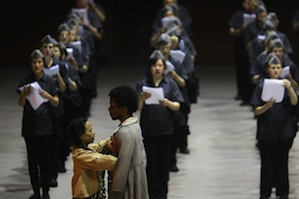 My Friday evening began when I was ushered through the doors of Kezar Pavilion — that’s right, the basketball stadium at the eastern edge of San Francisco’s Golden Gate Park — by volunteers wearing militaristic uniforms. I was there to see the first of four performances of the West Coast premiere of David Lang’s massive, interdisciplinary work, battle hymns. Presented by the vocal ensemble Volti in conjunction with the San Francisco Choral Society, the Leah Stein Dance Company, and the Piedmont East Bay Children’s Choir, this five-movement work explores our relationship with war and features texts dating from the Civil War. These texts include a snippet of President Lincoln’s words, a manipulated version of Sullivan Ballou’s letter to his wife, and three distorted Stephen Foster song lyrics.

To put it bluntly, this was an incredibly difficult work to produce. Paradoxically, what made this performance successful were also the aspects that made it so challenging to experience as an audience member — primarily, the ways in which the director and the choreographer negotiated the space itself (Stein’s forte), the use of dance, and, of course, Lang’s score.

Because the space was so enormous, I was interested to see how conductor Robert Geary would accommodate the 40 to 60 yards between himself and the choir. His movements were reminiscent of a marching band director — exaggerated and large — with most of his focus on a clear beat pattern, which was augmented through his use of a flashlight as a baton. Despite Geary’s efforts, though, the choir seemed out of rhythm and hesitant about their pitches at times.

However, the large space was also a huge detriment to the work. The music became washed out and the texture and structure of Lang’s score was lost. Additionally, the space swallowed up almost all of the text, and any significant lines quickly evaporated.

Throughout the performance, the choir changed formations and locations, using the entire court. Indeed, a new arrangement of the singers in space was often a better indicator that a new movement had begun than the music itself. The chorus began in strict military lines as a corps, and, by the end of the work, during Lang’s hauntingly cockeyed use of Stephen Foster’s iconic Beautiful Dreamer lyrics, the singers had moved into a jumbled mass of broken souls.

Lang’s music pushed forward insistently, often with waterfalls of sound pouring from the lowest voices and moving through the sopranos.

Perhaps the most theatrical use of space occurred at the start of the program. Overhead, the florescent lights flared into existence and a hush spread quickly over the audience. As those lights flickered on, I felt transported from a basketball stadium to a stark barrack. Suddenly, children popped up from their hiding places in the bleachers all over the room like young soldiers rising from the dead. Their clear, high voices echoed as they individually sang out “I’ll be a soldier!” Ghostly does not even begin to describe this experience.

Although I enjoy watching modern dance, I certainly don’t count myself as an aficionado. Thus, while some of Leah Stein’s choreography was difficult for me to follow and didn’t seem to correlate in any obvious way to the text or the theme of war, the vast majority of the dancing was incredibly poignant and unbelievably sad.

The most striking moments occurred in the first movement, titled “a father’s love,” in which the dancers ran through the singers, who were standing in lines as a military corps, and threw up their hands and bodies above the heads of the musicians only to slowly collapse back into the mass of gray uniforms, like so many soldiers mowed down in the trenches.

I don’t believe that many groups could successfully navigate a piece of this magnitude and complexity. Bravo!

Still, the dancing had its drawbacks. It distracted from the music and left me wondering whether Lang’s score could stand on its own, like Tchaikovsky’s ballet scores, or whether the music in this work is purposely linked to the dance, unable to exist on its own.

Throughout the dancing and the movement of the choir, Lang’s music pushed forward insistently, often with waterfalls of sound pouring from the lowest voices and moving through the sopranos. Occasionally, the words functioned less as words and more as percussion. In Lang’s continuous stream of sound, the consonants acted like the splat of rain on a windowpane, creating a pleasant rhythmic pattern.

Conversely, the relentlessness of Lang’s writing, while manageable with dance incorporated, would have been excruciatingly minimalistic without it. Additionally, the soprano lines ventured into extreme altitudes that this choir was not able to traverse successfully. Indeed, in those moments, the sopranos sounded uncomfortable and out of tune.

Although there were times when I glanced at my watch and thought that battle hymns might be a little too avant-garde for my taste, they were overshadowed by periods of intense sadness and horror in which I was immediately drawn back into the performance. I even noticed goose bumps frequently rippling up my arms and washing over my neck. For a work this challenging, I give Volti and their collaborators a hearty congratulations. I don’t believe that many groups could successfully navigate a piece of this magnitude and complexity. Bravo!