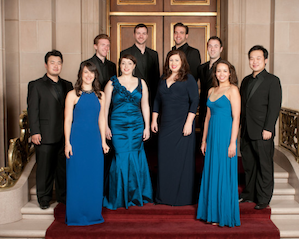 Of the singers who graced the stage — it’s impossible to evaluate the Apprentice Coaches, Robert Mollicone and Sun Ha Yoon — two outgoing Adlers, tenor Brian Jagde (Cavaradossi in our current Tosca) and soprano Nadine Sierra (Papagena in the recent Magic Flute) joined continuing Adler Fellow, bass-baritone Joo Won Kang (most recently Marullo in Rigoletto) in projecting major star potential. Barring the intervention of “fate,” with all the Verdian implications thereof, Sierra and Jagde certainly have gold stars awaiting them on dressing rooms doors, and Kang, who continues his Adler Fellowship in 2013, seems in line for another.

Winner of the 2009 Metropolitan Opera National Council Auditions, where she shared the prize with La Fenice’s latest star, soprano Leah Crocetto, the beautiful Sierra thrilled the full house of Merola supporters and opera lovers with Juliette’s “Dieu! Quel frisson…Amour ranime mon courage” from Gounod’s Roméo et Juliette. Not only were her high notes glorious; her entire range was strongly projected, dramatic to the core, and filled with feeling. Sierra does not simply assume a pose or pretend to act; every vocal and facial expression, every move of her lithe body proclaims total involvement. Her sensational final high note, which seemed to go on forever, telegraphed triumph after triumph in the years ahead.

To Kang came the challenge of following Sierra’s sensational showing. Rather than attempting to knock us out with another powerhouse portrayal, he pulled out the mandolin (played by SFO Orchestra’s Craig Reiss) to offer an aria of suave seduction, Don Giovanni’s “Deh vieni alla finestra.” The voice was warm and handsome, the legato perfect, and the beginning of the second verse soft and meltingly seductive. If I hadn’t known that the Don was a murderer, rapist, and sex-hungry seducer of the first order, I might have asked the not-so-innocent Zerlina to please stick to her dumb Masetto and leave the Don for me.

But that was only Kang’s first appearance. In a remarkable show of versatility for a First Year Adler Fellow, Kang returned with departing Adler baritone Ryan Kuster to deliver one of the highlights of the evening, the rarely programmed “Alfin questo Corsaro è mio prigione … Cento leggiadre vergini … S’avvincina io tuo momento” from Verdi’s Il Corsaro. This time, his voice was considerably darker, with a largesse of volume and expression that screamed Verdi baritone in the making. When one of Verdi’s catchy melodies made its appearance in the cabaletta, Kang bit into it fully, hurling out gloriously colored notes that filled the theater.

Sierra returned as well, this time with Jagde, to deliver a gorgeous duet from Massenet’s Manon. Although Jagde omitted the announced “Je suis seul … Ah! fuyez, douce image,” undoubtedly because he was saving his voice for his wonderful main stage Tosca, he matched Sierra in exceptional strength and beauty of tone. Sierra continued to impress with the finest control of dynamics and shading of anyone onstage, bending, swelling, and then paring down notes as would a first rank artist. The couple’s final love embrace was so believable, and so long, as to send many a gossip columnist scurrying to their Twitter feeds.

Jagde also made a fine, if less than exceptional showing in “Forse la soglia attinse … Ma se m’è forza perderti” from Verdi’s Un Ballo in Maschera. That he, too, has Verdi in his voice is beyond question. Perhaps his extra eagerness was meant to compensate for vocal fatigue. Here’s hoping he paces himself in future stage roles, and doesn’t sing himself out too soon.

Kuster, whom Opera Now critic Karyl Charna Lynn reports as having sung a “memorably debauched, sexy Don Giovanni” at Wolf Trap, was on this night challenged at the top of his range, but otherwise produced beautiful tone. First year Adler mezzos Laura Krumm and Renée Rapier, who return in 2013, both displayed considerable fetching sound in their middle ranges. Krumm’s poise and beauty assure that she can hold the stage, and Rapier’s exceptional strength and solidity as Octavian in the concert’s close, the final trio from Der Rosenkavalier, more than held its own opposite Sierra’s high C soaring Sophie. (If only Finzi knew how to conduct Strauss, and could have made magic of instrumental combinations that were instead reduced to sound effects). Rapier displayed equal core strength and many expressive touches in her “Parto, ma tu ben mio” tour de force from Mozart’s La Clemenza di Tito, and dueted perfectly with Jose Gonzalez Granero’s clarinet.

First year soprano Marina Harris, returning in 2013, was not always secure on top or as an actress, but her beautiful inward sweetness in Tatiana’s big aria from Tchaikovsky’s Eugene Onegin, “Puskai pagibnuya,” showed tremendous promise. Baritone Ao Li sang handsomely with Krumm in “Légères hirondelles,” but delivered a surprisingly lightweight Guglielmo in “Rivolgete a lui lo sguardo” from Mozart’s Cosi fan tutte. Nonetheless, he was so delightful — in point of fact, hilarious — and has already sung so wonderfully on the main stage, that it’s safe to say that this returning Adler is one of many with fine careers ahead of them.