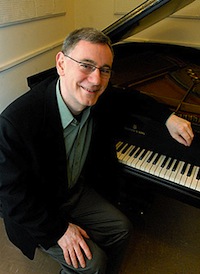 Davitt Moroney has done it again. He brought a repeat performance of Alessandro Striggio’s Mass sopra Ecco sì beato giorno to the First Congregational Church of Berkeley. Written in Mantua in the 16th century, the Mass made its American premiere in 2008. For Friday’s performance, four of the Bay Area’s best early-music choruses participated: Magnificat, American Bach Soloists, Schola Cantorum San Francisco, and the Chalice Consort. A large audience, including many people who had heard the Mass previously, enjoyed in addition the first modern performances of two large 16th-century choral compositions by other composers, reconstructed by Moroney.

For the mass, five choirs occupied the stage in a semicircle, distinguished from each other by alternating white and black dress. Stage center held a continuo ensemble of nine players, and ranged along the back wall were His Majestys Sagbutts and Cornetts. UC Berkeley faculty and students were included in the continuo and in the final Agnus Dei.

Striggio’s motet Ecce beatam lucem was performed as an introduction to the Mass, which was based on the motet. The composer, as shown in a reproduction in the printed program of two pages of the Agnus Dei, distributed the vocal and instrumental forces wonderfully, with assistance from Moroney’s scholarly work. Big climaxes were reinforced by entrances of His Majestys brasses, and the continuo accompaniments provided a variety of timbres. Vocal variety ranged from occasional solos through small ensembles all the way to 60 voices, which brought the Mass to a stunning end.

Moroney began the concert by playing an organ intonation by Girolamo Cavezzini, followed by Stefano Rossetto’s Christmas motet Consolamini, consolamini popule meus (Comfort ye, my people). Some phrases were set for 50 voices, with the addition of the brasses; others were for smaller groupings, accompanied by continuo only. Missing parts were written by Rossetto’s 21st-century colleague Davitt Moroney, who had restored and prepared the motet for its “first modern performance.” Just before intermission, the Rossetto motet was repeated, for the “second modern performance.”

In between, pieces by Giovanni Gabrielli and Tiburtio Massaino were played by His Majestys players, with Moroney and James Apgar on organ. An anonymous canon in 40 parts was sung: Unum cole deum. Moroney had restored it, and found it to be a choral piece, its title and an ensuing phrase being the first two of the Ten Commandments (Love only one God; do not take his name in vain). All ten commandments were sung at once, passed around in canon, creating a kind of Renaissance minimalism.

In the Congregational Church’s reverberant acoustics, as the choral sound built up and enveloped the audience, a static clamor was created in sensitive eardrums. I found myself wishing for a larger cathedral. Yet most people loved being bowled over by the sound. An ovation resulted in an encore performance of the 60-voice Agnus Dei. Bouquets were distributed to Moroney and to soloist Lauren Heimes, and a single large rose was presented to Wim Becu, player of everybody’s favorite instrument, the immense great bass sackbutt.

The human larynx is an authentic copy of a 16th-century larynx, and has never gone out of fashion.

Moroney’s extensive program notes described how music was used in diplomacy among the top 1 percent of 16th-century European society, and included an account of his discovery of the Striggio Mass that reads like a good mystery novel.

During the intermission, I heard someone ask, “Why do 21st-century audiences go to hear 16th-century music?” One reason is that choruses, both professional and amateur, keep on singing and loving Renaissance and Baroque music. Instrumentalists have been catching up with the early-music movement, playing original instruments or copies thereof, but the human larynx is an authentic copy of a 16th-century larynx, and has never gone out of fashion.