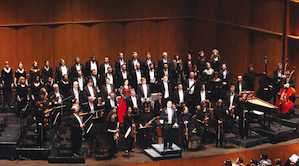 Someone once naively asked the composer Milton Babbitt, relatively early in his career, who his favorite composer was. His immediate answer, “He hasn’t been born yet,” puzzled me until I heard Heinrich Biber’s Missa Salisburgensis, which has been miraculously revived by the American Bach Soloists, conducted by its director, Jeffrey Thomas, in Saturday’s sold-out concert at the San Francisco Conservatory.

This was the local premiere. (See a video of Missa Salisburgensis in rehearsal.) Until recently, the score seemed to be composed by the prolific “Anon.” Biber, like J.S. Bach, wrote music for specific occasions — in this case, the 1100th year of the founding of the Salzburg archdiocese as well as the rebuilding of Salzburg Cathedral, where the young Mozart probably heard his first church music. Future performances were not a consideration. Rebuilding the cathedral after its damage by fire took a mere 10 years, the music probably 10 weeks, but today it still sounds alive.

As the work had been composed three years before he was born, Bach certainly had never heard Biber’s Mass, but if he had, he would have been amazed to note how much of his own work it prophesied. Lest we doubt the abilities of this little-known composer, it is a work of consummate contrapuntal craft. The individual parts — 53, to be exact — are arranged in discrete ensembles, including two separate trumpet choirs (four each placed above the stage) as well as seven vocal ensembles, all originally meant to be heard spatially in the newly completed Salzburg Cathedral. Even today, this music requires more than a good choir, and further necessitates soloists capable of singing or playing alone, and of coming in without cue. (I don’t know how they managed in the days before conductors and closed-circuit TV.)

Hearing this work resurrected, as it were, even in a relatively confined space, I felt it was natural to travel back in time for this once-in-a-lifetime experience. I could easily imagine the good burghers of Salzburg feeling that they were already in heaven, when they heard the grand opening “Kyrie” coming from all sides of the cathedral, which must have seemed more vivid than even the finest surround-sound system does to technologically advanced listeners today.

Lest we doubt the abilities of this little-known composer, it is a work of consummate contrapuntal craft.

Pairs of instruments and voices interweave in intricate patterns throughout. In the Gloria and Credo movements, the music seemed to pass naturally from one group to another. It reminded me of the sensation I had when first hearing Elliott Carter’s Symphony of Three Orchestras here in San Francisco some years back, which was music of the utmost complexity but music that gave me the feeling of great space and, yes, even of simplicity. Thanks to the capable hands (and ears) of director/conductor Jeffery Thomas in Saturday’s performance, there were no traffic jams that I noticed. True, singers all faced each other, rather than forward, which compromised the sound somewhat (at least from my seat), but surely it helped with the antiphonal effects the composer intended.

There were many wonderful examples of word painting, so beloved by Baroque composers. The lingering figure Biber assigns to the words “Domini fili unigenite” seemed the only way to express “only begotten son.” In contrast, repetition of the three-note figure for the word “descendit,” which echoed back and forth ad infinitum, made me feel more like I was on an escalator than a staircase. Even more moving was the expressive miracle Biber achieves in the setting of the words “miserere nobis.” They were heard twice, each time with painful, dissonant suspensions that must have been expressive, to listeners 300-plus years ago, of hellish suffering; for us, by contrast, in the context of so much tonic-dominant harmony, they were like stepping out of the 17th century and into the 21st. In any case, the resolution, in “just” intonation, felt merciful indeed.

There were many wonderful examples of word painting, so beloved by Baroque composers.

The program began with two short chamber works, a somber chaconne for solo violin and an exuberant sonata/quintet for trumpet, strings, and continuo; the program ended with a positively manic motet, Plaudite tympana, celebrating the good fortune of the native Salzburgers. Dynamic and expressive as the performances were, showcasing the talented violinists Robert Mealy (in the chaconne) and Elizabeth Blumenstock and trumpeter John Theissen (in the quintet), I found myself thinking, “Now how about some Bach?” After hearing the Biber, I could happily say, “Es ist genug” (that is, “This is enough”— enough, that is, to prime me to look forward to Bach’s B-minor Mass next weekend).