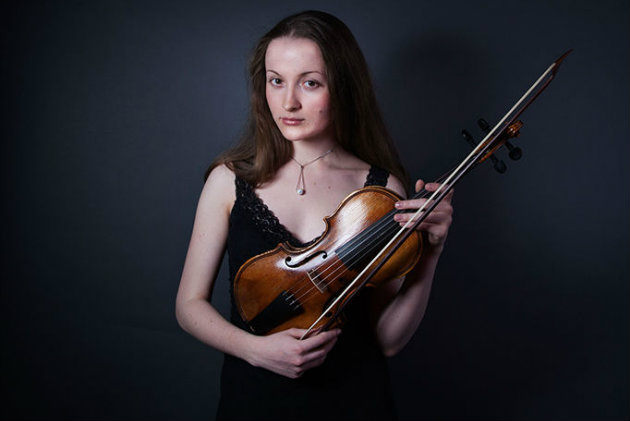 For the opening of their 27th season, American Bach Soloists hearkened back to their earliest days by re-programming two of the three Bach Cantatas from their inaugural concert, 26 years ago next week.

The two other pieces on the program, which was simply called “Bach Favorites,” both involved the 2016 recipient of the Jeffrey Thomas Award, Ukrainian-born violinist (and composer) Tatiana Chulochnikova. She played the solo part in the Concerto for Violin in E Major, BWV 1042 together with the ever-splendid ABS orchestra, but also presented her own transcription, for solo violin, of the iconic Toccata and Fugue in D Minor, BWV 565, originally written for organ. Chulochnikova received the 2016 Jeffrey Thomas Award for her “thrilling technique and bravura style,” both of which were more than apparent in her performance of the Toccata and Fugue.

Chulochnikova received the 2016 Jeffrey Thomas Award for her “thrilling technique and bravura style,” both of which were more than apparent in her performance of the Toccata and Fugue. By getting rid of the organ, the transcription removes all the classic Halloween and horror film connotations, and dropping the accompanying voices pares the composition down to its melodic core.

Chulochnikova’s finely articulated and assertive playing threw an interesting new light on the bare bones of BWV 565. By contrast, her performance of the Violin Concerto, after intermission, was more measured and deliberate, with a meditative central Adagio and a lively final movement.

The two church cantatas on the program are similarly structured, and both have arias for all four solo voices, but they express completely different sentiments. In Wachet! betet! betet! wachet!, Bach uses a Bible text from the Gospel of Matthew, about the second coming of Christ and the Last Judgment.

The emotions alternate between fear of damnation, expressed mostly by Mischa Bouvier’s silky baritone in the ungrateful role as messenger of doom, and hope of salvation, beautifully delivered by soprano Mary Wilson’s upbeat aria “Laßt der Spötter Zungen schmähen” (Let the tongues of the mockers scorn).

Tenor Derek Chester, who had a remarkable evening, was impassioned in the recitativo “Gebenedeiter Mund!” (Blessed mouth!) and playful and light in his aria “Hilf, Jesu, hilf, daß ich auch dich bekenne” (Help, Jesus, help, that I may also acknowledge you).

What stood out above all, in both cantatas, were the choruses and chorales, and the way the members of the ABS Choir performed them. Well balanced, bright, and deeply focused, the choir amazes with every note and phrase it produces.

In another throwback to the early days of the ABS, Music Director and conductor Jeffrey Thomas invited the audience members to sing along with the closing chorale of BWV 70, thus sharing with them the thrill of performing under his expert guidance.