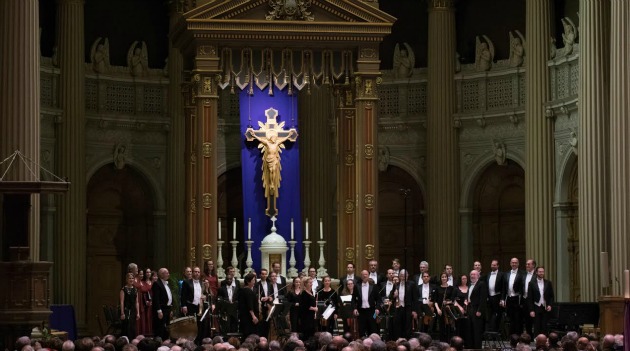 The American Bach Soloists’ magnificent performance of Bach’s Weihnachts-Oratorium (Christmas Oratorio, BWV 248) last Saturday, Dec. 12, was the ensemble’s first in almost eight years. It kicks off a season in which ABS will perform all three of Bach’s oratorios, not counting the Passions.

And, according to the opening announcement by conductor and music director Jeffrey Thomas, it was also the first time the ensemble performed in the sumptuous setting of St. Ignatius Church, a historical (1914) San Francisco landmark with a splendid interior and very generous acoustics.

Bach wrote his Christmas Oratorio for the Christmas season of 1734 and intended it to be performed on six successive days from Christmas Day to Jan. 6, the Epiphany. The tradition to perform the cycle of cantatas in one concert, as well as the name Christmas Oratorio, appeared long after Bach’s death in 1750.

Together, the six cantatas cover the Christmas story from the Nativity of Jesus through the Adoration of the Magi and include the Annunciation to the Shepherds, the Adoration of the Shepherds, the Circumcision and Naming of Jesus, plus the journey of the Magi to find Jesus and visit King Herod. Last Saturday’s performance was top-notch and completely in accordance with the solid reputation that Thomas has built over the years with ABS as one of the leading baroque ensembles in this country and beyond.

Musically speaking, last Saturday’s performance (repeated the next day at the Mondavi Center in Davis) was top-notch and completely in accordance with the solid reputation that Thomas has built over the years with ABS as one of the leading baroque ensembles in this country and beyond.

But the concert at St. Ignatius was not without issues, and many of them were related to the size and sonic qualities of the performance space. Both visually and auditorily, the musicians and singers seemed very far removed from the audience. Seated in the front half of the church, I can only imagine how distant the performance must have felt to audience members in the pews farther back.

The rich acoustic environment of St. Ignatius is a mixed blessing for a relatively small group like ABS. A lot of the crispness and detail are drowned out and the overall sound is more opaque than it would be in smaller church or a regular concert venue. On the other hand, the more stately passages of the Christmas Oratorio, especially the chorales, were beautifully phrased and superbly sung, with the ABS Choir at its usual best. Beautiful also was the fugato explosion of angelic multitudes in the chorus “Ehre sei Gott in der Höhe” (Glory to God in the highest).

The four vocal soloists (Hélène Brunet, soprano; Agnes Vojtko, alto; Kyle Stegall, tenor; and Jesse Blumberg, baritone) were outstanding, with extra kudos for Stegall in his role as Evangelist. His lively and empathetic delivery aptly reflected the changing moods and aspects of the biblical storyline. The aria “Frohe Hirten, eilt, ach eilet” (Joyful shepherds, haste, ah hasten), a joyful coloratura back-and-forth with a solo flute, was lovely, the tenor briefly stepping out of his role as Evangelist to urge the shepherds to visit the newborn Christ.

This happened right before another high point of ABS’s performance, the tender moment when Vojtko, as the voice of St. Mary, gently rocks baby Jesus to sleep in the aria “Schlafe, mein Liebster, genieße der Ruh'” (Sleep now, my dearest, enjoy now thy rest).

Much praise must, last but certainly not least, also go to the ABS orchestra and its instrumental soloists on trumpets, flutes, oboes/oboes da caccia, and violins, which formed the splendiferous beating heart of this Christmas Oratorio.