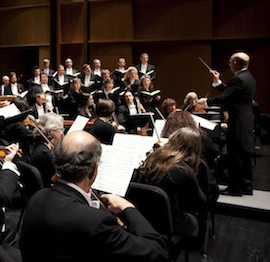 For years, there has been a tenacious rumor that classical music, if not already stiff with rigor mortis, is actively dying. Publications of all sorts, critics and musicians alike, lament the end of this music as we know it, pointing to all sorts of cultural malaise as evidence of its tragic demise. My reaction to these harbingers of doom is much like my reaction to the would-be messiahs on the streets wearing sandwich boards proclaiming “The End is Nigh” — roll eyes, continue on my way.

There are plenty of clues that classical music, while certainly financially burdened (as it has always been), is alive and well, at least in the Bay Area. My latest piece of evidence occurred on Friday evening at St. Stephen’s Episcopal Church in Belvedere at an American Bach Soloists concert.

This rightfully revered ensemble programmed a concert made up almost entirely of motets and still managed to pack the house with an ardent, excited audience. Did I mention that the entire program featured only motets?! Those esoteric, nebulous works — defined by Margaret Bent as “a piece of music in several parts with words” — that were considered historical and out-of-fashion even in Bach’s day? Yes, the very same.

There was much to applaud and celebrate. The narrowness and height of St. Stephen’s Church lent itself well to choral music; the warm sound of superbly played gut-stringed period instruments supported the singers without dominating; the richness of the countertenors bolstered the alto section in ways that only countertenors can; and to boot, the singers all looked like they were having a splendid time, which makes a huge difference for the audience.

“Ardent” does not begin to describe this audience ... they had much to applaud and celebrate. This was certainly a great performance, the audience’s reaction made it clear that ABS can claim absolutely rabid fans.

There is something about Bach’s music that remains so fresh, despite its age; clean and seemingly effortless, especially when performed by an ensemble of this caliber. Bach’s music is the citrus fruit of the music world — always refreshing with a bit of tartness to keep it from its sometimes overly saccharine brethren in the Romantic era. This was most readily apparent during Der Geist hilft unser Schwachheit auf, during which the voices became almost a flurry of polyphony.

The choruses of Aus der Tiefen rufe ich, Herr, zu dir were also a highlight with cascading melismatic passages, easily navigated by these professionals, which built upon one another as they climbed higher into the singers’ upper registers. Is it possible to feel you're growing taller with each imitative motive? The soloists, baritone Thomas Thompson, and tenor Jon Lee Keenan, while perfectly adequate and fine-voiced, never quite conquered their brutally long and rather dry arias — more commanding voices would have lent these passages much needed strength.

Mendelssohn, who was largely responsible for the revival of Bach’s music in the mid-19th century was featured twice during the concert. Both his Sechs Sprüche zum Kirchenjahr and Verleih uns Frieden gnädiglich highlighted the composer’s lyricism and his conservative though captivatingly sweet harmonic language.

Surprisingly, Brahms’s Fest und Gedenksprüche was the low point on the program. His intricate and complicated polyphony seemed to dominate ABS rather than the other way around. Hesitant entrances and concerned looks heightened the anxiety.

The concert concluded with phenomenal pairings of two works by Bach and two contemporary pieces inspired by his music. A great programmatic choice — juxtaposing pieces with the same text allows each work to illuminate the other. While composer Sven-David Sandström’s Komm, Jesu, Komm occasionally paralleled Bach’s piece by the same name, Sandström’s treatment of harmony and rhythm was completely his own. The highly dissonant chords formed, at times, a forceful wall of sound that felt almost as if the singers’ voices were pushing you backwards against the wall of the church. At other points, Sandström highlighted the percussive word “komm” with rapid iterations that began to sound almost like the splat of raindrops.

Knut Nystedt responded to Bach’s chorale setting of Komm, süsser Tod, komm selge Ruh’ with an other-worldly treatment of the first three phrases of the chorale. In his rendition, Nystedt asks five groups of singers to sing the first three phrases of Bach’s chorale setting using different timing — for instance, one choir might sing a note for six seconds, while another might hold it only for two. The result is an incredible suspension with harmonies coming into and going out of focus. In his program notes, Thomas accurately describes a feeling of timelessness during this piece. Nystedt’s technique allows the audience to truly revel in the beauty of the final chord as it slowly materializes from the mirage of shimmering dissonances.

Leaving the church, several audience members were hugging each other. This is clearly a close-knit community who is absolutely mad about American Bach Soloists. If you are feeling sad about the state of classical music or are starting to believe the rumors about its impending death, attend an ABS concert: Tt will lift your spirits and restore your faith, in music anyway.