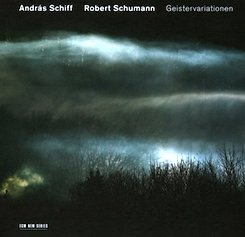 András Schiff’s new double-disc album of Robert Schumann’s works, issued by ECM Records, is titled Geistervariationen (Ghost variations). It encompasses a range of compositions, from Schumann’s youthful Papillons, Op. 2, to the last piece the composer wrote, a set of five variations on an original theme, known now as “Ghost Variations.”

In February 1854, Schumann, on the brink of the madness that was about to consume him, thought he was surrounded by ghosts who dictated music to him. It was exactly at that time that he hallucinated a serene, choralelike, E-flat major melody, which, as he told his wife, was sung to him by the angels. A few days later, he began writing variations on this melody. The composition process was interrupted by Schumann’s attempt to commit suicide by throwing himself into the Rhine River. He was rescued, brought home, and completed the variations. Soon afterward, however, his mental condition further deteriorated. He was hospitalized and spent the last two years of his life in a sanatorium.

Brahms included the E-flat major theme in Schumann’s Collected Works Edition in 1893, but refrained from printing the five variations along with it. The variations were published for the first time only in 1939. They are rarely performed — and even less frequently recorded. It is therefore a treat to hear the Geistervariationen in this recording; moreover, the piece is given additional prominence by lending its name to the entire project.

Another rarity on the disc set is a different version of the finale of the C-major Fantasie, Op. 17. Written during Schumann’s forced separation from Clara, the first movement of the Fantasie contains a conspicuous quote from Beethoven’s song cycle To the Distant Beloved: “Accept these songs that I sang to you, my beloved.” Schiff found out that a Budapest library had a manuscript of the Fantasie in which the same quote reappeared at the end of the finale. For whatever reason, Schumann later deleted the iteration of the quote from the finale, even though the Distant Beloved quote at the conclusion of the Fantasie made perfect sense, in my opinion, both structurally and expressively. (Schiff recorded the common version of the finale separately, as an appendix, at the end of the second CD.)

It is gratifying to hear these two unusual items on a Schumann CD. But, regrettably, that is where the unusual ends and the common begins. Schumann’s music interweaves extremes of anxiety, exaltation, and impulsive volatility, with abrupt moments of blissful tranquility. To be sure, one may argue that this particular view of Schumann’s musical style is rather one-sided, and it is quite possible to interpret Schumann in a more levelheaded way, carried out in metrical and dynamic moderation. The problem with the latter approach, though, is that his music is replete with two- and four-bar phrases, with numerous literal or sequential repetitions. If played in an even-tempered, well-balanced manner, his music becomes wearingly repetitive.

That is why I find Schiff’s new recording underwhelming. He succeeds on several levels, but falls short on others. He is, of course, a superbly skilled pianist who offers a solid performance marked by thoughtful deliberations and intelligent projection of inner voices. The pianist, however, shuns Schumann’s inner discord and anything that may have the appearance of exaggeration or distortion. The result is perfectly respectable, just not exciting.

The album contains three suites of character pieces: Papillons, Op. 2; Kinderszenen, Op. 15; and Waldszenen, Op. 82. The Papillons (Butterflies) is the very first suite Schumann wrote. It’s a set of dance vignettes, glimpses from a masked ball. The Kinderszenen, the charming Scenes From Childhood, is the first significant musical composition that focuses solely on the subject of childhood (it also includes Schumann’s most famous piece, “Träumerei”). Finally, the Waldszenen (Forest scenes) is a series of poetic sketches, blending tranquil landscapes with darkly mysterious scenes and drinking revelry.

In all three suites, the range of moods, which shift impulsively from unsettledness to exuberance to gentle affection, is startling. Schiff captures the clarity and contrapuntal nature of Schumann’s writing. The lyricism of expression is also tangible, if aloof. Yet the fervor is lacking; the accents are subdued instead of sharply jarring, the tempos are steady, and the pianist (and, consequently, the listener) never hyperventilates.

The score of the F-sharp minor Sonata, Op. 11, is peppered with markings passionato, animato, passionato sempre, and con passione. As in the suites, Schiff succeeds in lyrical places; the slow movement is particularly lovely. But the Sonata as a whole sounds rather Schubertian. Placid crescendos, restrained nuances, and well-mannered accents contribute, to a great extent, to this low-octane reading.

The other large piece in the album, Fantasie Op. 17, fares much better, especially the two outer movements. Here Schiff’s delivery is sincere, poetic, and intense. The middle movement, however, is too tame. In the best performances of the Fantasie, the frantic, hellishly difficult coda leaves both the pianist and the listener gasping. For some reason, Schiff plays the coda at approximately half the speed (and ferocity). I don’t believe he chose such a comfortable pace because he was incapable of managing the madcap leaps of the coda in a faster tempo. Schiff’s technical prowess is well known. More probably, his overall performance philosophy, which avoids uncontrolled agitation and heightened emotionality, prevails here again.

The title work of the album, Geistervarationen, is a startling piece of music, probably the saddest major-mode composition ever written. Schiff’s account is pleasant though devoid of emotional gravity. To those who want to hear the essence of this rarity, I suggest listening to Grigory Sokolov’s rendition. For the entire duration of the piece the dynamic level never rises above mezzo piano. Yet, these 11 minutes of music are extraordinarily gripping and heartrending, with eerie voices whispering relentlessly from every direction. I wish Schiff had showed more interest in the frenzied world of the composer’s delirious fantasies. Schumann’s music certainly deserves it.