There is something in Kenneithia Mitchell's voice that goes straight to the heart. Her debut this weekend in the title role of a sensational West Bay Opera Madama Butterfly impressed with a singularly mellow voice, effortless, brilliant phrasing. She disappears in the role, serves the music and drama, no ego showing or heard in the voice — a true artist, not a star-wannabe. 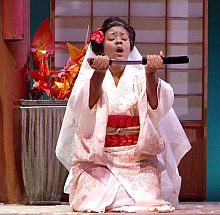 Mitchell's Cio-Cio-San was the precious jewel in the crown of a small company which keeps coming up with big hits on an annual budget that wouldn't cover half of a single production elsewhere.

Even against the likelihood of a completely sold-out house by now, I highly recommend catching one of the final two performances, on May 30 and 31.

On the tiny (25-foot-wide, 26-foot-deep, 13-foot-tall) stage of the Lucie Stern Theatre, with an orchestra of two dozen or fewer players, José Luis Moscovich’s Palo Alto company has given us first-class productions of no less than The Flying Dutchman , Cav/Pag, Macbeth, Manon Lescaut, and many more; to my regret, I missed Orfeo ed Euridice earlier this year.

Somehow this Butterfly, an opera so well-known that it’s transparent to most of the audience, has topped them all with a comprehensively, consistently solid production from conductor Sara Jobin, stage director David F. Ostwald, set designer Peter Crompton, and costume designer Callie Floor. Add to their efforts the contributions of a uniformly good cast, an orchestra playing its collective heart out, and an unusually fine minichorus.

Mathew Edwardsen is the Pinkerton, using a smallish voice to its best advantage; he sings effortlessly. Kindra Scharich, the Suzuki, is going the other way, by keeping her big voice down sufficiently and giving a wonderfully committed dramatic performance. David Cox’s Sharpless is among the finest musical-dramatic portrayals of the role I have seen. David Heilman’s Goro and Carlos Aguilar’s Bonze fit right into a great ensemble.

As with Mitchell’s performance (notwithstanding the occasional slack diction, a bit of acidity was noted in the voice between middle and high notes), the entire production had more than the sum of its parts, gifting the audience with that undefinable atmosphere of something being done right, pulling the listener into the glorious pathos of the work and bypassing distractions from his critical faculty. (One exception was the men’s wigs; tsk, tsk.) 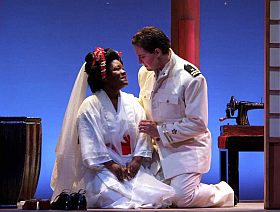 Jobin is responsible for the musical “rightness” of the performance. Still at the beginning of her career — though being, famously, the first woman conductor in the San Francisco Opera House — she has engagements galore coming up. Just as in Donald Runnicles’ Butterfly in San Francisco a few years back, Jobin’s Puccini is straightforward (that is, not gushing), yet passionate and sweeping and never out of control. Both conductors have caused copious, occasionally loud weeping in the audience, which is the proper response to Butterfly.

Stage director Ostwald’s work should be used in opera-director schools as a shining example of serving an opera, instead of showing off how clever and “contemporary” the director can be. West Bay’s is a traditional, yet imaginative and compelling, production; it is fluent and believable. Even the final scene, with an unusually large number of characters mourning Cio-Cio-San, seems “right,” though it diverts somewhat from established editions.

Thank goodness that none of Ostwald’s program notes (about the collective guilt of conquerors, from the Egyptians to contemporary Sudan) were realized in the production itself. Giacomo Puccini and David Belasco don’t need amplification of their anti-imperialism, which is already clear from their music and story.

Crompton’s “traditional but relevant” set and Floor’s opulent costumes would do credit to a bigger, more affluent opera house. I am not overemphasizing the business end of the story, in view of Moscovich’s own entertaining and effective precurtain plea for support. He had (true story) requested a $7 million grant from the American Recovery and Reinvestment Act for the country’s small opera companies, and he tells the story, repeating the rationale he used in the application:

In lean times, people cut back on frivolous expenses. But opera is anything but that. It isn’t just entertainment. You come to West Bay Opera to be moved, uplifted, healed. How much is that worth to you?

Indeed. Appealing for support is easy. WBO and this Madama Butterfly earn the right to support.