In a more perfect world, today's Presidential Inauguration would take place in balmy San Francisco, the event concluding with Dona Nobis Pacem (Give us peace), from J.S. Bach's Mass in B Minor. This majestic and heartrending expression of yearning for peace and the good of all humanity would be performed, in my fantasy concert, by the American Bach Soloists, under the direction of Jeffrey Thomas. 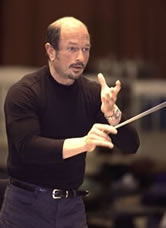 In the event, a glorious performance of the Mass took place Sunday evening at St. Mark's Lutheran Church in San Francisco before a full house of perhaps 400, rather than being attended by a live audience of two million, being watched worldwide by a billion people. An opportunity missed, alas.

I've been attending ABS concerts since the formation of the group 20 years ago, and have heard their previous Mass in B Minor performances. In many ways, Sunday's performance not only was their best, it also counts among the most rapturous and uplifting experiences of this titanic work I have heard anywhere.
Small Orchestra, Small Chorus, Big Performance
Thomas presided over a brilliant ensemble of two dozen musicians (truly "soloists," as it says in the name of the organization) and a like number of singers of the American Bach Choir, in a joyful, thrilling performance. The Mass represents a compendium of Bach's work over more than three decades (1714-1749); ABS took two decades of its own to come to this flowering and apogee. 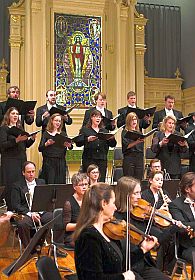 To succeed like this in a performance of the Bach Mass is something extra special, for this is both august and intimate music, alternatively heaven-storming and coming from the deepest reaches of the human heart. There can be no coasting or routine during the Mass' two-hour length, and in the ABS treatment, there wasn't any. Within seconds of the opening Kyrie, the sopranos raised their voices on high, sending shivers down this listener's spine.

The other kind of peak experience was less spectacular, but deeper and more complex. Qui Tollis Peccata Mundi (Who takes away the sins of the world) — with its four-part chorus, flutes (the wonderful Sandra Miller and Janet See), and continuo — was all of one piece, the chorus singing with one voice, conveying a feeling of time being suspended. A similar sense of timeless beauty came in Agnus Dei (Lamb of God), with alto Judith Malafronte's hushed performance being accompanied by soulful violins (Katherine Kyme, leader).

Another soloist of note was Joshua Copeland, a high baritone who sang the bass arias. His clear, strong, effortless performance made Quoniam Tu Solus Sanctus (You alone are holy) and, especially, Et in Spiritum Sanctum (And in the Holy Ghost) memorable. In the latter, he had the affecting support of Debra Nagy and Stephen Bard on oboes d'amore.

No raves for the other solo singers. Although they strongly contributed to the chorus' work, as soloists, two sopranos and a tenor delivered only something in the range of adequate to less than that. This was a surprise and a disappointment, especially against the consistent excellence, great diction, and fabulous phrasing of the chorus as a whole.
Nothing but Praise for Orchestra, Chorus
Among the instrumentalists, there were no such exceptions — only uniform excellence, with such outstanding turns as Scott Wevers' heroic performance on the corno da caccia, a devilishly difficult "hunting horn," and Steven Lehning's violone.

Jeffrey Thomas completely owns the Mass, directing it (as it were) from the inside, bringing out from each part what is unique to it and yet linking the music all together, the way it must be. This was even more true of the first part (Missa) than of the Credo, whose nine parts are traditionally closely related. Part of Thomas' "inside track" is his previous career as a world-renowned Baroque tenor (one of San Francisco Opera's earliest Adler Fellows). He is still singing Bach, but now through the marvelous forces of the ABS orchestra and chorus.