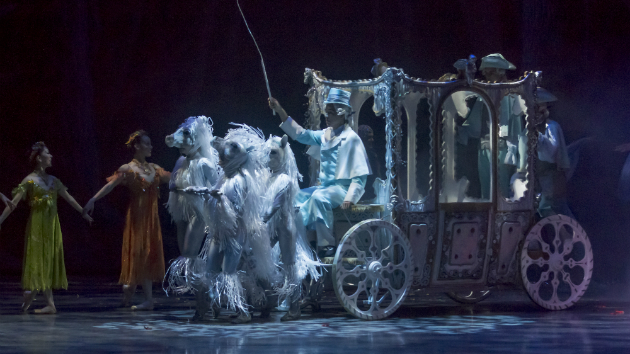 The candy box sprang open over the weekend and out popped a lovely ballerina; a handsome prince in white; two wacko stepsisters; a blithe and bustling fairy godmother, complete with (ex-pumpkin) coach and four horses; and a retinue of courtiers in bright, pink satin. The audience at Ballet San Jose — not a few of them mothers with little girls in their best party clothes — gobbled it up. If they were full, so was the San Jose Center for the Performing Arts, and the ticket sales must have helped the struggling company considerably.

But this Cinderella, choreographed by Ben Stevenson in 1970 (Ballet San Jose first danced it in 2012), is actually a pretty dietetic affair. It’s stuffed with pageantry, but there aren’t really very many dances.  That leaves a fine cast like the one Ballet San Jose fielded Saturday night all dressed up with few places to go.

Cinderella’s cottage is a dull room indeed (and the lighting too dim). There is plenteous posing and sweetness from Cinderella (Ommi Pipit-Suksun), who is constantly picked on by her stepsisters (Kendall Teague and Akira Takahashi, men en travesti) and even slugged by her stepmother (Karen Gabay).

There’s a great bit of stage magic – darkness, then a pop and a big flash — when the old crone (Brittany Woo) becomes the Fairy Godmother (Amy Marie Briones). Briones picks up the overall pace considerably, almost by main force. She is slightly larger than life, with a tall crown to boot, and she’s dazzling in an Auntie Mame way, leaping, turning, and gesturing. She brings out four fairies, corresponding to the seasons, and each gets a little variation, with Nicole Larson’s Spring Fairy twinkling the best.

Waving her wand, the fairy godmother creates a coach and four horses, from a pumpkin and a handful of dead mice. She’s aided by a nicely leaping quartet of male dragonflies. And away goes Cinderella, rags transformed into a lovely pink tutu and a diaphanous cape, plus sparkly slippers (we’ll be hearing about those later).

You know the story. We finally meet Prince  Charming  (Nathan Chaney) in Act II. But first, we meet a Jester (Josue Justiz). Here we have yet another problem, not all bad. Justiz, you see, is a phenom, a defector from the Cuban Ballet who joined the company last year. He is a wonderful pyrotechnician, and he has a role made for one. He’s charming, sweet, spins on a dime, jumps to mighty heights, and is oh so helpful to Mr. Charming, who, despite his handsome conformation, comes across as something of a stick. A smitten stick, to be sure, when he meets Cinderella, but it’s hard not to wish that she’d just run away with the Jester. But Cinderella and Prince Charming, a great-looking couple, are bound in a decorous pas de deux, with pretty spins, lifts, and turns — nothing that will set hearts on fire, though.

The ensemble of corps dancers does a pleasant enough waltz in trio formation, and their red costumes look beautiful. Then the clock strikes 12, the slipper slips, and away we go. In Act III, the lack of choreography is momentarily eased by the arrival of the adorable children from Ballet San Jose School, as ring bearers and, mysteriously, orange bearers, and angels with little blond wigs and gauzy wings. All quite priceless. But once the wedding has taken place, there’s not much to do but stand in orderly ranks as the audience applauds warmly. Perhaps you, too, have been to weddings like that. It can happen. But onstage? It seems like a waste of time.

Compared with San Francisco Ballet’s performance of Romeo and Juliet last week, it’s painful to note that Sergei Prokofiev’s Cinderella score is generally even glummer than that one (he had  good reasons; he was terribly depressed by his persecution in the post-World War II Soviet Union).  However, Christopher Wheeldon’s Cinderella, an S.F. Ballet smash in 2013, stands as proof that it is possible to make a dynamic, balletic feast out of the score.

A pity. But there are hopefully kids who saw the show last weekend and fell in love with the ballet’s flashes of charm, costume trappings, or the general quality of what little dancing takes place, and who will seek out more opportunities to watch ballet and perhaps even to try it.

As for future programming, there’s a lot to be said for quality ballets that challenge the dancers to step up. The audience, it’s been proven time and again, will follow.