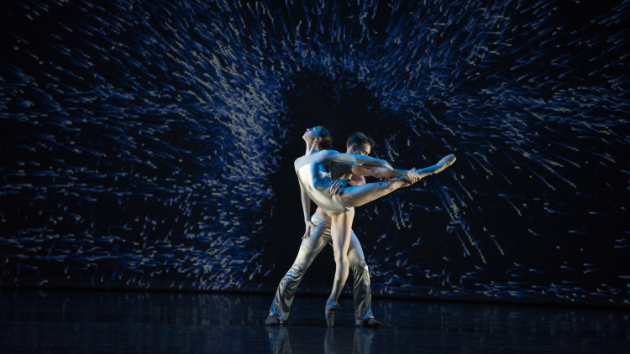 Ballet San Jose, having weathered its latest financial emergency, celebrated last weekend with the next scheduled offering of its 2014-2015 season, a trio of imaginative pieces titled Bodies of Technology, and announced its new name: Ballet San Jose Silicon Valley. Nothing could have been more appropriate; the show, at San Jose’s gorgeous old California Theater, embraced what the valley is famous for as the heart — at least in its own mind — of the zeitgeist. The company aims to fuse that newness and its pioneers with what its chief executive, Alan Heinlein, called “the most human” of art forms, bringing it to the people.

Not three blocks away from the half-full theater, another form of entertainment with men in tights, “Wrestlemania,” was packing them in at the San Jose Convention Center. Having swiftly raised more than a half-million dollars from concerned balletgoers as well as corporations, Ballet Silicon Valley still has its work cut out for it.

Will focusing on technology do the trick? Well, if dance is most human, it makes sense to focus on humanity’s preoccupations. How engagingly that focus is applied is what matters, and as with any other show, the three works varied in quality.

Luckily, however, Ballet San Jose Silicon Valley (after years of grappling with the moniker “San Jose Cleveland Ballet,” are we back at square one?) continues to move up the artistic ladder. The dancers, under the artistic direction of Jose Manuel Carreno, amply, even extraordinarily, justify the community’s faith, as the hundreds of donors, thanked from the stage, attest.

Of the three ballets (two world premieres), the oldie, Jessica Lang’s 2013 Eighty One, succeeded best. It was the most coherently developed and the most emotionally evocative, seamlessly integrating music and dance. Its composer, Jakob Ciupinski (born in 1981), calls it Gesture/Control Music — the instruments consisted of two electronic theramins and a laptop. Ciupinski played on an elevated platform, lit by Jim French and surrounded by traces of fog, activating the theramins’ movement sensors with magisterial gestures that made him seem like a beneficent overlord.  This is electronic wizardry in the best sense of the word.

Choreographer Amy Seiwert’s This Might Be True had a lot of wonderful movement ideas going for it, but the ideas proved to be sketches that didn’t coalesce into a totality. With music by Nils Frahm and Anne Muller, the 10 dancers were deployed against a stunning, constantly shifting display in blues and whites (Jim French again, aided by Matthias Haertig). Lines and dots suggested trees, branches, and twinkling stars; twists evoked DNA.

This is the human side of electronica, something Seiwert is good at, with dancers conquering the requirements of jumping turns and smooth arabesques penches, the women being lifted securely, highly, and beautifully by the men. For all, there were exciting runs across the stage. And as is often the case with works like this, there was a puzzling quote to chew on, splayed across the background, then broken into its separate words; one part of it was the basis for the title. And there was a little bit of talk, as undecipherable as the dance’s overall meaning.

Yuri Zhukov’s piece, User’s Manual, on the other hand, achieved coherence but then skidded right past it, continuing for some 15 minutes beyond its maximum impact. What we got, though, from the full company was a gorgeous display of pyrotechnics, phrasing, and skill. The electronic music, performed live in front of the stage by two musicians from The Living Earth Show, included a section with the chatterings of an old IBM printer — the illustrations and text drawn from the user’s manual, recited with a British accent, simply reeking of the good old typewriter days. Older still was the automaton, a Coppelia-style doll, who opened the dance. She (Emma Francis) wore a powdered wig and white satin gown and was accompanied by a disquisition from that 18th-century take on these mechanical dolls. It let us know that new technology is nothing new.

Then scenic designer David Szlasa let us really have it, dressing the women identically with red wigs cut in a bob and little-skirted leotards. The dancers could now move alike, and think alike, and remind us of Sylvie Guillem’s signature role in In the Middle Somewhat Elevated, a William Forsythe classic of neoclassicism. Or, equally vital, they could not. The men, rendered equally identical by their white-powdered faces, moved with equal invention.

The climax showed the women as a row of identical talking heads, in windows high up on the wall, with speech distorted to Donald-Duck speed. One of them said goodnight, and there was a smattering of audience applause. That was the choreographer’s cue, and it went by the boards.  There is the germ of a terrific ballet in there, and one hopes that Zhukov will eventually pare it down to its essence.

Bodies of Technology, in all, is a thoughtful attempt to bring dance to terms with technology and to bring people who care about technology to terms with dance. The California Theater audience, roaring its approval as the curtain fell, was willing to make the effort.  To survive as it so well deserves, the company will need many more who decide to wrestle with it too.