Bang On A Can 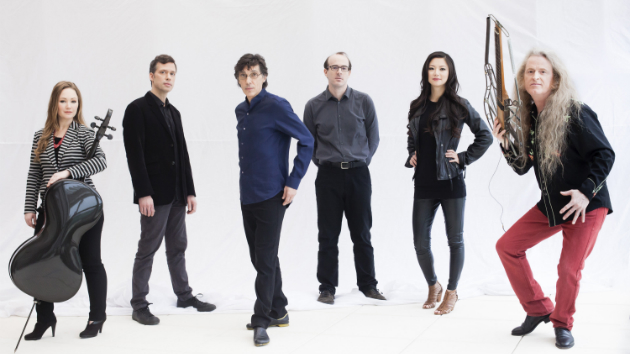 Those unfamiliar with Bang On a Can All-Stars would not have been able to tell what they were about to hear from the cornucopia of instruments strewn around the stage of Oberlin College’s Finney Chapel on February 28. A cello and bass lay on their sides, an electric guitar sat on a stand, and a playground of percussion occupied more space than your average New York studio apartment. Is the All-Stars really a “contemporary classical” (those dreaded two words) group? Is it a rock band? Will guitarist Mark Stewart ever lose his long mane of formerly red, now grey, hair? After over 20 years, these questions remain unanswered.

One certainty: Bang on a Can All-Stars is a group of musicians with an electrifying stage presence.  They have a self-possessed but rarely complacent vibe about them, confidently skipping through time signatures and harmonies, always conveying the joy they take in sharing their bright, colorful music with their audience.

The group has gone through numerous personnel changes (only Stewart and bassist Robert Black remain of the original lineup), performed countless concerts, premiered bucketfuls of new works, and even transformed into cartoon characters for an appearance on PBS’s Arthur. Their brand of post-minimalism sometimes seems as set in stone as sonata form, but just as there are very good sonatas, there is very good post-minimalism.

Bathgate shone brightly in fellow founder Julia Wolfe’s Believing, propelling the music forward to a clattering peak before everyone else dropped out. The sound glided on the updraft of her quietly hovering cello notes and wordless, pure alto voice, and eventually everyone joined in haunting vocal undulations until they together tumbled back into the wild instrumental race to the finish.

Slightly less affecting was third founder David Lang’s Sunray, initially a delicate, crystalline meditation that bloomed into a bright whirlwind of squealing clarinet over a punchy guitar and piano riff. However, the drum set was overly amplified, burying the other layers in tom-tom thunder.

Kate Moore’s Ridgeway traded prickling dissonances between the strings, clarinet, and percussion before taking off, rolling, and pulsing its way into a clean guitar melody from Stewart that could have been the introduction to a New Wave hit. Still, it faded to formulaic about halfway through, leaving me wondering: Would the ending be a big build to a mighty chord or quietly dissolve? (The latter.)

The true versatility and expressive potential of the ensemble was on full display in the final two pieces; perhaps tellingly, these two differed the most from the previous selections. Stewart briefly spoke before Steve Martland’s Horses of Instruction, fondly remembering the recently deceased composer. The piece was a thoroughly funky barnburner, never lagging or loosening up from Cossin’s first four stick clicks until the end.

Bassist Robert Black exchanged his double bass for an electric to fully unleash the sinewy line. Ken Thomson danced in front of his microphone, bending his knees into each note, even jumping sometimes as the sound lifted him into the air, saxophone and all.

The evening ended with Philip Glass’s Closing, a callback to minimalism after an hour of focusing on its evolutions. The sound billowed and undulated through the chapel, achingly sweet while losing none of the previous piece’s vitality.