It's hard to dislike the San Francisco Chamber Orchestra's stated mission of "bring[ing] the immediacy and intimacy of music for small orchestra and chamber ensemble to audiences of all ages." It's even harder to dislike its motto of "fresh, fun, first-class, and free" — talk that they walk by presenting professional-caliber concerts at an admission charge of $0. Listeners are simply invited to become paying members. The rewards include preferred seating, and the inherent satisfaction of underwriting a great operation.
It would take a heart of stone to dislike the concept or execution of the "Variations" concert that the orchestra offered at four venues last weekend. Music Director Benjamin Simon recruited two talented principal soloists from among colleagues at the San Francisco Conservatory, then assembled for them a coherent program of Baroque and modern works (Bach, Vivaldi, Roberto Sierra, and Joaquin Turina).

The results were mostly delightful on Sunday at Berkeley’s First Congregational Church. And when the mix wasn't perfect, the cause usually lay beyond one orchestra's control: It involved inherent problems of blending modern instruments with Baroque music, and with each other. 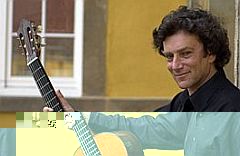 The first soloist was David Tanenbaum, an internationally renowned guitarist who chairs the Conservatory's guitar department. The second was Audrey Vardanega, a pianist and student in the Conservatory's Prep Chamber Orchestra. At age 12, Vardanega has already compiled a resume that most people won't achieve in a lifetime. She's won awards both as a piano soloist and as a composer, also plays violin, and studies acting at American Conservatory Theater. Not bad for seventh grade, even at Berkeley's Crowden School. 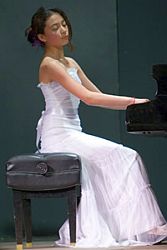 The concert began with Vivaldi's Guitar Concerto in A Major, RV 82, a piece that took a little unpacking on Sunday. The opening Allegro non molto revealed some shaky intonation among the strings. It also immediately posed the problem of the classical guitar as an orchestral instrument (and I write here as a guitarist): Even discreetly plugged into a small amplifier, Tanenbaum could barely be heard against the ensemble.
Reticent Guitar
Vivaldi originally wrote this piece as a lute trio, and its two remaining movements better showed off the orchestral version. In the Larghetto, the guitar stood out nicely, while the orchestra blended sonorously as one big, and consistently tuned, continuo.

The closing Allegro really blossomed, with more open harmony that revealed the textures of individual strings (notably, the principal cello). Here, the guitar's inherent pizzicato contrasted effectively with an ensemble that had permanently found its groove.

A natural bridge between Tanenbaum's two guitar solos was a Spanish piece, albeit with neither Tanenbaum nor guitar. Joaquin Turina's La Oración del Torero (1925) is a 10-minute tone poem portraying a "Bullfighter's Prayer" and ensuing battle. This too was expanded from a lute setting — first a lute quartet, later arranged as a string quartet. The orchestral version is a flurry of colors and tempos. The Seville-born Turina interweaves Spanish folk influences with the planing ninth chords he absorbed from Debussy and Ravel in early 20th-century Paris. It's a lyrical, captivating, and challenging piece, whose shifts the orchestra handled deftly.

Tanenbaum returned for Roberto Sierra's Pequeño Concierto for Guitar and 5 Instruments, which the Puerto Rican-born composer wrote for him in 1998. The other instruments are flute, clarinet, oboe, violin, and cello. The result was another panchromatic 10-minute work — a kaleidoscope for these instruments' contrasting colors. Sierra (whose Borikén tops Berkeley Symphony's March 13 program) has the six musicians chase, imitate, and blend with each other above a 3-3-2 ostinato, and often over pedal tones.

Strains of the opening “Ritmico” recalled Stravinsky's writing for woodwinds. The closing “Preciso” had rolling downward passages that made me think of Copland, with his open chords' thirds (and sevenths) filled in — Americana tropicale. The six performers showcased all of this beautifully. The irony is that despite its top billing, Tanenbaum's guitar part was incidental to much of the color palette. It served largely as the ensemble's rhythm section, with occasional foregrounding as a percussion instrument.
Mastery From One So Young
The program's all-Bach second half began with Vardanega's solo, the Piano Concerto in F Minor, BWV 1056. The young performer strode out confidently, and played with assurance and mastery to match. Her touch throughout was quite legato, which slightly undercut the nimbleness of Bach's writing and her articulation. But on another level, it worked. This concerto is a fiercely striding piece, and Vardanega's tone reminded me surprisingly of jazz pianists in the Stride tradition (think of the recently deceased Oscar Peterson).

I have a hunch that I won't be quibbling with Vardanega's interpretation once she reaches the ripe old age of, say, 14.

The concert closed with the Brandenburg Concerto No. 2 in F Major, BWV 1047. Featuring four solo instruments (trumpet, flute, oboe, and violin), this work was cleverly programmed to mirror Sierra's instrumentation. A Baroque crown jewel, the Second Brandenburg is also extremely hard to pull off. SFCO encountered two problems in getting the blend right.

First, Scott Macomber's trumpet part (itself extremely difficult to play) tended to overshadow his fellow soloists. Second, Robin Sharp's solo violin, in particular, was sometimes overwhelmed by the ensemble of modern strings behind her. Flutist Tod Brody and oboist Peter Lemberg held their own pretty well. And all the performances were impressive, especially when the mix worked.

Michael Katz is a writer and sometime classical guitarist. He has freelanced for the Berkeley Daily Planet, The San Francisco Examiner, The Onion, and The Boston Globe.