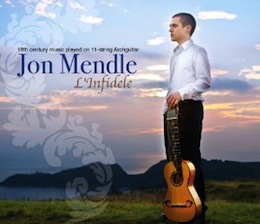 Since making his Carnegie Hall debut at age 19, classical guitarist Jon Mendle has rapidly built a reputation as a versatile, innovative musician. He tours with Yo-Yo Ma and the Silk Road Ensemble, is a member of both the San Francisco Guitar Quartet and the Pacific Guitar Ensemble, and as a solo artist recently released an exquisite first album, L’Infidele (In a Circle Records). Mendle’s sensitive phrasing and gorgeous tone bring to life some beautiful and seldom-heard 18th-century repertoire.

Guitarists are very familiar with the solo lute, violin, and cello works of Johann Sebastian Bach, but the outstanding revelation on this recording is Carl Philipp Emanuel Bach’s “Prussian” Sonata V, originally written for harpsichord. The great Bach’s second surviving son wrote in a style quite different from his father’s, being less interested in the portrayal of idealized moods and more interested in capturing the mercurial nature of daily life. His deeply felt Andante looks forward to Mozart. Mendle’s use of expressively varied tempo and elegant ornamentation convey an emotional profundity.

The greatest lutenist/composer of the Baroque era, Silvius Leopold Weiss was accomplished enough to have the honor of being invited by his friend J.S. Bach to participate in an amicable competition improvising fantasias and fugues. Weiss’ Sonata: L’Infidele, a six-movement dance suite influenced by Turkish music, is made vivid by Mendle’s wide palette of tone colors and dynamics. The concluding Paysanne is unusual, exciting, and colored by biting dissonances.

Adam Falckenhagen, a student of Weiss, was the right age to have been either a younger brother of J.S. Bach or an older brother of C.P.E. Bach. His Sonata IV features the capricious moods favored by the younger generation, as well as some brilliant virtuosic playing.

Mendle plays an unusual instrument on this recording, an 11-string Archguitar, built by San Francisco luthier Alan Perlman to combine the qualities of the Baroque lute and the classical guitar in one instrument. The album was produced by the great Sergio Assad and recorded at Quaver studios in Seattle by Kevin Callahan.