With the announcement that 2008 will mark the farewell of the Beaux Arts Trio, its every remaining performance is precious. Cofounded in 1955 by pianist Menahem Pressler, who remains with the group (in his 84th year), the Beaux Arts Trio has, for many of us, served as a model of great piano trio interpretation.
Just as earlier generations were schooled on the trio recordings of Thibaud, Casals, and Cortot, so have many in our own generation educated themselves by listening to some of the more than 50 recordings the Beaux Arts Trio has made in its various incarnations. Its string component may have changed, with Antonio Meneses coming onboard in 1998 as only the third cellist in the Trio's history, and with Daniel Hope joining in 2002 as its fifth violinist. Yet if Saturday's performance was any indication, the greatness remains. 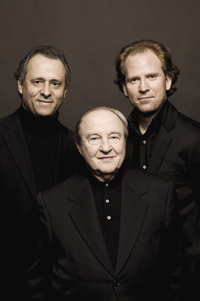 Thanks to Daniel Levenstein's Chamber Music San Francisco, a sold-out audience of 333 (minus a few no-shows) spent Saturday afternoon listening to the Trio in the remarkably natural and relaxed acoustic of the Florence Gould Theater at the Palace of the Legion of Honor. The repertoire, which was to have consisted of two works by Schubert plus Beethoven's "Archduke," was changed after the program booklet was printed.

As Levenstein explained at the start of the concert, you can go to a fine restaurant and order two steaks and a potato, but an astute waiter might suggest that you cultivate a more varied palate. Such was the case with the Beaux Arts, which begged the audience's indulgence in its substitution of Shostakovich's spicy, emotionally gripping Piano Trio in E Minor, Op. 67, for Schubert's Trio in E-flat Major, Op. 100 (D. 929).

Within the first 10 seconds of Schubert's extended Adagio, the Notturno in E-flat Major, Op. 148 (D. 897), it became clear that the Beaux Arts retains its magic. The playing was exquisite, with chords sounding as if suspended in space. Pressler's gossamer touch defined the Trio's interpretation, his muted tones the essence of refinement. With music-making this exquisite, taking notes was out of the question. All I could do was close my eyes and pray that, whenever my life comes to an end, I may be blessed to exit this plane in such a holy state of grace.
A Trio of a Different Feather
The Shostakovich was another creature entirely. Written in 1944 as a memorial to the composer's close friend Ivan Sollertinsky, the Piano Trio in E Minor begins with eerie high sounds in the cello. Meneses' sounds were certainly eerier than those that cellist Milos Sádlo made in his unedited recording with the composer and David Oistrakh in 1947, and quite effective at that. While Pressler adopted a far more declamatory tone than in Schubert, his core lightness remained, providing ample contrast to Hope's perhaps intentional, overly scratchy stabs at the start of the second movement Allegro.

Hope did a wonderful job with the third movement's dancelike accents, as the macabre tune veered off course in a manner both humorous and ominous. Although he occasionally ended a note too abruptly, without rounding off its edge, his violin sang magnificently at the top of the range and duetted beautifully with the cello at the end of the movement.

Beethoven's Trio in B-flat Major, the "Archduke" (Op. 97), proved a disappointment. The opening Allegro moderato was dismayingly slow to the point of feeling ponderous. At times Hope was a bit jerky when introducing themes, as though trying to push them along, while Pressler seemed intent on pulling back. Although the playing occasionally took flight, it too often verged on the lugubrious. It almost seemed as if Beethoven, playing his final performance before he succumbed to deafness, was too mired in grief and loss to voice the joy inherent in his writing.

Similarly, the second movement was not as carefree and jaunty as you might wish. The start of the third movement's remarkable Andante cantabile was gorgeous, with Beethoven's exquisite first theme voiced with the same grace as was Schubert's in the Notturno. But after the Trio announced the final Allegro with startling strength, its tempo again turned earthbound. Occasionally Pressler's runs seemed stiff, as though the fingers were refusing to move as fast as the mind wished. Even though he dug in at the end for a rousing finish, I was left with the impression of a recalcitrant "Archduke" unable to emerge from the shadows.

The group performed two encores, both of which showed Pressler at his best. In a piece by Johann Nepomuk Hummel based on themes of Mozart, Hope's violin sang. And with, in Hope's words, "one of the most beautiful movements Beethoven ever wrote," the Adagio from Op. 11, Meneses stated the opening theme to perfection and Hope mirrored both his touch and his tempo. With Pressler beaming first at the piano and later in his bows, the Trio offered a happy conclusion to a mostly memorable afternoon.