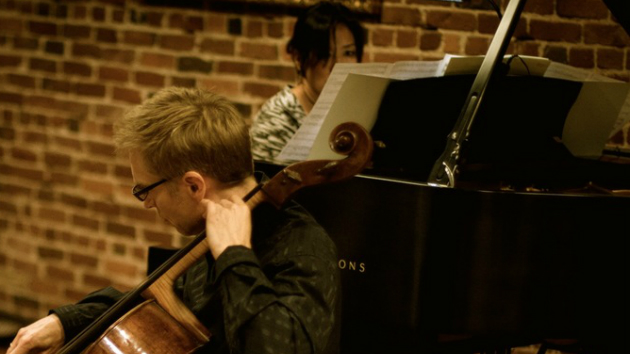 In a vivacious performance on Friday evening — the second installment in a series presenting the complete Beethoven piano trios — the B3LLA Piano Trio demonstrated its aptitude for interpreting both the composer’s early and mature works. B3LLA is pianist Mimi Lee, cellist Eric Gaenslen, and violinist Nathanael Bartley, whom Frederick Lifsitz (of the Alexander Quartet) replaced for this concert, at Old First Church.

Friday’s program opened with Piano Trio Op. 1 No. 3, Beethoven’s favorite among his debut collection, and in the key of C minor, which would later become a personally significant key. Lifsitz played with forceful expressivity in the dramatic first movement, which in many places points toward the Romantic era. In the third movement, an extraordinarily mature minuet, pianist Lee’s flourishes sounded effortless and cellist Gaenslen played his melodies with charm. The finale, a quirky prestissimo with a tense rhythmic undercurrent, was at times ragged. Yet, it was also fearless — a refreshing quality in any group, let alone one adjusting to a change in personnel.

Written in 1797, but more Mozartian than the earlier work, the Piano Trio in B-flat major, Op. 11 can sound lackluster. However, B3LLA’s performance added a level of sophistication to even the simplest of phrases. The second movement’s minor section was compellingly murky, and Gaenslen, in particular, imbued his passages with a variety of characters — warmth, dryness, introspection.

For the finale, Beethoven composed a set of variations on a melody from Joseph Weigl’s popular comic opera, Love among the Sailors, of the same year. Weigl’s theme pales in comparison to Beethoven’s melodic writing, but again, B3LLA’s interpretive powers triumphed. Lee’s solo variation was both spritely and precise; she phrased the jarring diversion to G major (a key distant from the movement’s home key of B-flat major) with comedy. The fourth variation wasn’t merely in the minor mode; it journeyed to a totally different emotional realm.

The evening concluded with Piano Trio in D major, Op. 70 No. 1. Beethoven’s famous piano student Carl Czerny nicknamed the work “Ghost Trio,” describing it as evoking the ghost of Hamlet’s father. Actually, at the time of the trio’s composition in 1808, Beethoven was discussing another Shakespeare play — Macbeth — with dramatist Heinrich von Collin. Some musicologists infer that he composed the slow movement, in D minor, after the three witches. It can be difficult to maintain momentum in such a long and slow movement, but B3LLA’s performance was well-paced, especially in the dramatic buildup to C major.

This movement is the core of the work and was the centerpiece of Friday’s performance. It can be difficult to maintain momentum in such a long and slow movement, but B3LLA’s performance was well-paced, especially in the dramatic buildup to C major. The strings played with haunting thinness of sound, and Lee’s left-hand trill figures were quietly ominous, particularly affecting in the chromatic lines toward the end of the movement. Indeed, the ghostly atmosphere B3LLA established proved difficult to shake off in the finale, which was not as strongly characterized as the other movements.

Throughout the evening Lifsitz’s sound was never less than gorgeous, and Lee’s performance was mostly solid, considering that she had to continually correct the work of her blundering page turner. Gaenslen’s sound was often lost, but when he did emerge, he performed with utmost musicality. Most remarkable was the group’s interpretative daring, which made the performance much more interesting than a technically perfect rendition would have been. The third installment of the series, on October 16 at Old First, shouldn’t be missed.