Watching Nordic Affect is a special experience. It’s not merely the premise — admittedly novel — of new music performed by four women playing Baroque-period instruments. No, there’s some ineffable synergy between the performers, and extending to the young composers whose works they play, that, on April 11, utterly transformed the air of the bustling BAMPFA atrium. 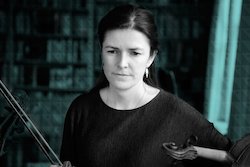 The Icelandic quartet — Halla Steinunn Stefánsdóttir, violin; Guðrún Hrund Harðardóttir, viola; Hanna Loftsdóttir, cello; and Guðrún Óskarsdóttir, harpsichord — is on its first U.S. tour, with music from the album Raindamage, a quietly captivating record that feels too short. Indeed, the six works on Tuesday’s program were brief, mostly soft, and could, to some extent, be branded “ambient” — yet each was distinct in character.

Conventional harmonies framed the quirkiest work, [:n:] by Hlynur Aðils Vilmarsson, but tiny pops of semi-pitched material populate the capricious middle section: the strings pluck below their bridges, or with the left-hand fingers only slightly depressed, and the harpsichord gently moans as it’s rubbed with a mallet. Hlynur uses multitrack layering to augment the forces in the album version, but on Tuesday, visually following these sound effects to the motions creating them was rewarding on its own. 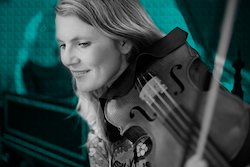 Hildur Guðnadóttir’s Point of Departure, on the other hand, recalls the music of eras past. The string players hum along with their legato tones to create rich harmonies; then, surrounded by a mist of shimmering violin and viola drones, the harpsichord and cello form what sounds like the skeletal bass line of some long-lost trio sonata. The effect is haunting, and though the piece subsequently rambles, dallying with minimalist rhythmic motifs and wide-eyed vocalizations, this initial grip doesn’t completely lose its hold.

Strongest in concept was the string trio Clockworking by María Huld Markan Sigfúsdóttir. Lyrical, syncopated motifs in the upper strings ride on the cello’s steady pulse, evoking manual labor as a breeding ground for music and rhyme. Initially, tiny chimes seem to come from some hidden player — but it’s in fact the electronic track, which gradually assumes melodic importance. The performers alternately approach and recede from the foreground, and though María’s harmonies are simple, this tightly edited work is sophisticated in its portrayal of the worker’s physical awareness during the execution of repetitive tasks. 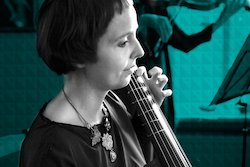 Two works, by Anna Thorvaldsdóttir and Valgeir Sigurðsson — the program’s most well-known composers in the classical and producing worlds, respectively — had different perspectives on movement and the ceremonial. In Anna’s Shades of Silence, intertwining lines obscure where individual players end and begin, creating an underlying impenetrability of texture in this solemn work. Changing pitch centers imbue Valgeir’s trio Raindamage with a directional quality that is, impressively, independent of rhythm and volume. Particularly effective is the cello’s pizzicato that triggers metallic strikes in the subtle yet significant electronic track, and throughout the work, the rich sound-world Valgeir creates belies the group’s size. 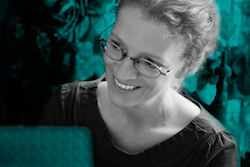 These pieces waxed and waned in intensity, but the program’s last piece, Úlfur Hansson’s Þýð, had a clear arc. Separated into three groups, participating audience members continuously hum a resonant trichord of a perfect fourth and fifth, which accompanies the string trio. “Hang in there,” violinist Halla said after we’d found our pitches, “and we’ll see you at the end!”

During the nine minutes we hummed, independent instrumental lines, initially soft and slow-moving, intensified. The players distort their pitches with overpressure — a gratifying effect, against the tranquil choral background — and their own humming grows into swelling cries. But the texture calms almost as soon as the climax registers, and the musicians smoothly tune down their strings in one shared slide: a natural (and literal) unwinding, and an easy end to a charming evening.