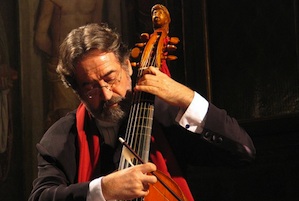 The biennial Berkeley Festival is a celebration of Early Music, with historical performance practice the defining style. But the range of music covered by these performers has steadily expanded through the decades. And no one is a more intrepid explorer than Jordi Savall, a brilliant, longtime star of the Early Music revival and frequent visitor to Berkeley.

Savall left his viola da gamba home on this trip. His closing concert, called “A Dialogue of Souls: Istanbul,” consisted of music from the court of the Ottoman empire in the early 18th century, as well as popular music of that time.

In this concert, each group of pieces included works both from the written notation of Ottoman court music and from oral traditions, mainly Armenian and Sephardic. The classical Ottoman pieces were preceded by a taksim (prelude), a short, free-form, unmeasured solo exploring the notes of the mode about to be played, and comparable to the alapanam, which introduces a classical Indian raga. The rhythm section then came in — usually santur, a kind of hammered dulcimer, plus percussion — and the piece began. A couple of popular pieces would follow, Sephardic and Armenian, and the group would end with another classic from Dimitrie Cantemir’s collection.

The program was based on Cantemir’s The Book of the Science of Music, published in Istanbul early in the century. Turkish musicians at the time were already using an alphabetical notation. Cantemir, a composer and performer, developed a more nuanced notation which preserved the tunings and melodic characteristics of many modes, as well as the complexity of rhythmic organization. As the concert demonstrated, the book is a striking written exploration of the different musical directions taken by Europe and the Middle East, starting from the same instruments.

While Cantemir was writing his book, J.S. Bach was writing the Well Tempered Clavier. Turkey was staying with a kind of melodic variety which Europeans ceased to care for, and Europe, dividing the octave arbitrarily into half-steps, was continuing the development of harmony and extending the range of scales up and down by compromising tuning with equal temperament. What the West gave up was the musical and emotional impact of enormous melodic variety and rhythmic complexity. What the East didn't go for was the musical and emotional impact of harmony.

Jordi Savall played two bowed string instruments. One was the rebec — not the small pear-shaped 15th-century precursor of the violin, held on the chest, but an instrument of the size and shape of the modern violin, played like a viol, held upright on the lap. The other instrument, the rebab, was longer, and played like a bigger viol. Dimitri Psonis played the santur and the Moorish guitar, which looks like an oud or lute. David Mayoral played a collection of percussion instruments. The program told us that he performs with “Spanish ensembles across many genres, ranging from Medieval, Renaissance and Baroque to ethnic and fusion.”

Judging from the size and enthusiasm of the audience, there are a lot of people who are also into fusion.