There’s nothing more accustomizing than “breathing out and breathing in,” according to Henry Higgins in My Fair Lady. The utter opposite is true is Sofia Gubaidulina’s 2009 Fachwerk, which, in a remarkable coup by Music Director Joana Carneiro, received its U.S. premiere Thursday evening by the Berkeley Symphony.

The “breathing” was accomplished by Norwegian soloist Geir Draugsvoll’s bayan (bye-YON) a Russian accordion that’s all buttons, no keys. In Gubaidulina’s concerto for this instrument, Draugsvoll became a single organism with his bayan’s bellows, whooshing chord clusters or just air at climactic moments in ways timed to his own, pained, bodily expressions and breathing. These were death rattles, not simply notes, in a compelling 34-minute journey from mystic grandiosity to despair and back again.

The awkward English term for the German fachwerk is “half-timbering,” an architectural feature readily identifiable to visitors at Stratford-on-Avon, but one not in most tourists’ vocabularies (see illustration).

Consistent with Gubaidulina’s love of all things Bach, her concerto is meticulously constructed yet satisfying to the emotions as well. Superficialities of the deeply theoretical basis underlying the work were described by the composer in the program notes: Horizontals of fachwerk and the bayan itself represent melody, verticals the chords. I took the diagonals to be expressed by the many rising and falling rushes of melody and glissandos (the latter particularly effective on Principal Percussionist Ward Spangler’s marimba). 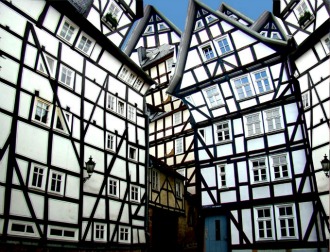 The piece, on first acquaintance, comes across as episodic, with many striking passages, and several Bartokian “night-music” sections. Fortunately, it’s bookended with pan-tonal chord progressions, which bring a sense of closure and are reminiscent of Vaughan Williams’ Sinfonia Antarctica and of the harmonic approach taken by Icelander Jon Leifs in most of his music. The fascinating elements in between would benefit from re-listenings.

Conveniently, the work is available in recording and partially in video, neither of which do visual justice to Draugsvoll’s consummate artistry, which earned a loud, standing ovation from Berkeley Symphony patrons. Hats off also to Carneiro, who prepared her musicians impressively for this concert.

Just as a half-timbered home in Stratford-on Avon is bound to have uneven floors, low ceilings, and plumbing issues, the rest of the concert, while a pleasure to live in, was not without problems. The lack of brass in the Gubaidulina was made up for by a brilliant idea of Carneiro’s to open the concert with two works of Giovanni Gabrieli, Canzon septimi et octavi toni and Sonata pian e forte. Brass players were positioned antiphonally in the balcony and completed a not faultless go at the canzon. Without announcement, however, the sonata was omitted. Worse, the Zellerbach acoustics ate up the resonances like neap tide in Venice.

After intermission, Carneiro conducted a spirited rendition of Ravel’s orchestration of Mussorgsky’s Pictures at an Exhibition. She was most effective in the lighter and faster numbers. Saxophone and tuba soloists in the “Old Castle” and “Bydlo” respectively were fine—with minor glitches. Principal trumpet Ari Micich was impressive in the “Schmuÿle” 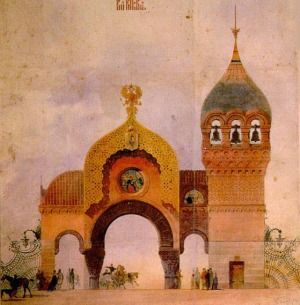 section, and the strings and woodwinds were in fine fettle throughout.

Mussorgsky’s work is a staple of the repertoire, yet it amazes me how rarely any of Viktor Hartmann’s paintings and sketches, which inspired the music, are pictured in programs. At a minimum, it should be mentioned that only six of the 11 images that inspired the composer are known for certain, a sad commentary on the evanescence of all things artistic, and life in general.

While the life of the work has been lost over time in one respect, I hope someday a conductor revivifies the music by playing it as if the audience were actually walking through an exhibition. The Promenade sections would then not be taken in strict time (the composer already hints at this by alternating 5/4 and 6/4 measures), but even more unevenly, like a person would walk, pausing and staring about, looking for something attractive, turning away from the less so. One could even take the radical step of playing “The Great Gate of Kiev” pianissimo, being more true to its antique 16 x 24 inch sketch, now yellowed with age, of a monument that was never built.