Which of the following is the best indication of a wild ride to come?

(a) When Indiana Jones takes out his whip.

(b) When thugs chasing Bullitt fasten their seat belts.

(c) When pianist Conrad Tao takes off his coat.

If you answered (c), you were at the Berkeley Symphony Thursday night. All during his magnificent rendition of Beethoven’s “Emperor” Concerto, Tao’s arms were straightjacketed by a tight-fitting suit. He had to flail his arms out vigorously behind him. Had they gone up instead, ripping sounds would have supplemented the music.

Following patrons’ tumultuous response to the concerto, Tao returned, now coatless, for two minutes of encore virtuosity with a combination of speed, difficulty, and perfection of execution that was utterly jawdropping: Elliot Carter’s 2006 Catenaires.

I was impressed with Tao when I first saw him at Aspen play the Mozart K. 242 concerto with Peng-Peng Gong, at age 12 in 2006. He has gained many honors since then as a composer and violinist, in addition to his piano work, and displayed a remarkable affinity for Beethoven at Berkeley, with ever-interesting nuances of interpretation combined with a surprising display of power considering his relatively lightweight frame.

But Tao wasn’t the only surprise. Music Director Joana Carneiro was not able to conduct due to illness. Her counterpart at the Phoenix Symphony, Tito Muñoz, was asked five days before the concert if he could pinch hit—not an easy thing to do since the first work on the program was Witold Lutosławski’s tricky Concerto for Orchestra. 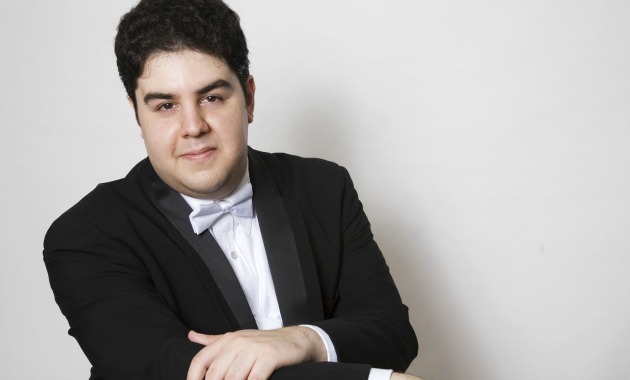 Muñoz confessed to the audience, in an avuncular introduction to the concert, that the opportunity to conduct the Berkeley Symphony was so appealing he would have claimed he knew the work forwards and backwards even if he’d never seen it before. Fortunately, he actually had prior experience with the work, and it showed as he carefully yet energetically guided the orchestra through its paces with his long baton (abandoned, BTW, in the Beethoven).

Lutosławski’s Concerto brought international recognition to the composer, and remains his most populist work. Premiered in 1954, it is reminiscent of many of the currents of the times: Bartok’s folk research, Shostakovich’s drama, Stravinsky’s acerbity, and the fad of writing passacaglias. I don’t know whether Lutosławski had heard Benjamin Britten’s entry in the form, from his opera Peter Grimes, but I couldn’t help thinking of its manner as it decorated the opening third of the Concerto’s finale.

The Lutosławski began the shortish two-work program, but I cannot judge the quality of the performance since I was seated too close to the orchestra. There you can hear the sounds reverberating so much back and forth from the walls around the stage, all sense of precision is lost when it comes to discerning brass and woodwinds. The players seemed committed, and I thank them for taking on a fine composition.

Just as when Conrad Tao’s coat comes off, there will be great joy when Zellerbach Hall is razed.