With a first-rate cast, world class conductor, and superb period instrument orchestra, the El Cerrito–based company reinvented as Berkeley West Edge Opera has taken another major step forward into the future. Curiously, the vehicle for forging ahead is a modern adaptation of George Friedrich Handel’s comedy Xerxes, which premiered in London over 272 years ago. All’s the better, given the uniform excellence of the production. 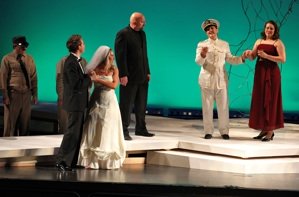 Lest anyone wonder whether the company’s priorities lie with music or visuals, Artistic Director Mark Streshinsky and Music Director Jonathan Khuner made things perfectly clear. Liliana Duque Piñeiro’s set mainly consists of a simple, large stylized wire tree designed by Mark Canepa, and the outline of a boat in the second of the opera’s two acts. Variety comes from Lucas Krech’s bold backdrop lighting, which changed according to mood. In general i'm not a fan of lighting that turns red when someone is angry and green when they sing about nature — it reminds me of a movie soundtrack that refuses to trust the dialogue — but in this case, it provided welcome variety.

As to the musical end of things, where to start? Conductor Alan Curtis, who once taught at UC Berkeley, is a renowned period instrument specialist. The West Edge Baroque Orchestra plays original and copies of period instruments. The lead artist, mezzo Paula Rasmussen, has made an international specialty of the role of Xerxes, and even sings the role on DVD. This is a major production in the fine acoustic of a high school auditorium. 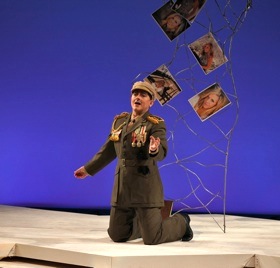 After some amusing shtick during the overture, performed by principals attired in Romy Douglass’ modern garb, the opera began as Rasmussen (Xerxes) sang the opera’s hit aria, “Ombra mai fu.” She seemed totally assured and at ease as she delivered a performance that was as impeccable as it was beautiful. Although Rasmussen tends to hoot a bit when she applies pressure at the top of her range, her absolute assurance, technical proficiency, and wide compass are a must-hear.

Equally rewarding are three other principals: soprano Angela Cadelago (Romilda), a 2005 Metropolitan Opera Regional Audition Finalist; countertenor Ryan Belongie (Arsamene), a current Adler Fellow with San Francisco Opera; and mezzo Sonia Gariaeff (Amastre), a three time district finalist in the Met’s National Council Awards. Although no one has a flawless voice everywhere in the range, their singing and artistry are nonetheless superb. Especially when her racing vibrato settled down in the second act, Cadelago’s beauty of tone, technical prowess, and ease on high were as vital as Belongie’s oft-astounding vocalism. As for Gariaeff, her final aria was perfection itself.

In her first professional role since graduating the University of Wisconsin, tiny soprano Anna Slate (Atalanta) was a physical delight. Moving with the flexibility of a young child, Slate slithered and sprung around the set while displaying a light, mousy voice that worked well in comedy. Bass-baritones Donald Sherrill (Elviro) and Roger McCracken (Ariodate) both have fine tone in their lower and mid-ranges, with Sherrill hilarious singing falsetto in drag. And the chorus, anything but a helter-skelter grab bag of whomevers, sang wonderfully on opening night.

So What’s It About?

In this modern adaptation of Handel and his librettist Silvio Stampiglia’s update of Nicolò Minato’s 60-year-old libretto, Streshinsky has, in the words of Assistant Conductor Gilbert Martinez of MusicSources, attempted to make stock commedia dell'arte characters “understandable by modern audiences.” When it comes to Xerxes, good luck.

Streshinsky has a very individual take on ancient Persia’s supreme military commander. In his view, King Xerxes, who initially seems more connected to a tree than to the woman he’s supposed to marry (Princess Amastre), then becomes totally obsessed with the other woman he’s decided to marry (Romilda), is at least autistic, if not suffering from Asperger’s Syndrome.

Well, maybe. Xerxes doesn’t act remotely like anyone in the autistic family I recently spent time with, but he is certainly a dolt when it comes to love. More to the point, if you want to be literal about Xerxes’ condition, how do you overlook a military commander who just happens to be a woman singing a male role, and a man who plays a man but sings in a woman’s range?

Short answer. It’s an opera by Handel. Don’t worry, be happy, the singing is wonderful. 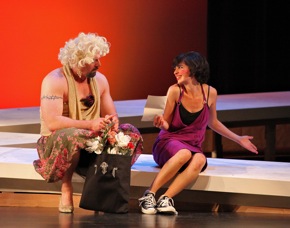 Back to the plot. Princess Amastre wants King Xerxes even if he treats her like dirt. Romilda turns out to be a seemingly vapid cross between a teeny-bopper and Marilyn Monroe who is nonetheless faithful to her man Arsamene, who is also Xerxes’ brother. Romilda’s sister, Atalanta, turns out to also be hopelessly in love with Arsamene. It gets more convoluted from there.

The whole thing serves as an excuse for some highly amusing stage shtick. That includes the aforementioned drag impersonation by Xerxes’ servant Elviro, some strip-to-the-undies lovemaking by Romilda and Arsamene, more stuffed animals than at your average carnival, and enough posturing by the well-proportioned Romilda to qualify for every trucker’s long-haul fantasy.

It ultimately makes sense, as long as you’re willing to entertain the senseless. What anchors it all is the music. Need I repeat how good the singing and playing are?