"These are the things I know," begins Amy Tan's novel The Bonesetter's Daughter. And, these are the things I know after the Saturday premiere of the opera by Stewart Wallace, with Tan's libretto:
There are amazing light shows, fabulous projections, and acrobats flying through the air — not quite with the greatest of ease, with their wires showing — and the murderous villain stepping out, Elvis-like from a glass casket, only to be carved up later by an airborne ghost, body part by body part. Then, more son et lumière, more extraordinary projected sets, lavish costumes, a Hong Kong harbor that folds up seamlessly, the (alleged) O.J. Simpson murder case reimagined under the giant shadow of a shark, and so on. 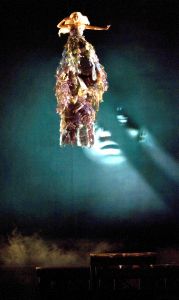 Is this "Cirque du Bonesetter" in Vegas? No, we are in the War Memorial Opera House, a venue that is not entirely alien to razzmatazz, although perhaps not this concentrated. Bonesetter is a fascinating, spectacular show, but it doesn't sustain the complex fusion of music and drama that makes a good opera, and rarely does it come through as something greater than the sum of its parts. 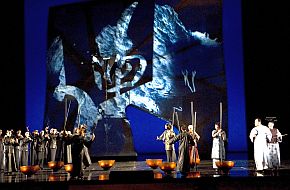 If not quite whistling the sets, you leave Bonesetter impressed by Chen Shi-Zheng's cinematic stage direction, Walt Spangler's sets, Han Feng's costumes, and Scott Zielinski's lighting design. But, while you will be moved by Zheng Cao's sterling performance in two of the three leading roles, the bones of the show — the music and libretto — are lackluster and overwhelmed by the production.

Wallace's score, though conducted with passion by Steven Sloane, is weak. With the exception of the Prologue and two chorus numbers, it is mostly a soundtrack; "arias" are really recitatives with accompaniment; and the portions representing Chinese opera come through as effortful, quite without the haunting effectiveness of the "Japanese" music in Sondheim's Pacific Overtures. Inconveniently (for the audience), Wallace’s best work is heard during the interminable death scene of the opera's finale, where he uses a simple triplet ostinato to great emotional effect. (Act 1 runs 77 minutes, followed by a 25-minute intermission, and the second act is 47 minutes, but feels longer.) 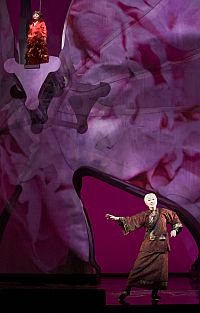 It's up to the text to carry most of the intended emotional impact, and there, too, the opera has a problem. Bonesetter, the novel, is a gripping, important story about three generations of women whose lives span untold and collective suffering in early 20th-century China as well as one family's neurosis in present-day affluent San Francisco. 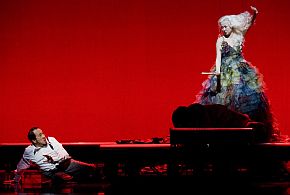 Tan's libretto conveys the basic plot, but the vivid details, which make the second half of the novel work so well, are absent. The novel is a Shakespearean tale of evil and a limited amount of good, a series of harrowingly Dickensian adventures culminating in a Tales of the City kind of narcissism. In the opera, the characters are there, but they have been reduced to melodramatic cardboard figures, shown in virtual silhouettes against light shows and fireworks. Their depth and significance have been erased. The emotional high they experience from surviving yields predominantly to post-traumatic psychosis, sadness, and depression. Catharsis at the end is implied, not conveyed.

In a vocal and dramatic coup, Cao almost overcomes all the hurdles by herself, as both present-day Ruth (the semi-autobiographic representation of Tan) and her mother Luling as a young woman in China. (Present-day Luling is sung by Ning Liang in a thrilling performance.) Cao's steely velvety mezzo is a joy to hear, and she brings both characters to life within the constraints of the heavyhanded libretto. 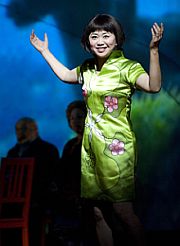 Precious Auntie, the first of the three generations of women at the heart of the Bonesetter, appears as a ghost, her music written in the manner of chinoiserie (notwithstanding the composer's emphatic denial), and she is sung by Chinese Opera star Qian Yi, mostly suspended high above the stage. Qian Yi is more amplified than the rest of the cast, and the electronic assist is actually audible. 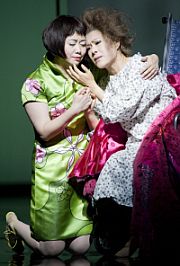 As Chang the Coffin Maker — the murderer-rapist/would-be child-abuser who is subject to a graphic revenge — Hao Jiang Tian, a veteran of Chinese companies and the Met, has a robust vocal presence. Wu Tong, James Maddalena, Catherine Cook, and Valery Portnov round out the top cast. Ian Robertson's Opera Chorus and young supernumeraries perform heroically. Aerial choreography is, intriguingly, by Ruthy Inchaustegui, who is credited in the program as Halle Berry’s main stunt double in the movie Catwoman.

Before the performance, Opera Association President George H. Hume appeared on stage to thank John A. and Cynthia Fry Gunn for their $40 million contribution, a possible world record of individual donation to an opera company. Some of the estimated $1.5 million cost of Bonesetter is being covered by the Gunns' gift. 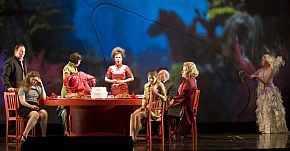