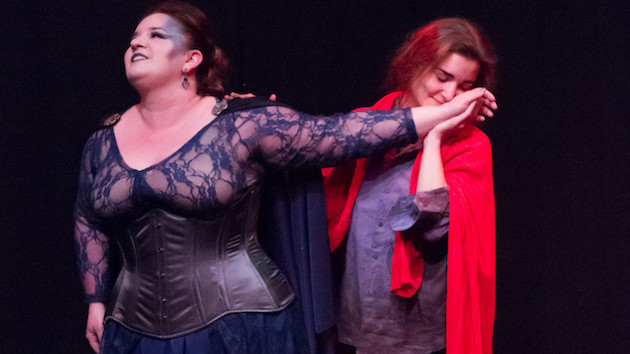 Handel wrote his Orlando furioso trilogy in the three years from 1733 to 1735. Now, in the three years of their existence, Black Box Baroque has performed the full cycle. The final opera, Alcina, tells of Bradamante’s mission to rescue her fiancé Ruggiero from the island of the sorceress Alcina. Thanks to mostly strong casting, and especially the brilliance of Danielle Sampson as Ruggiero, Black Box Baroque’s production cast a spell.

Director Sarah Young’s setting for the opera was minimal and modern. Some loose, contemporary translations in the supertitles provoked laughs: Bradamante first entered seeking a signal for her phone (rather than a path, “sentiero”), and insults like “mentitrice” were rendered as “lying bitch.” Alcina and Morgana wore flowing gowns and capes; everyone else was in ordinary-looking trousers.

The tiny stage of the EXIT Theatre (on Eddy St. in San Francisco) left little room for a set, just a black curtain and two chairs covered in colorful cloth. As illusions were lifted, lights flashed and the curtain dropped away to reveal the brick wall behind it. When Bradamante and Ruggiero destroyed the source of Alcina’s power, they simply uncovered the chairs, wrapped Alcina in the colorful cloths, and bundle her offstage. What should have been a climactic moment fell flat.

With so little else to see, the focus was entirely on the singing and acting. Danielle Sampson stole the show as Ruggiero. She entered dirty, with flyaway hair, wrapped in an enchanted blanket, completely dazed, smiling foolishly. Sampson’s voice is warm and wide-ranging. She nailed the tricky intervals in “La bocca vaga” and showed off exciting, rich tone, especially on her lowest notes. The musical highlight of the show was her buttery “Mi lusinga” (She deceives my sweet affection), which she sang with unbroken legato. Ruggiero is a long role, and Sampson’s voice flagged a little in “Sta nell’Ircana” (In her rocky lair), but even then her enthusiasm and charisma were riveting. 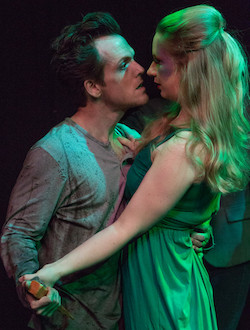 In the title role, Kelly Rubinsohn had a larger voice and more prominent vibrato than most Baroque singers. Her steely core of sound caught the resonance of the small theater. Her voice’s size was complemented by its agility, and she navigated the minefields of “Ombre pallide” (Pale shades, I know you hear me) with few slips. She also showed great expressive contrast, particularly between the two sections of “Ah, mio cor!” As her sister Morgana, Sarah Hagenbuch sang in a well-grounded voice that sounded particularly good in the lower and middle ranges but harsh at its top. Her trills and ornaments were excellent, and her lively “Tornami a vagheggiar” (Come quickly back to me) left more than one audience member humming at intermission.

Small opera companies often struggle to fill male roles well, but Alcina had an excess of riches. Matthew Peterson sang Melisso in a velvety baritone that left me wishing he had more than one aria. Jonathan Smucker is a polished singing actor, whose facial expressions and diction in “Semplicetto! A donna credi?” (Simpleton! You believe a woman?) were at once amusing and menacing. His singing is both accurate and varied, with a timbre that is well-suited to the Baroque repertoire.

The show has just two casting slips. Siobhan Raupach’s voice has a thrilling steel to it, but it’s too large and rough for the role of Oberto. Raupach didn’t seem comfortable with the coloratura in her arias, and her transitions between notes were harsh and pushed. Bradamante also disappointed. Ellen Presley has the vocal flexibility for the role’s fast-moving arias, but her too-light, covered sound failed to carry even in the 80-seat EXIT Theater. Her voice only soared on the highest notes. Her awkward acting was effective for most of the opera, as she disguised her identity and pretended to reciprocate Morgana’s affection, but out of place once she recovered Ruggiero.

The seven-piece orchestra valiantly tackled Handel’s difficult score, with Music Director Jonathan Salzedo nodding cues from behind the harpsichord. The oboes faltered on both tempo and pitch in the overture, but they made up for it in “Tornami a vagheggiar,” when they and the violins engaged in a playful and precise dialogue with Morgana’s singing. On the whole, the sound was both full and well-balanced with the singers — just right for the size of the space.

In a casual setting and on a low budget, Black Box Baroque created an Alcina that was both musically strong and dramatically engaging. San Francisco has a sad lack of Baroque opera, and it’s wonderful to see that gap being well-filled. Directors should take notice — this sort of repertoire is ideal for small spaces like the San Francisco Opera Lab’s Taube Atrium Theater and small companies like Opera Theater Unlimited. Black Box Baroque is doing great work, but one Baroque opera per year simply isn’t enough.