It has taken a year and a half, but the Oakland Ballet Company was back on stage Saturday afternoon in the city's Paramount Theater, and looking sharp as a sunny autumn day. Founder Ronn Guidi was also back after a bout of illness for which he "retired" in 1999. All the proceedings obviously benefited from his return, not to mention the revival of Oakland's old audience hits.
The program opened with Guidi's 1980 ballet Carnival d'Aix, Op. 83b, followed by a reproduction of Vaslav Nijinsky's historic 1912 Afternoon of a Faun, which was highlighted by copies of the original costumes and set designed by Leon Bakst for Diaghilev's Ballet Russes. Then came Guidi's setting of Satie's Trois Gymnopedies and the late Marc Wilde's 1974 Bolero. Michael Morgan conducted his Oakland East Bay Symphony throughout, while pianist Ellen Wasserman played the solo part in Carnival d'Aix, Milhaud's homage to his birthplace. 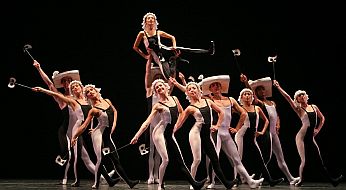 All photos by Marty Sohl

What most surprised me was the precision of the ensemble work and the sense of assurance in the solos. Granted, Guidi had not chosen much in the way of terribly demanding choreography, but that didn't matter when the dancing was so refined and timings were so polished. The fact that this was a program of fun choreography laced with bits of lyrical elements didn't hurt, either. Applause came often, and thunderously, from the sizable crowd — and at a matinee, no less.

Dance suggestions reek from Milhaud's Carnival score. It's a natural. In fact, this concert suite for piano and orchestra was drawn from the composer's ballet Salade, Op. 83 — hence the b behind the 12-movement piano suite. Guidi set the piece fancifully in an utterly charming commedia dell'arte style, replete with little unexpected comic quirks. 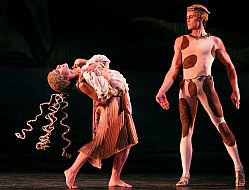 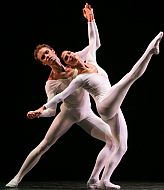 Guidi presented the Trois Gymnopedies, or imaginary Greek dances, as two duos, with the entire cast for the third piece. Having it danced with the orchestra's harpist on stage left struck me as only a distraction from the limpid flow of elegant dancing. If anything, the choreography was almost embarrassingly pretty, and the audience couldn't have loved that more.

Wilde's setting of Ravel's omnipresent Bolero is one of the most uncommonly original concepts I've seen. Unlike other versions, Wilde set Bolero abstractly, making it into a kind of concerto for individual soloists. What we saw was a bare stage set up to look like a dance studio. Most of the dancers were going through the usual stretching in rehearsal clothes when the curtain rose. Individual dancers would move to stage center one at a time to do their thing, solo. I found myself wondering how much of this was left to the dancers' discretion, as opposed to formalized choreography throughout.

There were a few duos, one highlighted by the male dancer reversing the usual role by jumping into the open arms of his female partner. Wilde also let go with some bits of male virtuosity, big jetés and such, and had one guy let fly with a serious display of virtuoso gymnastics. I found the entire work refreshing in its novelties. The one thing I thought annoying was the dancers' rhythmic clapping of their hands toward the climax. After all, the score is vulgar enough on its own. (As Ravel commented of his Bolero, "I've written only one masterpiece, and unfortunately there's no music in it.")

Morgan conducted well, which is not always to be expected at the ballet. Conducting for dancers is a entirely different undertaking than conducting symphonic performances. The orchestra played well, if not brilliantly, sounding as if they could have stood another rehearsal.

Only two Saturday performances of the program were given, matinee and evening, which is a pity. But Oakland Ballet will return in late December for seven performances of Nutcracker, Dec. 21-24. I wonder if they will again field some Oakland A's baseball players into the production, as in days of yore.