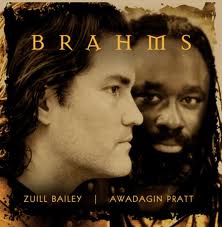 Recording the Brahms cello sonatas presents some logistical challenges, and not only the instrumental balance difficulties both works notoriously present.

There’s also the little problem of what else (if anything) to put on the disc. The two sonatas run shy of an hour, so the temptation to add something is strong, though there are few obvious candidates. I’ve seen Grieg, Schumann, Schubert, a couple lesser contemporaries of Brahms, and so forth.

Of course, there is always more Brahms. A few discs include a transcription of the First Violin Sonata, but there’s general agreement that the arrangement doesn’t work very well. Others have added a clarinetist and squeezed in the late clarinet/cello/piano trio. Now comes a new recording that fills out the space mainly with transcriptions of Brahms songs, and incidentally debuts a promising musical partnership.

Zuill Bailey (read an interview) has been an increasingly prominent presence in the cello world over the last decade, and with his current relationship with the Telarc label that’s likely to continue. His pianist, the 1992 Naumburg Award winner Awadagin Pratt, by contrast, seems to have dropped off the radar, at least so far as the studio is concerned, at just about the time Bailey appeared.

Bailey is a cellist of impressive strength. In the two sonatas, the striking elements are a forte sound of remarkable density and firmness, allied with airy, meltingly sweet (occasionally too sweet) playing in the quietest passages. He has a charming taste in portamento, too, though in a few places he does land fractionally above the note on upward slides.

In the daunting first movement of the F-major Sonata, the natural strenuosity of the music sometimes shades into clumsiness — there is, for example, one odd tempo readjustment in its open paragraphs, though in context it sounds as though it might have been for Pratt’s purposes rather than Bailey’s.

Pratt, for his part, stresses clarity more than depth of tone, and at places the effect is somewhat brittle. Still, clarity in Brahms is no small virtue, and it’s a pleasure (helped by close but attractive recorded sound, with the cello distinctly in front of the piano) to be able to hear everything. In the gentler music, he phrases with affection and delicacy.

The sonatas, though, are only about three-quarters of the contents of the disc, and it was the other quarter that impressed me more. Bailey and Pratt have filled out the recording with arrangements of eight further Brahms works: the early Sonatensatz for violin and piano, and seven songs. The Sonatensatz takes so well to the cello that I wonder why I’ve never heard it transcribed before. (There is a published transcription in print, though Bailey has made his own.) Both the swashbuckling opening music and the soaring lyricism that comes later — in the body of the piece as well as in the trio — suit the instrument very well, and there are none of the vexing balance problems that so often crop up when moving violin music down to the cello register. At a shade over five minutes, it’s on the longish side for an encore, but on the main program of a recital it would be most effective.

The songs span nearly Brahms’ entire song-writing career, from Liebestreu (True love) — the first song he published — to the lovely Wie Melodien zieht es (It flows, like melodies) coming more than three decades later. It’s a fine selection, including a few of the best-known songs, as well as several I’d not encountered before, all of them suited admirably to wordless performance and to Bailey’s uncommonly vocal tone in gentler music.

Lerchengesang (Lark song), which opens the disc, is almost too honeyed for its own good, but Bailey’s gentle sweetness and Pratt’s delicacy make you understand why they chose to put it first, just ahead of the stern E-minor Sonata. And it was charming to end the disc with a wistful, hushed performance of the famous Wiegenlied, otherwise known as “The Brahms Lullaby.” Good night, all.