For those of an eclectic bent, pianist Ivan Ilić’s Friday recital at San Francisco’s Old First Church proved a delight. The program was an adventure in learning as well as a brilliant display of technical prowess, all free of clichés. 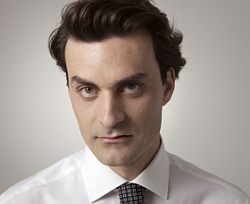 Ilić opened with the West Coast premiere of American Keeril Makan’s Afterglow (2007), following it with six Debussy Préludes and three of the distinctly oddball Studies on the Études of Chopin (Nos. 5, 28, and 44) by Leopold Godowsky, all for the left hand alone. We heard another left-hand piece to open the second half: Brahms’ Fifth Étude, his transcription of Bach’s famous violin Chaconne. Both hands came back into action for Brahms’ Four Ballades, Op. 10, and the program ended with the American premiere of Welsh-Canadian composer John Metcalf’s Endless Song (1999). There was no encore.

Ilić has been gaining an international reputation since finishing his studies at the Paris Conservatory. But he’s a Bay Area native, born in Palo Alto. He first attended UC Berkeley, majoring in music and mathematics. It was a UC fellowship that enabled him to study in France, and indeed, his first recording (of Debussy) was sponsored by the city of Paris.

A Study in Acoustic Residues

Makan, who holds a UC Berkeley composition doctorate, provided the only seriously modern piece of the evening. His Afterglow, written specifically for Ilić, is a sort of Son of Morton Feldman, except that unlike in Feldman, there is a big climax. The work consists largely of evaporating overtones, produced by holding down the sustaining pedal.

Ilić would play repeated individual notes — or a loud chord — and then stop to let the instrument continue sounding. So the audience spent more time listening to notes’ shadows than to notes actually being played. Ilić mentioned that Makan hoped to created a new way of listening, a project that struck me as overblown. Still, this is an interesting and worthy composition that I hope to encounter again.

Ilić was technically flawless, offering lots of color plus an uncommon sensitivity to Debussy’s expressive little tone paintings. Generally, he took excellent tempos, except that the water nymph “Ondine” sounded as though she were in one hell of a hurry. What Ilić did was to sacrifice some of the poetry in the piece for the sake of glimmer.

Godowsky (1870-1938) was a whizbang virtuoso, known for being able to play everything faster and more accurately than anybody. He was not, however, always tasteful in these matters, neither in playing nor in his many transcriptions. When Busoni was asked the difference between a pianola and Godowsky, he famously quipped, “Godowsky can play ten times faster than a pianola, but the pianola has ten times as much feeling.”

That does not mean that his elaborate transcriptions are less than impressive in their inventiveness. In the 44th of the Studies, Godowsky manages Chopin’s “Aeolian Harp” étude using only the left hand, and without loss of the sense or harmony of the original, while also sustaining the whirligig of Chopin’s notes. I must say that Ilić’s performance left me agape. He just tossed off Godowsky’s keyboard torture chamber, and this in a piece most pianists find difficult enough with two hands.

The Bach-Brahms Chaconne never really caught fire, because Ilić played the piece more like Brahms than Bach. That may seem appropriate, but for me it doesn’t quite work. Bach’s works are so strong unto themselves that messing around with them only weakens them. Gary Graffman played this piece last year without using rubato, and the effect was stunning. So it can be made a success if one just lets it be.

Making the Most of a Brahms Quasi-Sonata

Brahms’ early Ballades are rarely programmed complete, as they’re something of a mixed bag. His layout suggests a freestyle sonata. The first two are super, sounding typical of the mature Brahms; the third is a rambunctious scherzo. The quite finale-like fourth piece is of distinctly weaker material. Ilić played them all lovingly, although if my own memory serves me right, I think he suffered a minor memory lapse in that finale. Still, he deserves an “A” for adventure.

Metcalf (born in 1946) is best known for his six operas, which have had performances in the UK as well as Canada and the United States. His Endless Song is a brief Romance-type piece in folksy pastels. Its style was sort of watered-down Vaughan Williams, in both harmony and demeanor. That’s British pastoralism for you, the kind of music Constant Lambert once lampooned as the school of “the cow looking over the fence.”

Ilić, before finishing the program, noted that he thinks Metcalf’s piece is the ideal encore piece, and since it closed his formal program, he did not want to play another. On that dark and stormy Friday night, I think something a little more upbeat would have been appropriate. Still, what the enthusiastic audience did hear was well worth the effort to get there.