Last week’s San Francisco Symphony concert was an instance of Music Director Michael Tilson Thomas’ brilliantly daring programming. It offered three austere works by Stravinsky plus one super beauty by Toru Takemitsu. Alongside the orchestra there was the Symphony Chorus and the world’s leading clarinetist, Richard Stoltzman, who played what amounts to Takemitsu’s clarinet concerto. I don’t believe the music could have been better performed, but Friday’s concert also suffered from a serious case of gab pollution. 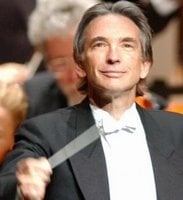 The evening opened with Stravinsky’s Symphonies of Wind Instruments (1920), and the full ballet score for Apollo (1928). (The program decided to forgo the ballet’s original title, Apollo musagète (Apollo, Leader of the Muses), in favor of the more common title.) Following intermission, there was Takemitsu’s Fantasma/Cantos (1991), for clarinet and large orchestra, after which the Chorus joined the program for Stravinsky’s Symphony of Psalms (1930).

Symphonies of Wind Instruments is a tough nut to crack, a work more respected than loved. Scored for an orchestra’s winds and brass alone, it lasts only about eight minutes and has absolutely nothing to do with traditional symphonic form. It is, rather, a kind of variations-rondo on two contrasting ideas.
Not Quite Grade-A
On one hand there is the dominant chant-chorale, vaguely related to Russian Orthodox church music. That is interlaced with little, violent outbreaks, which sound like scraps that fell off the table while Stravinsky was composing The Rite of Spring — the pounding, repeated chords, or that opening, squirreley bit of high bassoon solo, whose timbre resembles nothing so much as a chicken having trouble laying an egg.

If Stravinsky’s memorial to Debussy deserves the term "symphony" at all, it might be in the French Baroque usage, where it meant free-flowing, small movements, as in the Suite de Symphonies by Jean-Joseph Mouret (one of whose movements became the opening theme to television’s Masterpiece Theater.) I consider Symphonies of Wind Instruments one of Stravinsky’s few noble failures.

Having created a reputation as a composer of violent, often savage music, Stravinsky did an about face in the mid-1920s, creating two ultragenteel compositions as mild as melted butter: the Serenade in A Major for piano, in 1925, and the amazing Apollo ballet score. The ballet’s 10 sections present serene beauty that is almost embarrassingly beautiful in places. Scored for string orchestra, Stravinsky’s textural mastery was at its zenith, especially considering that it was his first work for string orchestra. Occasionally, for the sheer naughtiness of it, Stravinsky casts a knowing wink at Tchaikovsky’s or Delibes’ ballet music, but only for a few seconds.

The three-movement Symphony of Psalms is, of course, universally recognized as a major masterpiece. Stravinsky’s choral writing is impeccable here, beautifully suited to voices as few 20th-century choral works are. Besides that, Stravinsky indulged his great contrapuntal skill to the full — a virtue rarely acknowledged by the world. Then, too, there are great themes and motive structures, contradicting the oft-heard slander that Stravinsky couldn’t write good melodies. Once you’ve experienced that final, simple Alleluia motive, it never leaves you. The work is likely the greatest religious choral work this side of the Verdi Requiem.
Sensuous and Sober Masterpiece
Takemitsu's Fantasma/Cantos stems from an interesting programming idea of Stoltzman’s. He wanted to illustrate three centuries of clarinet masterpieces. So he picked (naturally) Mozart’s Clarinet Concerto (1791), Brahms’ Clarinet Quintet (1891), and, to represent 1991, had the BBC commission Takemitsu, who, in his maturity — he was then 60 — was as likely to produce a masterpiece as anyone alive. What emerged was typical of the composer’s orchestral music — extremely sensuous music cast in one movement for a large orchestra playing in slow tempo and predominately soft tones. Takemitsu observed a few traditions, such as the soloist’s cadenza two thirds of the way through the piece’s 18-minute duration.

Stoltzman’s fabled control of dynamics, even in extreme registers, was much in evidence. Nor did he have problems with the newer technical tricks required of the soloist, like blowing harmonics into the instrument, or sounding two or more notes simultaneously. The essence of Fantasma/Cantos is its meditation on clarinet possibilities. It is a truly masterful composition, and it was movingly performed.

But why did the conductor feel the need to sell the music by talking it to death? MTT began with lectures on the first two Stravinsky works, replete with snippets from them played by the orchestra. Before the Takemitsu work, he handed the mike to what seemed like a surprised Stoltzman.

Stoltzman began by trying to be profound, gushing New Age Zen, which provoked laughter from the audience, quieted by an angry glare from the musician. He began again, with the same results, and then a third time, before MTT held up the palm of one hand. With a conductor on the podium, to see is to obey. It was not the best introduction to the soloist.

For those who wanted information, the orchestra’s meaty program booklets contain Michael Steinberg’s or James Keller’s informative, elegantly written essays. An hour before concert time, there was a heavily attended, free lecture, illustrated from the piano by Peter Grunberg. That is the appropriate time for education. As Toscanini once observed of Beethoven’s Eroica Symphony, "Some see a great human struggle, others a giant hero. I see 'Allegro con brio.' " It’s always better to let the music speak for itself, minus hype.