A number of fine Czech string quartets have graced Bay Area concert venues in recent years, but Sunday night marked the first appearance of one of the most venerable, the Talich Quartet, established in Prague in 1964. Its current American tour has been long awaited; in fact, the group had been scheduled to perform at UC Santa Cruz in 2005, but was forced to cancel when the Department of Homeland Security was unable to process its visas in time.
Actually, there have been enough personnel changes over the years that this group might be more aptly named the "New Talich Quartet." But Jan Talich Jr., son of the founding violist, is the current first violinist, and the ensemble has maintained many of the characteristics of the Czech string playing tradition that distinguished its illustrious predecessors. 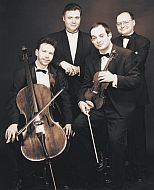 Sunday's program, offered by Music at Kohl Mansion, opened with Mozart's G-Major Quartet, K. 387, from a set of six quartets inspired by and dedicated to Haydn. These are some of Mozart's most sophisticated chamber works, balancing bold dramatic gestures and subtle contrapuntal textures against witty chromatic turns of phrase and surprising offbeat accents. The Talich's performance of the Allegro vivace assai immediately made clear that these performers are capable of intelligent, subtle music making, but did little to dispel my fears that this would be yet another pleasant but tepid interpretation.

Articulations were polished but lacking in crisp edges, and while the players' phrasing was tasteful, little sense of wit or drama was evident. This sense persisted at the beginning of the following Menuetto (which is actually in the character of a scherzo), but upon reachin the trio, the group seemed to find its stride. By the da capo it was clear that it was engaged with the full emotional scope of the work, ranging from sublime contemplation to slapstick comedy.

In fact, the playing in this movement set the tone for the rest of the evening's performance — not flawless, but exceptionally intelligent, imaginative, bold, committed, and, for the most part, highly compelling. The rest of the Mozart was wonderful. I particularly appreciated the fact that the quartet's ornamental passagework sounded improvisatory and that Mozart's playfully eccentric chromatic inflections and accents actually sounded surprising. The players chose a surprisingly quick tempo for the Andante cantabile, but their phrasing was cleverly inflected and quite convincing.

Like Haydn, Mozart had incorporated fugal writing into several of his early quartets. The counterpoint in the rollicking Molto allegro finale of K. 387, however, more directly reflects his reaction to Haydn's recently published Op. 33 quartets, as well as his experience in Baron von Swieten's Viennese salons, which were dedicated to exploring Bach's fugues. The contrapuntal devices and textures here are considerably more varied and sophisticated than in Mozart's earlier works. Modern performances tend to emphasize the difficulty and complexity of the score and as a result often sound forced and overly serious. Happily, the Talich chose to temper its approach with a healthy dose of attention to Mozart's comic textural juxtapositions and quicksilver sense of wit.
Compelling "Kreutzer"
The highlight of the evening was Leoš Janáček's first String Quartet, the "Kreutzer Sonata," a loosely programmatic work meant to evoke the plot lines of Tolstoy's novella of the same name. While Janáček's operas have been recognized as important contributions to the 20th-century repertoire for some time now, his chamber music has only gradually achieved the international recognition it deserves.

Since he was concerned with developing a distinctly Czech (actually Moravian) style, Janáček is often associated with the neoromantic "folk" style of his teacher, Dvořák. Yet much of his work is based on motivic material abstracted from the natural speech rhythms and inflections of his native language, and the resulting structures and textures of his more ambitious works sound surprisingly modern.

Members of the Talich Quartet have clearly spent a large part of their careers engaged with their countryman's music, and it was a rare privilege to be able to share the insights they have gained in the process. This was impressive playing on every count, and was easily the most compelling performance of the quartet that I have been fortunate enough to experience.

Felix Mendelssohn's E-flat Major Quartet, Op. 44, No. 3 rounded out the program. This too was given a bold, committed performance, much of it at pedal-to-the-floor tempos. Unfortunately, this rather breathless approach often led to ideas blurring together, particularly during the quartet's hectic traversal of the Scherzo, which lacked the poise needed to make the most of its quirky rhythmic gestures. Occasional technical problems also cropped up — intonation wavered in the opening Allegro vivace, and the cellist had trouble keeping pace during several of the many virtuosic running passages.

Nonetheless, I applaud the quartet's willingness to take risks, as the performance had an athletic quality that certainly was exciting. The audience responded enthusiastically, and was rewarded with a serene performance of the Cavatina from Beethoven's Op. 130 Quartet as an encore.