Stanford University’s Memorial Church turned into a Byzantine abbey for two hours on Sunday evening, with a concert of medieval Byzantine chant performed by the vocal group Cappella Romana, from Portland, Oregon. 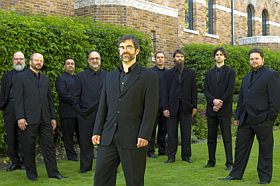 This may not have been quite the religious music that Jane Stanford had in mind when she had the church built, but it was a perfect venue both acoustically and visually.

Contemplative spiritual music always sounds best in a hall with a long reverberation time, where the listener can become immersed in the echoing sound; and the more than slightly ornate religious decorations around the church’s cavernous space make a passable substitute for Hagia Sophia in Istanbul. In fact, Alexander Lingas, Cappella Romana’s artistic director, suggested in a preconcert talk that this music served as the aural equivalent of an icon — a focus for prayer operating through its own artistic intensity, and not merely as a function of the subject depicted in the painting or in the words.

The texts for this program (all of them in Greek) and most of their musical settings come from manuscripts at Grottaferrata, a monastery near Rome founded in the 10th century at a time when the Byzantine Empire controlled much of Italy. Grottaferrata is still active, celebrating Roman Catholic services in the Byzantine Rite. The concert’s first half consisted of hymns honoring the monastery’s founders; the second half drew from the services for Pentecost.

As something of a philistine where a cappella religious music is concerned — “if you’ve heard one Gregorian chant, you’ve heard them all” — I was unexpectedly delighted not only with the musical interest but also with the variety in this Byzantine program. Some of the texts were given plain syllabic settings; others had extensive melisma, with one syllable held over as many as a dozen elaborate notes, sometimes with trills and arpeggios added.

Several of the pieces — especially the works called Odes — were monophonic, sung in unison, given variety by having the verses alternate between tenors, basses, and tutti. Other pieces had harmonies in parallel motion. But most often a soloist or a group of singers would give a principal line over a drone from the rest. Some of these drones were long pedal points; others moved up and down quickly, the drone singers holding a syllable for the length of the soloist’s melisma on that syllable. A few of the pieces were all in one style, while others shifted over their course.

Voices to the ForeCappella Romana performs often in the Pacific Northwest, its home territory. It’s a professional chorus and not a monastic outreach project, though a couple of the nine men in plain black clothing had long beards worthy of the popular image of Byzantine monks. As a chorus, the group blends excellently, with just the slightest reedy tone. The voices of the individual singers emerged only for their solos, and they showed individual character. John Michael Boyer has a hearty and straightforward style, and found an almost 18th-century grace in his cadences. Stelios Kontakiotis, by contrast, gave a sinuous curve to his elaborate, melodically bent lines. Mark Powell sang similar material, offering it in a lighter, plainer style. Constantine Kokenes delivered a brief but striking solo in the final antiphon, revealing a resonant, echoing bass voice.

Not only were the voices clear and marvelously robust, the enunciation was clear and precise even in the reverberating acoustics. During the plain syllabic singing I had no trouble following the Greek texts in the program book, which I had not expected to be able to do.

So there you have it. Nine men and their voices, no instruments but a pitch pipe (inaudible from the audience), the rich religious decorations of Memorial Church and music to match it. Throughout the evening the human breath conveyed the human spirit — indeed, in ancient Greek they’re the same word, πνεύμα — and the artistic impulse of religion in music was carried through on the reverberant acoustics, even to a secular audience.