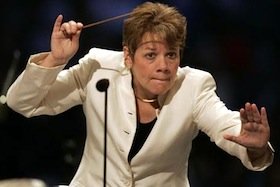 In its final program of the season, the Cabrillo Festival continued to surprise, delight, and occasionally frustrate. The rewards and risks of delving entirely into the new were very much on display for the festival’s concert on Sunday, when the players relocated for their annual performance at Mission San Juan Bautista. Marin Alsop’s celebration of her 20th year at the helm of the festival exhibited the brilliant and incisive conducting we’ve come to expect, and the players again displayed a remarkable mastery of a huge amount of new music. The featured composers brought forth a range of works that varied from chillingly brilliant to unmemorable.

While the full orchestra sounded wonderful in the Mission’s space and was frequently spectacular, the most affecting moments came when the ensemble reduced down to a small string orchestra to perform Anna Clyne’s Within Her Arms. Written in 2009 in remembrance of this young British-American composer’s mother, with its title drawn from a poem by the Vietnamese Zen teacher Thich Nhat Hanh, this work exerted an emotional pull from its opening gestures that steadily intensified through an exquisite performance. Clyne built much of the work with close imitative writing between the players, at times concentrating their lines so that they became almost blurry echoes of each other. The writing recalled Renaissance counterpoint at times, and though medieval and Renaissance allusions have become a cliche of new music, this writing felt vital and new, both mournful and filled with life. As an elegiac work for strings, Within Her Arms brought to mind Barber’s Adagio at times, and it shares with that piece a perfectly sculpted tension, a somber beauty, and an inner radiance.

Anna Clyne’s Within Her Arms has a perfectly sculpted tension, a somber beauty, and an inner radiance. The veteran Texas-based composer and conductor Dan Welcher has amassed a significant catalogue of orchestral works, and that experience was much in evidence in his Bright Wings: A Valediction. This was Welcher’s first Cabrillo performance, but this 1996 work seemed made for Alsop and her skillful players. Plenty of color and drama are evident from the work’s piercing opening unisons, which give way to complex, interwoven lines and some striking combinations of low brass and percussion. Thick textures ensue yet the lines remain utterly clear and yielded to a haunting piccolo solo over transparent textures before a driving conclusion.

Pierre Jalbert’s 2007 work Fire and Ice brought the program to a riveting finale, highlighting the players’ brilliance. The opening “Ice” movement is built largely on the interplay between the frequently bowed percussion and other sections of the orchestra, especially the high strings. This approach builds momentum before the music grows denser and darker, setting the stage for the release of the concluding movement. The “Fire” half of the work lives up to its title, with jagged rhythms, collective virtuosity in the orchestra, and sharply controlled harmonic and rhythmic tension. Jalbert pulls off the feat of creating a work that is both a showpiece and a work of substance, with intricate lines, inventive orchestration, and a compelling dramatic arc.

The excessive sweetness of the orchestra’s part drained Chiayu’s Xuan Zang of the vigor established by the soloist. The festival has commissioned five short works, “nightcaps,” in honor of Alsop’s anniversary, and this program included the final premiere among them, Avner Dorman’s Reflections. This is a pretty piece whose layers recall Baroque counterpoint in an immediately pleasing way. On first hearing, there didn’t seem to be a great deal beneath the surface, but it suited its purpose in evoking a sense of occasion, fitting well into its program-opening slot.

The program was rounded out by the young Taiwanese composer Chiayu’s Xuan Zang, a one-movement concerto for horn, here given its premiere. Alsop has been nurturing this composer’s career since she participated in the Cabrillo Composers Workshop five years ago, and her ongoing performances of Chiayu’s works since then epitomize the dedication she has shown to so many composers. 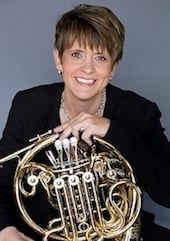 The work itself is meant to be a musical travelogue of sorts, depicting episodes from the 19-year journey through Asia chronicled by the Tang Dynasty Chinese monk Xuan Zang. Chiayu wisely chose to evoke just a few scenes from these travels, with the episodic premise serving to delineate sections and transitions in the music. The strongest writing here was for the solo horn, all very idiomatic and expressive and shaped with care and beauty by soloist Kristin Jurkscheit, the orchestra’s principal horn player. The orchestral writing, though, seemed to turn the church’s altar into a Hollywood soundstage, and I found myself imagining a Disney adventure more than a monk’s journey through a distant past. Chiayu revealed an impressive degree of skill as an orchestrator, but the excessive sweetness of the orchestra’s part drained the work of the vigor established by the soloist.