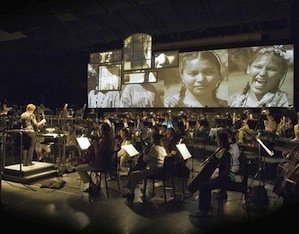 Many NPR programs have made the jump from the airwaves to center stage in order to gain attention and grow an audience. In the case of Hidden World of Girls: Stories for Orchestra, which kicked off the 50th anniversary season of the Cabrillo Festival of Contemporary Music, the theatrical leap was managed with grace, earnestness, humility, and an eye to making fully-realized art.

Based on the eponymous NPR series by Davia Nelson and Nikki Silva (known as The Kitchen Sisters), The Hidden World of Girls chronicles the stories of female trailblazers and unlikely heroes, through the interweaving of spoken-word radio stories, live orchestral accompaniment, and visual projections.

This ambitious world premiere, commissioned by the Cabrillo Festival, was three years in the making and the largest commissioned project in the festival’s history to date.

The concert’s ultimate goal was to create a work that bridged divided communities, engaged curiosity and conversation, and addressed issues sometimes difficult to broach, all while attempting to explore the complex and shifting ways we experience contemporary culture through media. That’s a tall order and one that inevitably fell short because of the interpretive demands the material makes on artists and audiences alike.

The bulk of the evening was scored by Laura Karpman, the project’s creative director and lead composer. In building out a team for the project, Karpman invited young composers Alexandra du Bois, Clarice Assad, and Nora Kroll-Rosenbaum to contribute compositions in response to stories featured throughout the night. The resulting performance was a compelling, perplexing, and, at times, anxious tapestry of competing sonic voices.

In Beneath Boundaries, for example, Alexandra du Bois explored the work of Iranian photographer Shadi Ghadirian. Ghadirian combines and juxtaposes traditional and modern images, as a means of reflecting the complexity of her culture’s gender norms. Du Bois’ work, while at times lush and moving, drowned out these statements in favor of her own opinions. Surging percussive lines, restrained strings, and declarative brass stretched the subject of gender identity beyond contemporary art and into overt social critique.

The night belonged to Karpman, whose brilliant underscoring showed her cinematic chops through and through

The resulting composition was an audacious political statement on the plight of Middle Eastern women (without use of Middle Eastern instruments or non-Western chords) but ultimately pitied a culture whose customs, while seemingly oppressive, can also be quite empowering.

Clarice Assad, a festival participant in 2004 and daughter of famous Brazilian guitarist Sergio Assad, also skirted the line of editorial overstep in subverting the hidden story of her subject. Her piece, The Disappeared was by turns contemplative and an instrumentally- explosive, sardonic jaunt that made general statements against authoritarianism rather than conversing directly with its source material — the story of Claudia and Patricia Bernardi. Assad’s work hinged on a circus theme, making for vivid and delightfully expressive moments. But many dictatorial regimes under the gun, and even unfavorable candidates in democratic societies, have been painted as clownish and pompous. Lacking specificity, the music could apply equally well in other situations — to both its benefit and detriment. 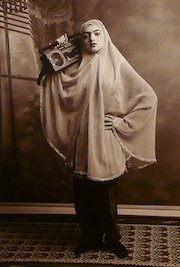 Projected visuals were equally misplaced during the performance. Photos and video had been collected by The Kitchen Sisters and redesigned for the concert by Obscura Digital (the design team behind the YouTube Symphony). Viewing these materials on-screen was difficult due to an obstruction caused by a large window-like installation hanging above the orchestra in front of the screen. Not only was the installation distracting, but when the photos and video were displayed in and through the installation, they were imbued with unintentional meanings. The work of photographer Deborah Luster, for example, is praised for its vulnerability, humanity, and character insight, but came off caged and calloused, which is certainly unintended, as Luster herself was shooting these photos within a Louisiana prison.

Hidden World thrived when some media kowtowed to others to reveal the source and create hidden stories. Double Adventures, music by Nora Kroll-Rosenbaum, was masterfully balanced in this regard. Charming, whimsical, and not too ostentatious, this piece about childhood sci-fi fantasies was one of the successes of the evening.

The night, however, belonged to Karpman, whose brilliant underscoring showed her cinematic chops through and through. Karpman is a true craftswoman, whose sensibilities in, and understanding of, multimedia served to uncover new emotional dimensions. Her compositions were bold and self-assured.

The faults of this program — its competing voices, its many distractions, its missing the mark in spite of heavy responsibilities — are the very issues facing feminism itself, but they ultimately distract from the potency of this program, which is its ability to take on the typically male-dominated world of symphonic music and create art and advocacy with reckless aplomb and fearless celebration. The risk-taking was commendable, and the rewards the concert gave were many.

In Hidden World, the artists not only advance the medium of storytelling, but mold advocacy in an altogether new and artistic direction. It may not be a Helen Reddy tune, but the evening reminded us of the secret worlds we have already conquered and the many exciting paths we have yet to forge.