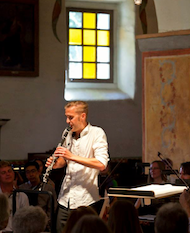 The final program in this year’s Cabrillo Festival of Contemporary Music seemed designed to prove that modernism, the ethos that dominated classical music in the early- and mid- 20th century, is not only alive and well, it’s kicking and bawling lustily. I heard Sunday afternoon’s performance at Mission San Juan Bautista, conducted by Brad Lubman in the absence of recuperating Music Director Marin Alsop, and it was a stunner.

None of the three works on the program, all single movements between 10 and 25 minutes long, were ingratiating or tuneful. What they all were was interesting and exciting, and above all powerful. They had the weight of their utterances. There was no note-spinning or marking time in this concert. The composers had something to say at the length at which they said it.

The oldest composer was the most succinct. Pulitzer Prize winner George Walker was a mere 90 when he composed his Sinfonia No. 4 “Strands” last year. Like other recent Walker pieces — he’s still a busily active composer — it’s a heavy, brassy, highly condensed work that packs a strong punch. Series of thick chords alternate with a striving string theme and staccato passages for brass and pizzicato strings.

The Clarinet Concerto of the Finnish composer Magnus Lindberg has become something of a regular repertoire item over the decade since its composition. This performance was completely owned by its soloist, a lanky 30-year-old Swede named Emil Jonason. Like many virtuoso concertos, Lindberg’s is designed to demonstrate the soloist’s virtuosity by requiring sounds that can be ugly or grotesque, a prospect which its dedicatee, Kari Kriikku, embraced with vigor. 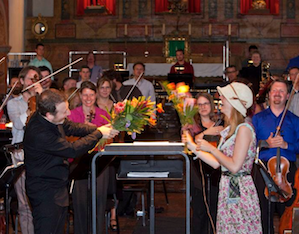 Jonason subverted that. He eschewed screeches and honks. From the opening solo melody, which came out almost beautifully – a real shock in an older Lindberg piece – Jonason gave out the most graceful tones possible. Even his piercing high notes were sweet, and the delicacy with which he would fade out for the orchestra’s turn was sublime. He gave more emphasis to flutter-tongue passages than to bent notes or glissandos.

After vigorous applause, Jonason favored the audience with an encore, which he described as “a bit of Tom Waits — Swedish style.” Here he indulged in the glissandos that had not so much marked the concerto, and he added some percussion in the form of tapping his shoe on the adobe floor.

Lubman invited Anna Clyne to the podium to say a few prefatory words about her composition, Night Ferry, written for the Chicago Symphony last year. Clyne is a slender English woman in her early 30s, with a summer dress and a straw hat. Her appearance deserves mention only to emphasize the applause due her for so completely subverted stereotypes once the music began. This is a turbulent, dark, threatening work of enormous heft, despite its relative brevity. It’s some of the most effectively stormy music I have ever heard. The sound was huge. Heavy drums parked in both side aisles of the church contributed an antiphonal effect. 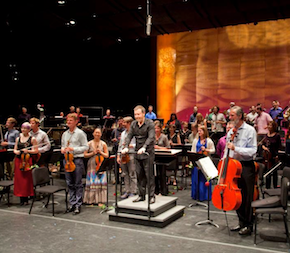 Despite its violence and vehemence, Night Ferry is built on a far clearer consonant base than either of the other compositions. As a result, the churning strings and curving winds, the sheer sweep of the thing, reminded me to a certain degree of Sibelius, certainly far more than his fellow Finn Lindberg did. The main difference is that Clyne’s music is more energetic, or — more precisely — more restless than Sibelius’. Clyne says she was inspired by listening to Schubert, and something of the dramatic air and structural pattern of the “Unfinished” Symphony may also be heard here.

The storm that dominates the piece alternates with brief, tentative, even ominous reposes into repeating motives in the winds. After the last storm scene — which, with its rumblings in the cellos overlaid by long horn notes blowing, and similarly long held whistles in the winds, sounds more like a train — the gentler repeating wind motives finally take over entirely, become more restful, overcome one last distant rumble from the storm, as at the same point in Beethoven’s “Pastorale” Symphony, and bring the music to a quick and satisfying close.

Of course, nobody can say whether either Clyne’s or Walker’s work will stay the course. All I can say is that it was impressive to hear them once, and to add that Lindberg’s concerto, the older and more familiar work, sounds better every time I hear it, certainly this time. Lubman’s energetic conducting — he leads with broad gestures, often more built on events in the music than on time-keeping — and the fierce commitment of the Cabrillo Festival Orchestra certainly helped. So did the mission’s deep, overloaded acoustics, which emphasized the strength of all three works. The benches are uncomfortable, yet for once I hardly cared. This may have been a better venue for such a concert than the Santa Cruz Civic Auditorium would have been.