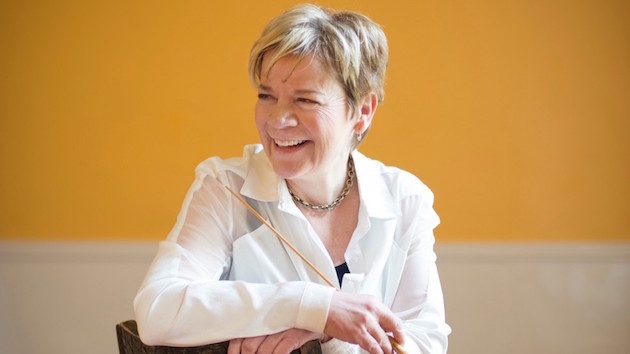 Ah, to see her conduct again! I’ve grown so accustomed to her pace. Like breathing out and ... Wait a minute! After 25 years of our mutual attendance, last Friday was the first of the last Cabrillo Festival of Contemporary Music concerts under Music Director Marin Alsop. It was yet another set of intriguing, recent works by living orchestral composers, enthusiastically received by a packed house at Santa Cruz’s Civic Auditorium. The concert’s success was no surprise, yet frightening in its proximity to the change looming on the horizon. Alsop’s successor will have enormous shoes to fill.

“Power and Devotion” was the marketing title for Friday’s concert, but it really had little to do with the music. Not with everyone’s mind attuned to the power of the Alsop’s achievements and to her devotion to her orchestra and composers. Never mind. What did we hear despite the title?

Two works by Christopher Rouse engaged the audience up to intermission — his nine-minute Thunderstuck (spelled without an r) (2014) and his Oboe Concerto (2004). Rouse is one of the country’s most celebrated composers, “one of the few whose music will last,” according to composer John Adams. Shamefully, the San Francisco Symphony has managed to squeeze in only two of his works over the decades of his national prominence. Meanwhile, the Cabrillo has performed 22.

Rouse says “a little more ‘fun’ at classical music concerts would be all to the good,” and that Thunderstuck “is a love letter to the exuberance and inventiveness” of rock music from the mid-1960s to the 1970s, especially Jay Ferguson’s 1978 hit “Thunder Island.” It’s a jaunty number comprising many riffs strung together with a slower, almost hymn-like section in the middle. Sandpaper and banged chimes add life to a relatively subdued percussion section compared to some other of the composer’s works. Nothing heavy metal here, just a series of engaging moments that grow on the listener with repeated listenings. For a more extended experience in this milieu, the reader should check out Hayden Wayne’s Funk Symphony. 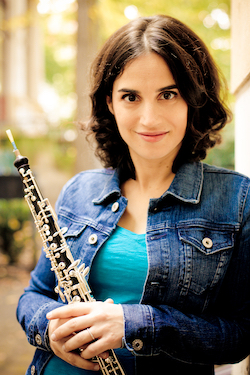 Rouse himself introduced his concerto by revealing that unlike the “fangs-bared” quality of some of his aggressive works, he wanted to write a pleasant piece that took advantage of the agility of the oboe. These aims were achieved in spades over the 26-minute course of the music, played as a single movement in three sections. The music alternated between sequences of animatedly virtuosic passages punctuated with catchy orchestral flourishes alternating with slower, soaringly rhapsodic, near-Eastern-sounding melismas accompanied by harp and celeste. I would rank this work as one of Rouse’s most beautiful creations, along with his flute concerto and Kabir Padavali for soprano and orchestra. The audience admired it as well, with a whooping standing ovation for the composer and the superb soloist, Katherine Needleman.

Following intermission came one of James MacMillan’s most effective shorter works, The Death of Oscar (2012). The Oscar in question is not a statuette, but a fictitious character, the son of Ossian, a Scottish pseudo-Homer fabricated by the poet James MacPherson (1736-1796). After learning of Scottish sculptor Alexander Stoddart’s plans to carve a massive neoclassical sculpture depicting Oscar’s death following his victorious, fatal combat with King Cairbre, MacMillan was inspired to depict the duel in his 13-minute symphonic poem. Low horn grumbles segue into sweet violins and harp with Scottish snaps at the beginning. About five minutes in, the battle is announced by thrilling, Baroque-sounding trumpets. Chimes are belted during the helter-skelter combat proper, followed by a plangent English horn lament. A crowd-pleaser, Oscar should be giving the late Peter Maxwell Davies’ Orkney Wedding a run for its money.

... an opportunity to process the immense feelings generated by the chaos and destruction that is so prevalent in the world today — both in barbaric human behavior and in the alarming state of our global climate and natural environment. Through this symphonic ballet we also hope to discover a moment of peace and resolve.

The six members of the appropriately named Hysterica Dance Company processed the ballet’s immensities on a narrow platform built in front of the orchestra as well as utilizing most of the aisles and staircases of the auditorium. Their movements were visceral and anguished. Meanwhile, dull orange projections of a seemingly dying sun in a polluted atmosphere did little to set the scene. The three sections, Dust, Water, and Space seemed fairly indistinguishable from the gestural standpoint over the 20-minute duration of the work, but there was plenty of variety in the music, despite its minimalist antecedents. The moment of peace and resolve seemed to be signaled by a peculiar yet memorable melody that sounded like the theme to Mendelssohn’s Fingal’s Cave overture with a Bach prelude tacked onto the end. A brisk conclusion followed. Again the audience was well pleased.

There is one more week to breathe out and in. Then I’ll hold it till the next music director is announced. 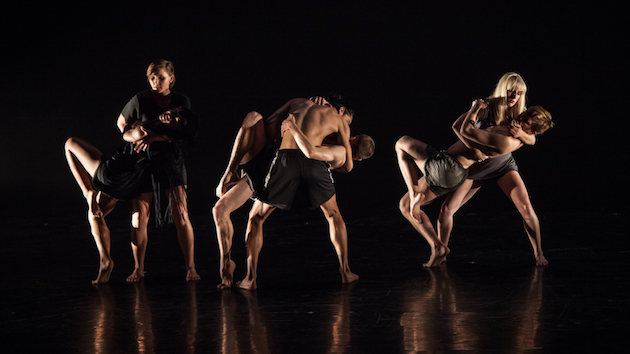