To be a Deadhead is to be a part of a unique, dedicated, and endlessly enthusiastic bunch. Tie-dye is always a dead giveaway (pun intended), as are long hair and/or headbands, flowers, hemp clothing, and equal parts intense, interactive listening for what goes on onstage and the ability to be lost in the moment with comrades down on the floor.I can think of no other group of fans, groupies, or disciples whose reputation completely precedes them, a 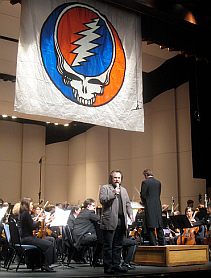 reputation that is known not only throughout their country of origin but also worldwide.

Now, imagine Deadheads not just in the crowd but also on stage, about 70 of them, fitting the full Deadhead description, wielding orchestral instruments. Imagine a Deadhead conductor, and, if possible, a Deadhead composer who wrote a symphony for said ensemble. For the grossly uninitiated like me, it would seem as though that’s what took place Sunday night in Santa Cruz, in the charming Civic Auditorium under the auspices of the Cabrillo Festival of Contemporary Music.

In fact, the composer of Dead Symphony No. 6 (2006), Lee Johnson, who was in attendance, does not consider himself a Deadhead at all. The internationally renowned conductor Marin Alsop, who vibrantly led the Cabrillo Festival Orchestra through the two selections on the evening’s program, has never, to the best of my knowledge, publicly proclaimed that she ever followed The Dead. What was clear is that, though the concert was billed as an orchestral tribute to the Grateful Dead, it was more a tribute to the community that is the Grateful Dead. This was a tribute to the huge collective outside of the immediate band members that, since its early days, has followed, supported, and made recordings of the band in vast legions.

But why pay tribute with a symphony? Surely, to imitate amplified electric guitars, keyboards, and drums with the far more reticent acoustics of orchestral instruments is an exercise that no audience would willingly pay money for. With the sonic profile of the band members’ instruments, not to mention their voices — the most idiosyncratic sounds of all — as the defining element of the Dead in collective memory, to orchestrate their music is to distance oneself from, perhaps even extract, that which is fundamental to the group to which homage is being paid.

Why a Symphony?Of course, we knew this, going into the concert in the first place. And, of course, Johnson is banking on the fact that we know this. Symphonies are not, after all, a haphazard enterprise; a symphony is a calculation. More so, the symphonic orchestra is just as much a statement about musical tradition as it is a convention. The effect of orchestrating music so intrinsic to a rock/jam-band ensemble (or, in the case of the first composition in the program, Matthew Hindson’s ambitious Rave-Elation (Schindowski Mix) [1997/2003], so called after rave/electronic music, a DJ’s sound system) is striking and immediately conjures up the inevitable question “Why?” It is the “why” that makes us want to see how the calculation turns out.

Johnson was after something different, and he is fully aware of the connotations of titling a work “symphony." This was made clear after the concert by the composer, who explained that a symphony is “the grand expression of our [musical] culture and many other cultures,” and that “to a composer [the symphony] is not only the top of the mountain but also a mountain underneath”). It’s indisputable that certain symphonic works remain our cultural touchstones. Thus, the answer to our earlier question: “why?” is that in Dead Symphony No. 6, Johnson wants to make a classic out of a classic.

The symphony is in 12 movements, 10 of which are actual Grateful Dead song titles. The work as a whole achieves a jam-session effect by surfacing and resurfacing motifs. The most notable, particularly for a noninitiate like me, is “Funiculì, Funiculà,” which appears in the first movement, “Dead Overture,” and again in the final one, “Dead Finale.” We learned after the performance that the Dead would often warm up with that popular Italian tune, and Johnson’s incorporation of the ditty demonstrates not necessarily a re-creation of the band on stage but, instead, the capturing — the classicizing — of an aspect of its musical performance.

Like a good jam-band, the references and musical quips were obvious but not meretriciously presented. The audience was often in on the joke, and chuckles could be heard on the floor as these recognizable motifs buoyed over the undulations of orchestral texture. The Cabrillo Festival Orchestra played enthusiastically and reached lovely moments, notably in the eighth movement, “If I Had a World to Give,” featuring a tender string quartet.

Yet audience reactions to the tribute were notably mixed. Some listeners unabashedly praised Johnson’s work, while others appeared miffed, perhaps even critical of the composer’s calculations. But this is the virtue of contemporary music: the impetus it gives listeners to experience and either accept or reject music that has not yet become history. This is the dialogue that exists between composers, musicians, ensembles, and audiences. And this is something that all Deadheads already know.