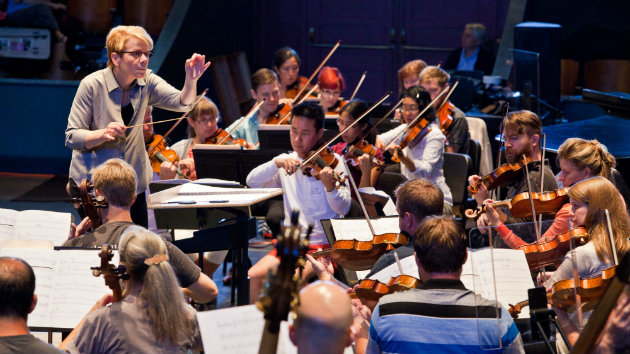 The Cabrillo Festival of Contemporary Music is renowned for programming exciting new works, but the program on Saturday, August 15, at the Santa Cruz Civic Auditorium was uninspiring. Philip Glass’ tedious Double Concerto for Violin and Cello rounded out the evening of works by four composers under 35 (Missy Mazzoli, Nico Muhly, Sean Shepherd, and Hannah Lash), half of whom lacked the ambition and scale one would expect to see at a major festival.

Namely, Lash’s Cabrillo Festival commission Eating Flowers is stylistically indebted to the 19th century, but considering that she cites the lush orchestrations of Debussy and Ravel among her inspiration, surprisingly little of interest occurs in her scoring. The piece has no shortage of beautiful moments (memorably, a violin line unfurls like a blooming flower), but it’s lacking in both cohesion and point of view. Lack of cohesion also plagues Shepherd’s Blue Blazes (2012), a quirky and angular piece that received its West Coast premiere. The composer explained that “blue” refers to the fires of hell, boats bobbing on the Mediterranean, and jazz — a deluge of material for an eight-minute piece.

In fact, both of these composers struggled to say much at all, a problem common in works shorter than 10 minutes. Unfortunately, brevity is only one among many issues with which emerging composers must contend: they must also write pieces that can be learned in as few rehearsals as possible and that can appeal to large and diverse audiences. It’s not hard to understand why Lash and Shepherd create their most profound statements for other media, and these orchestral works aren’t fully representative of their compositional skills. The work, written for the Detroit Symphony and inspired by a 1927 photograph of the Ford River Rouge plant, displays a love for the city that is refreshing in an age that seems to take voyeuristic pleasure in its deterioration.

If less adventurous than her work with her ensemble, Victoire, Mazzoli’s River Rouge Transfiguration (2013) is a compelling and focused piece. The work, written for the Detroit Symphony and inspired by a 1927 photograph of the Ford River Rouge plant, displays a love for the city that is refreshing in an age that seems to take voyeuristic pleasure in its deterioration. Mazzoli conveys the busyness and sheer scale of an industrial plant, manipulating the orchestra with a nuanced hand. She attended the Cabrillo Festival Composers Workshop in 2007, but returns to the festival as a consummate professional — “She’s back as a grownup,” Marin Alsop, who conducted, quipped.

The other highlight was the West Coast premiere of Muhly’s Wish You Were Here (2007), which pays homage to the gamelan studies of Colin McPhee in addition to drawing inspiration from the illustrations of Carl Barks and Hergé. The composer described the work as creating “cartoonish energy mixed with deep, deep loneliness”; indeed, the piece’s driving rhythms and soaring string lines evoke Hergé’s famous comic strip creation Tintin and his fantastical voyages to the Arctic and to the moon, even while its sparser passages convey isolation. Muhly subtly draws upon percussive gamelan patterns, devising a multifaceted orchestral palette that recalls Aaron Jay Kernis, the film scores of Joe Hisaishi, and much more. He is the most well-known of the four younger composers, and the piece proved an excellent fit for Cabrillo.

Listening to Glass’ Double Concerto, it’s difficult to remember that Muhly worked under him, and not the other way around. The piece, which could be much shorter, displays all the hallmarks of Glass’ style: arpeggios over predictably shifting meters, 3 against 2, and such unyielding G minor that the introduction of a new chord feels like a long-awaited gift. Violinist Tim Fain and cellist Matt Haimovitz formed an expressive duet, and Fain’s sound was deliciously dark, but both soloists were often lost to the orchestra.

Indeed, the hall — which is due for renovations — leaves much to be desired, and the setup likely contributed to the flabbiness of the wind and brass playing, which was chronically behind the beat in the concerto. Alsop conducted with precision and artistry, achieving good response from the strings throughout the evening, particularly in the Mazzoli.