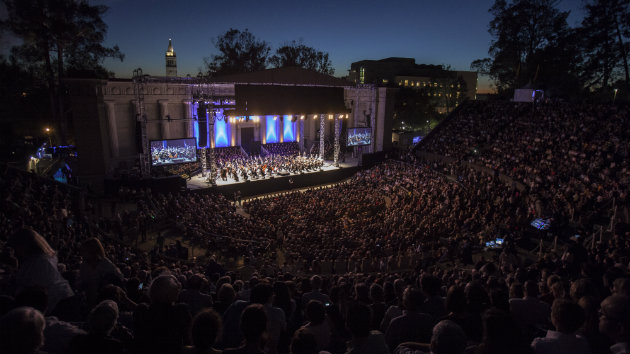 Beethoven’s Ninth Symphony is one of the holiest of holies in music. It represents the composer's credo- the unity of mankind achieved through the joy of music. Because of its length and the vocal demands it makes on the soloists in its choral last movement, it stands apart from his other symphonies in the demands it makes on performers and listeners alike.

Perhaps inspired by the residency of charismatic conductor Gustavo Dudamel directing the Simón Bolívar Symphony Orchestra of Venezuela, Cal Performances went all out in presenting the symphony at the Greek Theater in Berkeley on September 25. The result was little short of stupendous.

The first movement is celebrated for its quiet beginning, which leads to a fortissimo cadence in D Minor. But much of the movement is flowing and graceful. These young musicians knew how to let the music dance. There were moments of conflict for sure, but somehow, you knew that the storms and stresses would soon become memories.

The scherzo was far more delightful and witty than I could remember it ever sounding, and you could feel the packed stadium moving in waves as they listened to Beethoven lob a touchdown pass from the timpani to the first violins. The trio section, in the major key, was like a celebration that the brief return to the minor couldn't quite extinguish.

The joy was evident in the interactions between the conductor and the musicians under his baton. When you see photographs of Dudamel, he often seems to be a coil of energy, crouching before his orchestra, not submissively, but in order to look up at them. This produces the opposite of a sense of domination, and all the way from the back row of the far bleachers you could see looks of complicity from the musicians that said, “it doesn't get better than this, does it?” We all seemed to be drawing closer together as we heard this divine music 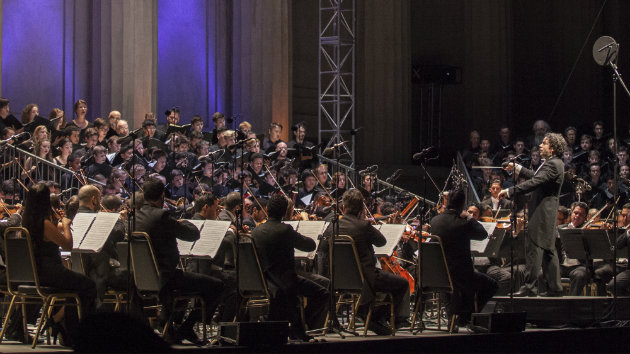 Outdoor concerts have two major drawbacks: the weather and noise. But it was a perfect evening for music at the Greek. You didn't need to imagine the breezes wafting through the string section as you listened. You felt them. Beethoven's great slow movement, surely one of the most songful in his entire output, mostly benefited from the sound system, along with the two large video monitors that allowed the audience to appreciate the wonderful rapport between the conductor and the orchestra as well as the chorus, which truly reflected the joy that Beethoven wanted to evoke in the listeners.

When the crickets began singing, I thought, “Beethoven's love of nature would have welcomed this, too.” They became part of a floating baton that coaxed the magical sounds from the players. This must have been what inspired the 10-year-old girl sitting next to me to also begin to move her arms in time to the music. Considering that this was the mission of the whole festival — to involve young people in great music — it seemed to be getting through.

The only snafu was a fortissimo moment of major feedback that came like a bolt of lightning from the speakers during a quiet passage. This would have destroyed any other performance and sent the audience toward the exit. But all cares were quickly forgotten as the great choral finale got underway and won us over. The marvelous UC Berkeley Chamber Chorus, as well as Pacific Boychoir Academy, and San Francisco Girls Chorus, surely marveled at this unique orchestra, comprised of young people who had grown up playing together over decades and, so I am told, give each other thumbs-up (in rehearsals) when things go especially well. They sang as if they had become one with their Venezuelan counterparts and had worked with them all their lives. The soloists managed Beethoven's Olympian demands and reached out to us in the far reaches of the stadium making the huge space seem intimate.