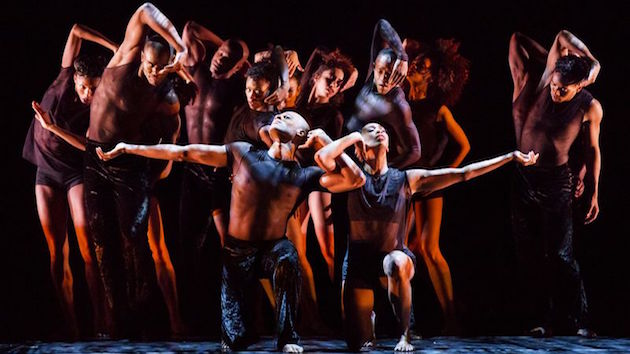 By the time you read this, the Alvin Ailey American Dance Theater will be on to its next gig, having spent last week delighting audiences at Zellerbach Hall under the aegis of Cal Performances. Don’t worry; they’ll be back. The company has had a long relationship with UC Berkeley in performances, Ailey camps to reach out to young people, classes with Cal students and, of course, shows like the final one of the visit, Sunday afternoon. Reprising its opening night, the troupe, under the artistic direction of Robert Battle, who succeeded Judith Jamison in 2011, gave West Coast premieres of two significant (and significantly long) works, Italian choreographer Mauro Bigonzetti’s Deep and Swedish dancemaker Johan Inger’s Walking Mad. 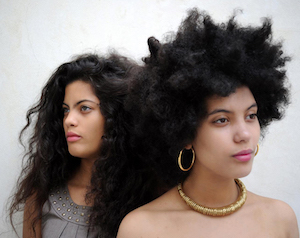 The Bigonzetti looks at first like a dreary piece indeed. It emerges out of a darkened stage with three women in black leotards making stylized staccato gestures before moving on to place the three women in a weird irregularly spaced row. The music is by Ibeyi, or “twins” in Yoruba, twins from Cuba who sing and drum, owing their vocabularies to a mixture of French and Cuban in addition to African rhythms. Their varied songs, thankfully, lead here to some amazing dances, serving as a terrific introduction to the Ailey company circa 2017. The women are joined by men and as the circle expands to include most of the troupe; the moods and tempi vary widely, but largely center on sharp, staccato measures and moves. Obvious in every song is the virtuosity of each dancer, as well as their esprit and unity as a whole. Ailey, for all its tuneful bonhomie, is about stretching the cast to its physical limit. Extensions go on forever, stamina is unbroken, bends of the knees are strong and steady, arms reach not only out to the wings, but into the heart.

Forty minutes long, Deep sometimes acknowledges its cool and refreshing Caribbean impulses with rippling arms and floating steps, but its depths seem mostly to be about the immeasurable subtleties of human connection. 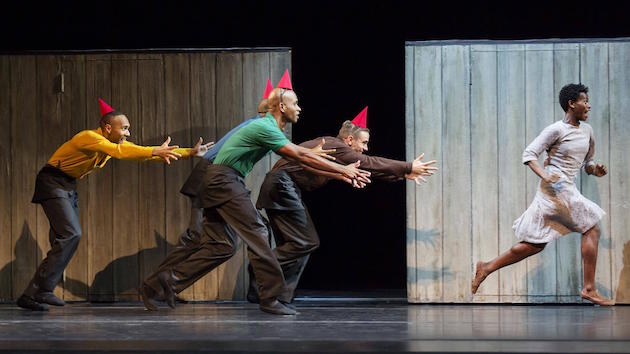 Johan Inger’s Walking Mad is a tricky piece indeed. Set to (spoiler alert) Ravel’s Bolero (mostly) and giving way to Arvo Pärt’s languorous Für Alina, it’s cynical, then funny, then scary, then scarier, then conciliatory. It seems to be, no is, about the war and the peace between men and women. Women are on top; women are terrified. Men are watchful; men are competitive. Men and women make their way into some kind of moderately happy standoff. All this kaleidoscopic transitioning is accompanied by body slams into fences, materializations and vanishings through secret doors, disappearances over aforementioned fences, dancers in pointy little red party hats, moves that include taking off all-concealing trench coats and twirling them like burlesque artists, and women who give men at least as good as they got. And more. You never know who’s in danger, who will be the successful defender, who may become the aggressor. In fact the Arvo Pärt pas de deux at the end is interesting and beautifully executed, but quite beside the point. The contrast of Bolero’s gathering intensity and the choreography’s unfolding ambiguity was in itself terrifically eloquent.

The brief and definitive knockout Ella, choreographed by artistic director Battle in 2008, occasions marveling both at the vocals, which consists of incredible scatting from Ella Fitzgerald encompassing a brilliant range of standards and kitsch, from the American songbook to Davey Crockett to animated cartoons. From the duo that danced it, Sunday afternoon Samantha Figgins and Chalvar Monteiro in spangled black pantsuits, nothing more could possibly be asked. Their Ella is a tour de force, marked by percussive steps, knee drops, spins, mime, syncopated arms, unquestioning unity. When they lie on the floor at the end, there can be no doubting why. 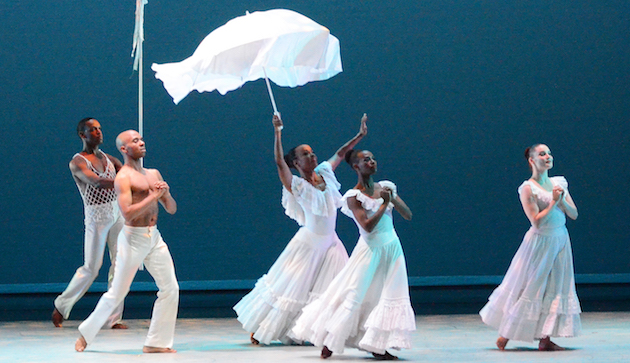 Founder Alvin Ailey’s 1960 classic Revelations, as always the closer, has never looked better to these eyes, nor has its gospel truths made them tear up more than since long-ago shows at the Ailey stomping grounds, City Center Theater in Manhattan. The company has got — come on, admit it — has got to get tired of it, but at this performance you would never know it. Space prevents listing the entire roster, but particular attention must be paid to the poignant “Fix Me Jesus” of Constance Stamatiou and Michael Jackson Jr., and the fiery, hell-for-leather trio of “Sinner Man,” Solomon Dumas, Jermaine Terry, and Samuel Lee Roberts.