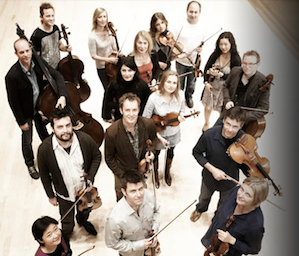 Dressed in solid black, with all but the cellists standing, the Australian Chamber Orchestra made an imposing visual impact on the Hertz Hall stage in Berkeley Saturday night. Appearances promptly became irrelevant when this superb, often startling ensemble began to play. With their warmly grave tone and daringly punctuated phrasing of the opening Adagio in Haydn’s Symphony No. 49, “La Passione,” the visitors from Down Under served notice that this was not to be any ordinary night of music making.

Haydn symphonies opened both halves of the program, in contrasting and gratifying modes. The 49th, the last of the composer’s symphonies modeled on the Italian sonata da chiesa (church sonata), was at once focused and expansive, an altogether inspired reading on the cusp of Holy Week. The first movement pulsed with the heightened drama of an oratorio, with precipitous dynamic peaks and valleys, eruptive frenzies and breath-like pauses that lent a quality of somber, almost stricken real speech.

Artistic Director and lead violinist Richard Tognetti, who leads his ACO from behind the first violin music stand, had his players off at a dizzying sprint in the Allegro. But there was much more than speed and momentum. The lower voices rose up. The horns supplied an insistent edge. Accents were all the more decisive for being so slyly placed. Bassoonist Brock Imison blurped out a charming bass line in the Menuet, which came off as both an earthy and elegantly poised interlude in advance of a whirling, whirring Presto. Haydn’s glorious 49th became a hall of wonders in this peak performance, somber, spirited, effusive and gripping.

Brett Dean’s 2011-2012 Electric Preludes for Electric Violin and String Orchestra, with Tognetti as soloist, figured to stand far apart from the Haydn opener. To be sure, in its timbres and sonorities, structure and impressionistic range, dissonant assaults and dreamy soundscapes, this six-movement work by this Brisbane native and former Berlin Philharmonic violinist was a distinct change. And yet in both its conception and execution, the piece offered many of the same virtues that came across in the Haydn. Passion and precision, an inner tensile strength and spontaneity once again went hand in hand.

In the first of these six preludes, Abandoned playground, the muted high keening of the acoustic violins created a kind of acoustic feedback loop for the soloist’s amplified meanderings. Images of slowly creaking swing chains came to mind, and as soon as they did the swings began to twist and writhe in frantic tremolos and Tognetti’s torquing arpeggios.

Brett went on to evoke, as a program note helpfully explained, the landscape and art of Papunya in northern Australia, a Rilke poem about mirrors and ancient Greek drama. While some of this electronically assisted scene painting verged on Dark Shadows-y mood music, there was plenty that was taut and involving. The spry and athletic Peripeteia turned tense and neurotic. The orchestra’s meltingly descending scales in The beyonds of mirrors played off against the electric violin’s glaring reflective surfaces.

If Perpetuum mobile lost steam and momentum in its rhythmic perserverations, the final Berceuse seemed to keep shedding soft new afterglows, by turns yearning, pained nostalgic. It all ended in a shimmering warm cloud of strings. Tognetti played with a keen sense of conviction throughout, even when his amplified tool turned shrill and staticky. He, like his ensemble, went all out all the way.

Haydn’s Symphony No. 4 is a youthful work in all ways. Short, excited, and repetitive, it brims over with a young man’s enthusiasm for what he was becoming. Tognetti and his charges didn’t try to disguise the almost comically redundant reprises of the opening Presto; they embraced them wholeheartedly, attacking each return as if it were fresh news. That set up the incandescent calm of the Andante, with the violins and violas floating weightlessly over the tender, deliberate footfalls of the ground bass. The Finale was all aimless bluster, winningly done.

This fine evening closed with an ingratiating account of Dvořák’s Serenade for Strings. Vibrato, which had been sparingly used in the Haydn symphonies, bloomed open here, but always with tact and grace. The composer’s sometimes indulgent long lines sang without curdling. The folk melodies came through trimmed in rustic colors. You could almost feel the heels hitting the dance floor in the Tempo de Valse. The Scherzo was full of urgent drive.

As the clock neared 10 p.m., spirits seemed to flag a bit in the final two movements. Dvořák’s searching Larghetto, especially, was a bit of a wash. But any disappointment was fleeting and faint. The Australian Chamber Orchestra had stood tall, stood and delivered, all night long.