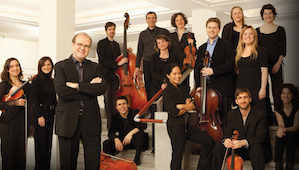 For audience members accustomed to the period instrument sonorities of Philharmonia Baroque Orchestra, American Bach Soloists, and the like, Les Violons du Roy’s Sunday afternoon visit to UC Berkeley’s Hertz Hall was a reminder of how blessed we are.

A Canadian chamber orchestra named after the band that once entertained the court of French kings, Les Violons du Roy differs from the Bay Area’s early music ensembles in how it approaches historically informed performance. Although the Canadian string players use replicas of baroque bows, they perform baroque repertoire on modern instruments and at modern pitch.

But in a concert that paired Telemann’s Suite in C major, TWV 55:C6 and J.S. Bach’s Suite No. 4 in D major, BWV 1069 (original version) with mezzo-soprano Stephanie Blythe’s performances of Joseph Haydn’s cantata Arianna a Naxos, and arias from Handel’s Guilio Cesare, an inescapable uniformity of color greatly detracted from enjoyment.

It’s one thing to miss the remarkable transparency, light, and color of baroque instruments performing at lower pitch. It’s another thing entirely to discover Music Director Labadie aiming for such uniformity of style and interpretation that instruments as diverse as the violin and bassoon seem to blend as one. It’s anything but what we hear from the modern instrument San Francisco Symphony, where Michael Tilson Thomas encourages musicians to saturate their playing with the unique colors of their instruments, rather than strive for uniformity of sound.

All of which is to say that the playing, certainly in the opening Telemann, approached the soporific. Yes, Labadie’s 19 musicians — 20 when a theorbo player joined the ensemble to accompany Blythe — were certainly capable of zippy tempos, but the texture was so thick as to vitiate their efforts.

You might argue, as one audience member I chatted with did, that Labadie’s approach laid bare the architectural skeleton of the music. Although I am not convinced this was the case — Nicola Luisotti’s approach to Verdi’s Falstaff made me far more aware of the score’s orchestral detail than did Labadie’s reading of Telemann and Bach — the structure of baroque music means nothing if the colors and texture that convey its emotional import are missing.

It took but a few phrases for Blythe, the remarkably versatile mezzo whose televised performances from the Metropolitan Opera have juxtaposed major roles in Wagner’s Ring with Handel’s Rodelinda and Gluck’s Orfeo ed Euridice, to establish her chops as a baroque recitalist. While hardly reining in her huge voice — there were few mezza fortes and virtually no hushed tones — Blythe sang with a freedom rare for anyone with an instrument of her size.

Her vocal beauty — her lower extension is gorgeous — estimable control, absolute surety throughout the range, and searing power were extremely impressive. Much of the Hertz Hall audience seemed bowled over by her powerhouse delivery of Haydn’s cantata. But even while admiring the empty and deep sound she brought to Ariadne’s discovery that her lover, Theseus, had abandoned and betrayed her, it was hard to escape the fact that her sense of tragedy was generalized, and conveyed without any brilliant insight into text or musical phrasing.

In the challenging Handel arias, which Blythe delivered with magnificence and nigh perfect technique, she excelled in expressing Ptolemy’s fury and rage in the rapid “Empio, dirò, tu sei” (I will speak of how pitiless you are) and in the vocal tour de force, “L’empio, sleale, indegno” (That wicked, disloyal, unworthy man). Nonetheless, in “Aure, deh, per pieta” (Oh breezes, for pity’s sake), as Caesar bemoans his isolation, grieving the loss of Cleopatra, it was hard to feel the heart behind Blythe’s beautifully formed phrases. Anger came easier to her than tenderness.

The sole encore, Orfeo’s great “Che farò senza Euridice” (What shall I do without Euridice), further confirmed that emotionally, Blythe would go only so far. For a heart-breaking lament, the aria was sung at such a rapid clip as to make it suitable for a mild gym workout. Once again, the mezzo’s inability to reach within the notes to express hopelessness and loss failed to elevate her undeniable vocal beauty to the realm of artistic greatness.