Some guys have all the luck — or at least it seems that way with Joshua Bell. In the last decade, the American violinist has become one of the most successful artists in classical music history, selling millions of CDs and stacking up awards like so many Legos. With his boyish good looks, it would be easy to dismiss him as the industry’s most marketable commodity. Yet his meteoric rise isn’t all hype: Sunday afternoon at Zellerbach Hall, a few thousand fans braved the wet weather to hear him in a duo recital presented by Cal Performances, and they didn’t go away disappointed. 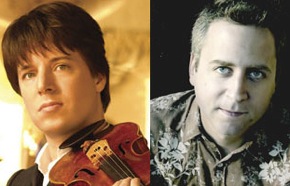 Of course, Bell’s image hasn’t hurt. Now 42, he could still pass for a Jonas Brother, and his handsome face, diamond smile, and perfectly tousled Beatle mop are a marketing department’s dream. (People magazine has already named him one of its “50 Most Beautiful People” — can “Sexiest Man Alive” be far behind?) He could easily coast on glamour, yet Bell has developed into a violinist of musical intelligence and secure technique. Appearing with his frequent collaborator, the excellent pianist Jeremy Denk, he performed sonatas by Bach, Grieg, Schumann, and Ravel, and the results were always vivacious and often ravishing.

Bell and Denk, whose last Cal Performances recital was in 2008, make a formidable team. Each is a gifted instrumentalist, adept in orchestral, chamber, and recital performance, whether playing repertory standards or new works.

Sunday, they returned in fine form. Their partnership was relaxed yet alert and adventurous, and throughout the afternoon, a concern for interpretation and illumination took precedence over surface allure.

The qualities of investigation and discovery were apparent from the outset of the program, in a luminous performance of Bach’s Sonata No. 4 in C Minor, BWV 1017. The opening “Siciliano” movement introduced the warmth and beauty of Bell’s trademark tone, while Denk’s playing defined formal precision. The movement, which recalls the mezzo-soprano aria “Erbarme dich” from Bach’s St. Matthew Passion, left more than one listener misty-eyed.

Still, Bell and Denk kept formal concerns paramount. They relished the austere urgency — not to mention the richly varied counterpoint — of the Allegro; the violinist’s poignant phrasing, set against his accompanist’s insistent triplets, yielded an Adagio of admirable nobility. If the duo conceded to theatrics in the finale, the results were no less gratifying.

Each work on the program took a giant step toward the 21st century, and the fluent performance of Grieg’s Sonata No. 3 in C Minor, Op. 45, came across as particularly forward-looking. Bell and Denk aimed for extroversion, while skirting excess, in the extended first movement; with the violinist applying glowing vibrato, the tender slow movement sounded even more wistful than usual. In the finale, Bell negotiated his double stops with ease, and the movement ended on a note of vibrant cohesion.

After intermission, Bell and Denk rose to the challenges of Schumann’s Sonata No. 1 in A Minor, Op. 105. The duo refrained from rushing or overstating the fervent outer movements; they dispatched the Allegretto with sweetness, though without a trace of the self-indulgence that often compromises readings of this composer’s music. Bell played with tonal luster and considerable finesse, and, with Denk supplying a solid foundation throughout even the most agitated episodes, the performance unfolded in a graceful balance of form and feeling.

Restraint was put aside in Ravel’s Sonata for Violin and Piano. Bell and Denk took a headlong romp through the French composer’s flirtation with American musical forms, particularly in the central movement, simply titled “Blues.” Here, the vernacular yields a striding piano part, while the violin dallies in jazzy syncopations and seductive glissandos; the propulsive figures of the outer movements, meanwhile, chug along with a drive that anticipates minimalism by nearly a century. The score places considerable demands on performers and audiences alike, but these musicians made a strong case for it. Bell took the finale at breakneck speed, with astonishing accuracy, and Sunday’s crowd responded with a standing ovation.

The duo returned for a single encore: Fritz Kreisler’s arrangement of Dvořák’s Slavonic Fantasy. It’s a crowd-pleaser under almost any circumstances, but Bell and Denk gave it a reading remarkable for its sheer sonic beauty.