The stage at Zellerbach Hall on the UC Berkeley campus is large enough to fit a full orchestra. But on Saturday night, one man stood alone on the stage with his violin, dressed in black, lit by a spotlight against a solid dark backdrop. No piano accompaniment or even a music stand — the solitary Christian Tetzlaff, playing the complete Sonatas and Partitas by J.S. Bach in a recital presented by Cal Performances. 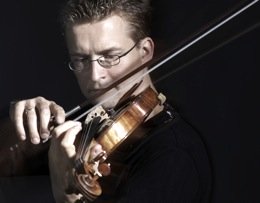 Hearing all six pieces is a completely different experience from hearing them separately in a standard, well-rounded program complemented by, say, a Classical piece, a Romantic piece, and maybe something modern. Immersed in Bach’s abstract musical language for an entire evening, a listener finds the narrative of these interconnected pieces unfolding to tell an epic story.

It starts dark and sad with the G-minor sonata, rises in a possessed fury in the B-minor partita, turns inward for the A-minor sonata, and fights an immense struggle with God and the world in the D-minor partita. Only after the famous Chaconne, which Tetzlaff referred to as “devastating” and “tormenting” in an interview, does the protagonist rise out of the ashes. After four minor-key pieces, the C-major sonata slowly ascends before finally reaching the heavenly sparkle of the E-major partita.

A lengthy concert of nothing but Bach’s gnarly notes on one instrument may seem off-putting to all but the staunchest Bach-o-philes. But just as there is nothing strange about going to the opera to hear multiple hours of music by one composer, the performance of Bach’s entire oeuvre of unaccompanied violin music felt like, well, an opera.

Bach provides sufficient variety of violin techniques to keep every movement interesting. He embeds enough character differences to populate a small German village. And Tetzlaff’s playing is captivating enough to carry an entire evening all by himself.

The sonatas and partitas are notoriously difficult: Bach condenses enough musical material for an entire orchestra into a single violin. Subsequent generations’ attempts at orchestrating these pieces have always robbed them of their densely concentrated power; it is the struggle that gives these pieces their force.

To fit full harmonies into what is usually a monophonic instrument, Bach litters the musical lines with “quadruple stops” — playing all four strings at once. The challenge is not only to finger each string with the left hand in brutal fistfuls of intonation work, but also to engage all four strings with the bow, making each string speak. Lesser violinists tend to swipe and whip their way through the dense forest of chords, and then try to fit arpeggiated melodies and fugue subjects in between.

Tetzlaff was not afraid to crack the whip when necessary (in the B-minor Bourrée or in several places in the Chaconne), but more often he was able to caress these chords as if he had gentle lute accompaniment. When not executing enormous chords, Tetzlaff traversed Bach’s topography of unending notes by soaring high and diving low, sometimes dipping into extremely soft dynamic levels that (amazingly) sounded crystal clear.

It was in these soft sections that the entire hall was held breathless. Every turn of the page in the program book and every cough or unwrapping of a cough drop was reproached by a chorus of stares. In a moment that momentarily killed the mood, Tetzlaff walked off stage mid-partita to complain about a buzzing or humming from the electricity or heating system. Whiny diva behavior, or exacting perfectionism? It is only through the latter that anybody would be able to accomplish the feat that we were witness to in this concert.

Throughout, hardcore early-music enthusiasts might have been disappointed that Tetzlaff paid no particular attention to Baroque performance practice “rules,” opting instead for a sustained sound and no extra embellishments. And, despite the seriousness of the occasion, humor was not absent. Whistles, gasps, and moans resounded from around the hall after particularly brilliant movements.

Performing just one partita requires a great deal of stamina. For this reason the concert started at 6 o’clock, with an hour-long intermission for everyone to refuel and refresh. (Even so, fatigue started to catch up with Tetzlaff in the last partita: a loss of sound, a missed note here and there, phrases that ran away.) Cal Performances provided dinner at the hall, and nearby restaurants also experienced a sudden gush of hurried concertgoers grabbing a bite to eat while discussing the performance.

Berkeley, that community of academics, was the perfect place for a concert like this. This is where, several years ago, I heard a performance of Bach’s complete Inventions and Sinfonias and then the complete “Well-Tempered Clavier.” It is most worthwhile to partake in these genre-busting marathons — to listen (or even play) a composer’s complete cycle in one session. The endeavor truly gives a sense of the composer’s world and technique, as nothing else does.