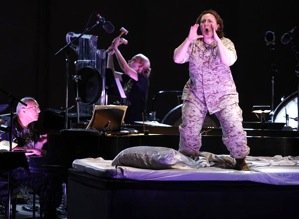 The Upshot of Upshaw at Ojai Nort

Imagine yourself a female veteran of the U.S. war in Afghanistan. Your country will this year alone spend $121 billion on the longest war in U.S. history — 9 years and counting — in which soldiers are ordered to run over infants planted in the road as decoys for the frequent ambushes of improvised warfare, and one-third of all women soldiers are raped by their American co-combatants.

You have returned home haunted by recurring nightmares. As battles over dwindling arts funding and runaway payments for police and pensions engage your fellow citizens, sounds external and internal trigger images of indescribable brutality, and unconquerable fears of atrocities and death. You take the tortures of Abu Ghraib and Guantanamo to bed, which you enter fully clothed in army fatigues and combat boots, should you be called to action at a moment’s notice. And the songs in your head, some drawn from America’s longest declared internal battle, the Civil War, and others taken from America’s legacy of spirituals, take on new and emotionally devastating meanings.

This is the scenario created by the composer George Crumb and director Peter Sellars for the astounding soprano Dawn Upshaw. Co-produced by the Ojai Music Festival and Cal Performances, The Winds of Destiny (2004), the fourth installment in Crumb’s American Songbook, received its Bay Area premiere staging at UC Berkeley’s Zellerbach Playhouse on June 16 and 18. That it took place at the same time that director Francesca Zambello was transfixing San Francisco Opera audiences with a Wagner Ring Cycle, which stresses the ecological consequences of unbridled greed, only deepened the impact. 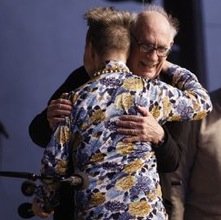 I speak in present tense, because Sellars’ staging of The Winds of Destiny, like Wagner’s Ring, inhabits your being long after the music stops. Surrounded by a small cadre of amplified, T-shirt clad musicians, including pianist Gilbert Kalish (who has long worked with Upshaw and championed Crumb’s work) and the red fish blue fish percussion ensemble directed by Steven Schick, an amplified Upshaw inhabits the universe of a newly returned veteran. Nothing is held back as she variously shoots to attention, cradles her pillow as if it were a newborn babe, and hides under the covers in fetal position as Crumb’s ever-fascinating and often phantasmagoric sounds trigger songs in her head.

Even Sellars’ best political work, including his iconic restaging of Mozart’s Don Giovanni and the premiere of Doctor Atomic, has never been known for its subtlety. What keeps his productions and direction from being labeled heavy handed is his choice of music and artists. In his staging of The Winds of Destiny, Crumb’s ever intriguing ordering of unusual sounds, which juxtaposes gasp-inducing percussive blasts with tinkling gongs, haunting whirlings, and strange marimba glissandos, benefits all the more from James F. Ingalls’ insightful lighting. Upshaw’s voice brilliantly demonstrates her complete immersion in her circumstances: It can be cracked, shorn of vibrato, or shot through with fear. Ever reflective of post-traumatic agony, it lifts the production to another plane. 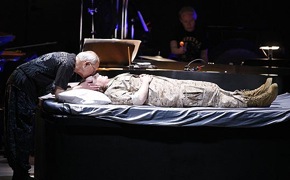 Kalish not only provides accompaniment and commentary by piano, but also sometimes stands at Upshaw’s side, providing wordless, heart-touching support. As he nurtures her, the extra resonance of friends who supported her through personal journey with breast cancer deepens this artistic experience of survival through trauma.

It is hard to assess Upshaw’s current vocal estate. For the most part, Crumb scores the songs lower than some of the soprano’s earlier, high-flying journeys into the land of Barber, Bernstein, and Stravinsky. Opportunities to display her endearing, shimmering vibrato are intentionally eschewed to underscore her emotional anguish. But when Upshaw occasionally sings a spiritual simply, without gasps and cries and broken tone, the effect is as beautiful as ever.

Sellars and the Ojai folks, bless them, did not leave the Zellerbach Playhouse audience emotionally unraveled. Occupying the second half of the program was the extraordinary Afghani expatriot Sakhi Ensemble with Ustad Farida Mahwash & Homayoun Sakhi. Performing a blend of ghazals, Afghani folk songs imbued with Sufi mysticism, and ever evolving new takes on Afghanistan’s musical legacy, these remarkable Fremont-based artists gave hope of an era of freedom and joy yet to come. 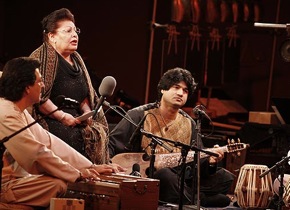 Mahwash, the only female singer to be granted the term of master (“Ustad”), was the radio voice of Afghani music in the ‘70s. At first defying the Taliban prohibition against musical performance, she eventually emigrated to the United States, from which she continues to champion Afghani music and women’s rights. Even in her undeniably golden years, her beautifully expressive voice retains remarkable range, flexibility, and soul-searing intensity. And her spirit continues to soar.

Equally astounding are rubâb virtuoso Sakhi and one of his percussionists. When the two of them got going, the other musicians joined in, and Mawash took flight, the passionate mixing of sensual and sacred was uncontainable. As much as Upshaw, Crumb, and Sellars made us want to cry, these gifted artists transcended over-amplification to leave us cheering for the art that endures devastation.

And now on to the immolation of the gods and the destruction of Valhalla. May those responsible for the unspeakable suffering that renders soldiers shell-shocked, nations and hearts nations torn asunder, and homeless people pilfering recycling bins for survival heed the example of the fallen gods who came before them.