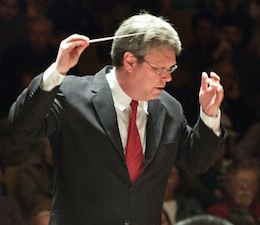 Even in the historically rich and fertile Bay Area new-music scene, there’s always room for another contemporary music ensemble. The latest addition, Berkeley’s Eco Ensemble (founded in 2011), has already proven to be a major player. In part, this can be attributed to its pedigree: The ensemble was established as an ensemble in residence at UC Berkeley’s music department, and its performances are organized in collaboration with the UC Center for New Music and Audio Technologies (CNMAT). Its music director is Cal Professor David Milnes, a passionate champion of contemporary repertoire.

Eco, which concluded its second season at Hertz Hall on Saturday, has as its mission “to bring exciting, contemporary music to both experienced audiences and new listeners.” Naturally — but not exclusively — the ensemble will give room to composers graduating from UC Berkeley.

Aaron Einbond (b. 1978) is such a composer. He received his Ph.D. in 2009 and continued his studies in London and at the prestigious Center for Contemporary Music IRCAM at the Centre Pompidou in Paris. His composition What the Blind See opened Saturday’s concert. Written for bass clarinet, viola, harp, piano, percussion, and electronics, it was originally intended for an art installation that also included a film.

In his score, Einbond seems to demand that the musicians play their instruments almost entirely in a nontraditional way. He combines and manipulates their sounds with electronics and field recordings from nature. To hear the transitions between the “acoustics” and the electronics move, shift, and disappear is fascinating, and the range of sounds that bass-clarinetist Peter Josheff produces with his instrument is especially awe-inspiring. As a whole, though, Einbond’s piece is more sound experiment than concert piece: music for the head, not the heart.

Australian composer Liza Lim’s piece Songs Found in Dream required no electronics, yet she too had her musicians manipulate and play their instruments in unorthodox ways — far outside their traditional ranges. For a performer, it must be very interesting and rewarding to study this music and see how a composition comes to life, but I wish the audience could somehow share that experience. Listening and reading the program notes doesn’t seem to be enough; there’s an extra dimension to this music that does not come across easily. By the way, am I the only one who thinks that it is slightly ironic that the sole female composer on the program was played by the only all-male selection of musicians of the evening?

To hear transitions between the “acoustics” and the electronics … is fascinating.

After intermission, Nico Muhly’s short composition Clear Music formed a much more satisfying listening experience, not least because it’s written for the amazingly beautiful combination of cello, harp, and celesta. Muhly (b. 1981) based the piece on a single measure from a motet by English Renaissance composer John Taverner (c. 1490–1545), a reference that remains well hidden but occasionally seems to be reflected in the lyrical melodies of the cello.

The Eco Ensemble concluded the concert with Tunneling, by Argentinean composer Martin Matalon (b. 1958). Matalon uses this piece to explore oppositions (weightlessness versus falling; lightness versus density) by combining instruments and blending their respective timbres to create completely different sets of sound colors. He then sends his musicians off in every possible direction, and they seem to catch each other only by accident. It made for an intriguing end to a concert that, I am sorry to say, left me largely unmoved.