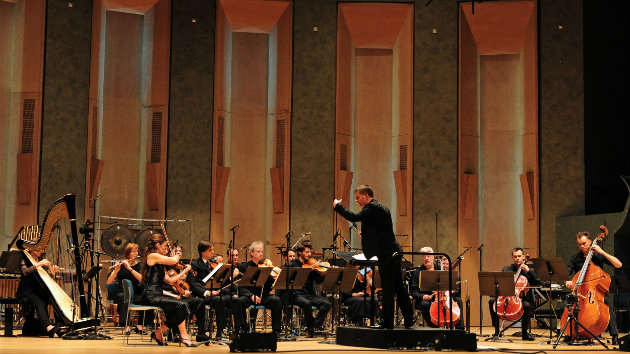 When the world’s preeminent ensemble for contemporary music comes to town, you don’t expect fanfares and a media blitz. Ensemble Intercontemporain doesn't necessarily aim to excite vast crowds, and yet UC Berkeley's Hertz Hall was fairly full for Friday's concert, the first of its residency as part of CalPerformances' Berkeley RADICAL program.

Perhaps that's a tribute to the the talent and virtuosity of this group, which turns a sometimes unsexy repertoire into a rapturous listening experience.

Founded by composer/conductor Pierre Boulez in 1976, and intended as a kind of living workshop which could synergize with Boulez’s other brainchild, the IRCAM institute in Paris, Ensemble Intercontemporain is one of a kind in contemporary music: It offers full-time employment — and the opportunity to focus entirely on their craft — to its 31 members. And that pays off in a lively and engaging performance like this one.

The Nov. 6 concert opened with Marco Stroppa’s gla-dya (2006–07), a “study in radiation” for two French horns. Stroppa harnessed the particular way by which horns project sound by arranging the duo in different configurations for each of the five movements, the bells pointing now to the back to the stage, now directly to the audience, to great timbral and acoustical effect. Drawing from an extensive technical vocabulary, the music unfolded not without a degree of humor, especially in the more rhythmically interwoven movements II and V. Some truly remarkable moments ensued, such as the throbbing sub-tones of the contra being taken over, almost imperceptibly, by a grainy, overbowed drone in the cello.

UC Berkeley Associate Professor Franck Bedrossian heard the U.S. premiere of his We met as Sparks (after Emily Dickinson), a double-duo for bass flute, contrabass clarinet, viola, and cello. Registral extremes and extended harmonic sonorities grounded the work firmly in the tradition of Spectralism (perhaps the most enduring style to emerge from IRCAM to date), as the four musicians explored the continuities of sound and noise, as well as the timbral contiguities they shared. Some truly remarkable moments ensued, such as the throbbing sub-tones of the contra being taken over, almost imperceptibly, by a grainy, overbowed drone in the cello.

A much larger ensemble took the stage for Beat Furrer’s linea dell'Orizzonte (“line of horizon” 2012), including guest electric guitarist Christelle Séry. (This guitarist wishes her a speedy promotion to full-time ensemble membership). Described by the composer as a study on doubling and the “shadowy distortion” that emerges from the interweaving voices, the music unfolded as an intricate web of duets, with occasional homophonic gestures slashing through the texture. An unforgettable closing section made of hesitant, interrupted hockets interspersed with still silences served as the perfect demonstration of Ensemble Intercontemporain Music Director Matthias Pintscher’s total attunement with his ensemble.

The second half of the evening consisted of the premiere of the intermedia piece Cluster.X, a collaboration between video artist Kurt Hentschlänger and UC Berkeley Professor Edmund Campion, with help from software by Jeff Lubow, of the Center for New Music and Audio Technologies. The original piece, Cluster, is a video projection of human figures dancing in space, drawing together into the titular assembly, and twirling incessantly, their limbs vanishing into the background, like smoke. Campion wrote a live instrumental accompaniment to the video, complementing the existing (and earth-shattering) electronic soundtrack by Hentschlänger, and further thickening the plot with Lubow’s real-time spatialization software.

In the rarified opening, a prelude of sorts set to a stark white screen, the spatialization created echoes that occasionally gave the illusion of anticipating the acoustic instruments. The choreography on the screen was announced by a monstrous, electronic crescendo, but the piece unfolded through a variety of emotional and dramatic moments, including a particularly poignant one in which the mandala-like assembly of human forms on the screen was accompanied by the first bit of near-diatonic writing of the evening. The piece, just like the rest of the evening, was eminently memorable, and it proved with conviction the transformative power of today’s most difficult music, entrusted to the care of its most stalwart champions.