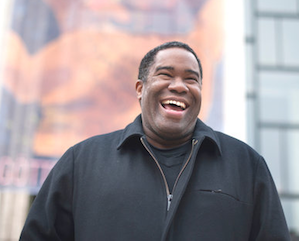 Can you recall the last time that we in the Bay Area had the opportunity to attend an art song recital by a deep-voiced bass-baritone? Not only was the rarity of Eric Owens’ Sunday afternoon debut recital with pianist Warren Jones in Berkeley’s Hertz Hall enough to make it a special occasion, but his choice of repertoire was equally extraordinary.

In place of the familiar fare usually programmed by lower male voices — Schumann’s Dichterliebe, Schubert’s Winterreise, and the like — Owens’ first set consisted of Wolf’s three Michelangelo lieder, four rarely programmed songs by Schumann, and three more by Schubert. Not only are these songs more frequently encountered in Salzburg or Berlin than in Berkeley, they are also universally dark. What a risk it was for Owens, then, to invite his audience to forego the sun and instead spend the warmest part of the afternoon descending into a landscape of despair, darkness, and death.

The surprising weight and fullness of Owens’ lowest notes were matched by a rare depth of expression.

These songs were perfectly suited to the dark gravity of Owens’ instrument and Jones’ equally impressive mastery. From the first of Wolf’s Drei Lieder nach Gedichten von Michelangelo (Three songs on poems by Michelangelo), “Wohl denk ich oft” (I often think of my past life), Owens established himself as a singer of great profundity. The brightness of his somewhat grainy top and the surprising weight and fullness of his lowest notes were matched by a rare depth of expression. When, in the second Michelangelo song, he sang the words (in translation) “Everything everywhere passes away, for time moves on, and the sun sees that everything passes away,” he didn’t just look as though he was in mourning, he sounded like it. 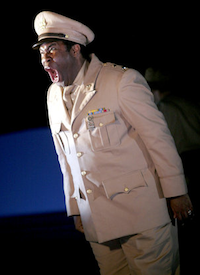 Even more unusual for a Wagnerian bass-baritone, Owens frequently pared down his sizable, if less than gargantuan, instrument to the softest thread of sound. Although it was occasionally difficult to hear him, even from the outer edge of the fifth row, his hushed stillness brought to the recital an unusual level of concentration and intimacy.

Urgency, even alarm, was within his grasp. Neither Michelangelo nor Wolf was prone to simple statements, but Owens’ ability to express so many different emotions in a single song made his performance of “Fühlt meine Seele das ersehnte Licht” (Is my soul feeling the longed-for light?) one that can stand comparison with any on record. (Note that of the 11 recordings listed at Arkivmusic, several are by Fischer-Dieskau, and only four by living artists.) Part of his success was due to accompanist Jones, whose lid-and-heart-opened-wide playing provided the storm of notes whose emotional expression Owens unfailingly amplified.

The bass-baritone opened his Schumann group with the startling exhortation of pain and believable tears of “Mein Herz ist schwer” (My soul is dark). After whispering the end of “Muttertraum” (A mother’s dream), he sensationally captured the stunning death of a foolish treasure-seeker (“Der Schatzgräber) and the cessation of the song of God’s angel. Other “wow moments” came in Schubert’s lengthy Prometheus and the momentous Gruppe aus dem Tartarus (Group from Tartarus), both of which were shattering in their impact.

Hail the Coming of the Light

As bitter and devilish as Owens’ surprising laugh sounded at the conclusion of that final Schubert song, its novelty paved the way for a very different second set. Joshing that things were about to brighten up, and thanking presenter Cal Performances “for having me back for the first time,” Owens began with three songs by Debussy. The highlight was the well-known, gorgeous “Beau Soir” (Beautiful evening).

Profundity is not an affect Owens aspires to, but rather a truth that arises from the center of his being.

Despite their beauty, both the Debussy and the “Chanson romanesque” (Romanesque song), the first of Ravel’s three Don Quichotte à Dulcinée, call for even more of a seamless legato than Owens could produce. They also demand flawless intonation, which was not Owens’ strong suit on this occasion. Too often, phrases that initially seemed too soft to be heard distinctly came into focus as vowels changed and pitch resolved.

This is not to suggest that the second set was devoid of greatness. Owens’ voice and temperament were ideal for the prayerful profundity of Ravel’s “Chanson épique” (Epoch song), and his tipsy humor was a joy in “Don Quichotte’s Drinking Song” (“Chanson à boire”). Equally suited to his gifts was the lengthy final song, Wagner’s rarely performed “Deux grenadiers” (Two grenadiers), whose extended section for solo piano gave Jones yet another opportunity to share his expressive eloquence.

The duo’s encores were anything but gratuitous little ditties. Owens’ gorgeous rendition of Purcell’s “Music for a While” gave him yet another opportunity to share his marvelous half-voice, while his exquisite rendition of gospel composer Robert Lowry’s “Shall We Gather at the River?” confirmed that, for him, profundity is not an affect he aspires to, but rather a truth that arises from the center of his being. A perfect recital? Perhaps not. But a great one? Most definitely.