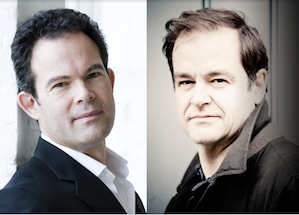 By the start of the second stanza of “Gute Nacht” (Good night), the first song of Franz Schubert’s chilling 24-song cycle, Winterreise (Winter Journey), it had become clear to the Sunday afternoon audience in UC Berkeley’s Hertz Hall that baritone Gerald Finley and pianist Julius Drake had pondered long and hard over their interpretation. First there were the hints of desperation as Finley, in superb voice, sang “Ich kann zu meiner Reisen / Nicht wählen mit der Zeit” (“I cannot choose the time / For my journey”).

Moments later came a half-suppressed cry as Finley anxiously rubbed his hands together. When he sang, in translation, “Love loves to wander, God has made it so,” he even sounded angry at God for causing his pain. Then, after the baritone slowed down to wish his sweet love a tender good night, and Drake slowed even more, Finley softened his voice as if singing a lullaby. There were several hints of sweetness before the last line was repeated loudly, with an air of finality.

It was an initially impressive showing in which, in short order, Finley displayed the huge range of vocal colors at his disposal. True, his lowest tones seemed unvaryingly dark, even dangerous — they felt like the sounds of a man whom you might not wish to be locked in a room with — and not of one piece with the rest of the voice. But once he rose higher into his range, he seemed capable of varying his tone at will.

What transpired after that, however, dashed the initial promise that the first songs had delivered. Amid dramatic changes in volume and color and any number of churning emotions — one of the cycle’s sweeter songs, “Der Lindenbaum” (The linden tree), was completely devoid of consolation — Finley and Drake indulged in the first of many pregnant pauses between verses and songs.

Hand in hand with those pauses, which are not indicated in the score, came any number of final repeated phrases that the duo chose to differentiate by either markedly slowing down the second time around or terminating with loud emphasis. As the willful pattern continued, without justification in either music or text, it began to seem that a virtually obsessive desire to create a unique interpretation, rather than Schubert’s response to Wilhelm Müller’s poetry, was dictating what would come next. The huge pauses in the other famously sweet song of the cycle, “Frühlingstraum” (Dream of Spring), seemed arbitrary, even gimmicky. Ditto the frequent descent from slow to slowest, and Drake’s implausible lingering in a verse that included the line, “My heart still beats so ardently.”

Yes, there were many gorgeous vocal sounds, and Drake’s pianistic effects, especially the deeply communicative horses’ gallops in “Die Post” (The mail-coach), were equally arresting. But the insistent pauses and slowdowns came so frequently, and in such a formulaic pattern, as to render great music disturbingly melodramatic. Were the horses so emotionally moved by our protagonist’s plight that they, too, were impelled to slow down at the end of “Die Post”?

When Finley and Drake actually took several songs at a steady tempo, it seemed as though the duo had chosen to take a higher path. But the departure from calculation was lamentably short lived. The long, long pause at the end of “Der Wegweiser” (The signpost) and the glacial pace of “Das Wirtshaus” (The inn) made no sense.

Perhaps only the Mona Lisa’s smile has elicited as much speculation as Winterreise’s famously haunting last song, “Der Leiermann” (The organ-grinder). Is it an obituary, a final cry of emptiness or madness, or a sign that the journey is far from complete? Here, the song was the slowest of the lot, with Drake solemnly drawing out each chord between the first and second verses. Then, after seemingly interminable lingering, the final line was voiced as a startlingly desperate cry.

“Fremd bin ich eingezogen, Fremd zieh ich wieder aus” (A stranger I came, A stranger I depart); thus does Schubert begin the cycle. It would be consoling to think that Finley and Drake intended to tell the tale of a man so deeply troubled, so overpowered by his internal demons, that his true personality could never emerge.

If so, they succeeded admirably. But as the last notes of the piano faded into silence, it was hard not to feel that, instead, the duo had displayed every card in their deck in an attempt to create a unique interpretation that would set them apart from the pack.