Founded in 1815, the Handel and Haydn Society has been making history for nearly two centuries — today, it is America’s oldest continuously performing arts organization — and the venerable Boston-based period instrument ensemble once again made history in Berkeley over the weekend.

Launching its west coast tour under the auspices of Cal Performances, the organization also known as H&H started its weekend residency with a master class by its harpsichordist, Ian Watson, and presented a program of Baroque works including Vivaldi’s Four Seasons. But the main event was a performance of Handel’s Jeptha. H&H premiered the work in the U.S. in 1855, and the Berkeley audience became the first to hear the ensemble perform it since 1867.

Saturday’s concert performance in First Congregational Church, which featured the H&H orchestra, chorus and six vocal soloists, offered a rare opportunity to hear the organization under artistic director Harry Christophers. Now in his fourth season with the ensemble, Christophers elicits a rich, cultivated sound from these musicians. The strings, led by concertmaster Aisslinn Nosky (who perched on a stool at the front of the orchestra throughout the evening), play with a vibrant edge, and the rest of the orchestra follows suit; the woodwinds voiced expressively throughout the performance, and the Baroque horns made shapely contributions. If Bay Area audiences have come to expect greater dramatic emphasis in their Handel performances — the Philharmonia Baroque Orchestra under Nicholas McGegan gave a thrilling account of the composer’s Teseo in this very space two weeks earlier — Christopher’s flowing, patrician approach still yielded considerable rewards. 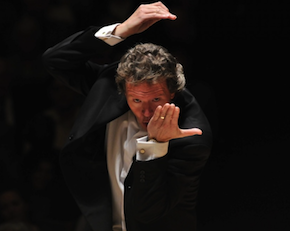 With its late-life themes of forgiveness and reconciliation, Jeptha made an excellent showcase for the ensemble’s skills. Set to a libretto by Reverend Thomas Morrell, the oratorio is based on the Old Testament story of a leader whose promise to God nearly costs him his beloved daughter. On the eve of battle with the Ammonites, Israel’s Jeptha is filled with dark forebodings; he vows, if he is victorious, to sacrifice the first person he sees on his return. When he comes back a hero, that person turns out to be his daughter, Iphis. Divine intervention figures prominently, and family bloodshed is averted with the arrival of a merciful angel.

Christophers marshaled his forces with a firm hand from the beginning, striving for linear continuity and elegant phrasing from his compact, 30-member orchestra (which shares at least one member, oboist Gonzalo X. Ruiz, with the Philharmonia Baroque Orchestra). The continuo group included organ and harpsichord, and there were fine individual contributions — Christopher Krueger’s lovely flute solo in the aria “In gentle murmurs,” diaphanous strings, featuring Nosky, in the accompagnato episodes.

Leading the vocal soloists was Robert Murray, who wielded his large, sturdy tenor with anguish in the aria “Open thy marble jaws O tomb” and subdued eloquence in Act 3’s sublime “Waft her, angels.” As his wife, Storge, mezzo-soprano Catherine Wyn-Rogers offered a florid account of “Scenes of horror,” and soprano Joelle Harvey imparted lithe, silvery sheen to the role of Iphis. Countertenor William Purefoy sang with clear, ardent tone as Iphis’s lover, Hamor. Baritone Woodrow Bynum declaimed forcefully as Zebul, and Teresa Wakim introduced a gracefully floated soprano as the Angel. Murray , Wyn-Rogers, Purefoy, and Bynum achieved a luxuriant blend in the Act 2 Quartet; the addition of Harvey in the Act 2 quintet made the sound sublime.

Still, the greatest moments in this Jeptha came from John Finney’s Handel and Haydn Society Chorus. Thirty members strong, and exquisitely dynamic, the group, singing as priests, virgins and Israelites, summoned the oratorio’s touching episodes of pathos (“O God, behold our sore distress”) and drama (“When his loud voice in thunder spoke”) with poise and fervency. “How dark, O Lord, are Thy decrees,” which brings Act 2 to a majestic end, was a shining example of Handelian transcendence.