If you wanted to pair diametric opposites on a piano recital, you might choose the complete Ligeti Études and Bach’s Goldberg Variations, two monumental works that at first glance seem psychologically light years apart. This was Jeremy Denk’s Bay Area solo debut program, sponsored by Cal performances at Hertz Hall on Sunday. It promised to be an auspicious one, and I couldn’t wait to see if he would pull it off. 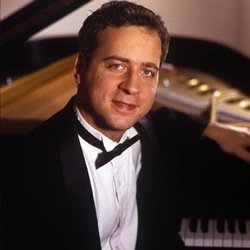 It didn’t bother me much that Denk had decided to play only five of the first book of Ligeti Études and cancel the rest. From my vantage point on stage (I had been asked to turn pages for the Ligeti at the last minute!), it seemed the perfect adrenaline rush — for both of us — to kick off the concert. He tore into the pieces beginning with “Disorder,” a study in cross accents where both hands madly alternate octaves and single notes, each going their own way and never coinciding, with never a downbeat to synchronize them. Denk reveled in this madness and made it thrilling. The slower but no less challenging études “Open Fifths” and “L’Arc en ceil” shimmered with rainbowlike color.

The haunting final étude, “Autumn in Warsaw,” is a whirlpool of shifting textures that holds you tight in its grip despite the sense that the center really cannot hold. Just following the pianist was dizzying, as he went full tilt with this maniacal music until everything finally slides off the lower depths of the keyboard. It would have been hard to follow that (even with more Ligeti) and I was grateful to able to take my seat at a safe distance with the rest of the audience.

Yet, what followed was somewhat puzzling. When it was announced that Liszt’s “Dante” Sonata from the Second Book, “Italie,” of the Années de Pèlerinage would close the first half of the program, it seemed that a 19th-century work with a literary reference would be a logical choice for Denk, who is an avid reader of Proust. After Reading Dante is the actual title of the sonata, and as Denk told the audience before he began the piece, “We’re not sure whether we will choose Heaven or Hell after listening to it.” This may be true, for like most virtuosos who succumb to the fire and brimstone of Liszt’s blazing octaves, the solace found in the quiet sections might seem a bit tame.

If Denk took his audience by force in the first half of his recital, I looked forward to a change of pace with Bach’s Goldberg Variations, which pose technical challenges of a different order. Just as 19th-century audiences had to wait some years before the demonic virtuoso in Liszt played itself out and there was no longer a need to parade his pianistic prowess, we today are more in need of the reflective, philosophical artist, the one who actually reads Dante and Goethe and translates their deepest thoughts into music. An artist who goes from Liszt to Bach (rather than the other way around) has to decide if he can reach his audience on a deeper level, one that finally has little to do with playing the piano.

Music of the Eternal

Profound and humorous by turns, Goldberg Variations comprise 30 pieces, including nine relatively sober canons alternating with various contrapuntal and lyrical pieces. If played properly, the Goldberg Variations do not induce sleep. This is anything but dry, soporific music from antiquity. The variations pose a unique challenge to today’s performers, especially when played on the piano, since many require a two-manual harpsichord, as the voices tend to cross and collide, Ligeti-like.

And yet, despite the virtuoso passages, this is essentially intimate music of reflection (“Andenken,” to paraphrase Denk’s blog): a one-on-one experience, psychologically a world apart from the Liszt and Ligeti that preceded it. Above all, the music needs time to unfold if we are to experience the sense of the eternal that it represents. Denk began deliberately, playing both repeats of the aria on which the 30 variations are built, signaling that we might hear them too, played with all the repeats: a rare experience. Yet it was not to be. After a beautiful, if rather over-ornamented version of the aria, the tempos increased, the repeats vanished, and we did not have time to take in the imitative counterpoint of the canons, or even the brilliance of Denk’s keyboard mastery. Denk took the fast variations at such a breakneck pace that the passagework ran together, and even nearly broke down at points. Above all, the experience of the contrasting affect, essential in Bach, was lost. The progressive slowing down of the three minor-key variations did not touch, let alone break, our hearts as they might have.

Yet there was one variation — No. 13, the most modest and unassuming of the set, based on a simple turn that’s elaborated in a graceful arabesque — that stood out in the simple, introspective way Denk played it. Bach’s spirit was palpable in the hall.